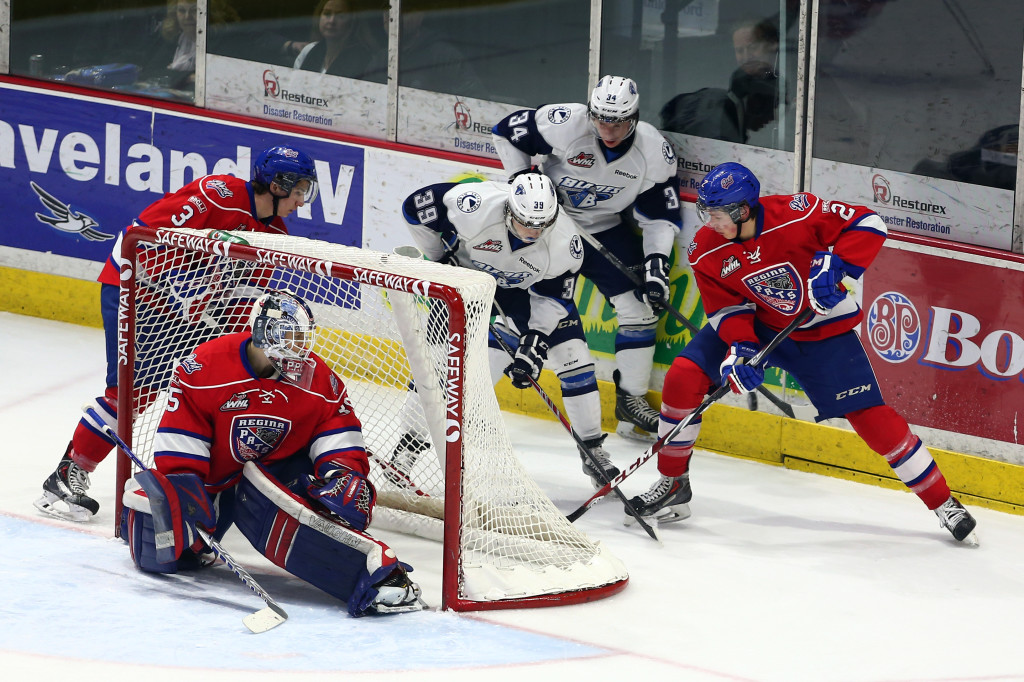 Blades starting goaltender Brock Hamm went untested through the first 10:30 of the game, while Daniel Wapple made eight fantastic stops before the media timeout. The Blue and White eventually mounted some pressure and shots on Hamm, but it was close to the expiration of the first frame. With 42 seconds to go in the stanza, Pats defenseman Connor Hobbs and the Blades’ Nick Zajac went toe-to-toe in a spirited tilt, which ended to the applause of the crowd. Zajac was also assessed a checking from behind minor on the play. After twenty, the game was scoreless with the Blades ahead on the shot clock, 13-7.

In the second, Braden Christoffer opened the scoring for the Pats on the powerplay when his centring pass deflected off Isaac Schacher’s skate and into the back of the cage. On a delayed penalty to the Blades, Jesse Gabrielle spotted Carter Hansen backdoor where the pinching blue liner redirected home the biscuit to give the Blue and White a 2-0 lead. A second penalty was delayed, though, which resulted in Schael Higson sitting a pair for hooking. However, the Blades’ forward left the box with no change to the score. About 30 seconds after Higson’s minor expired, Jesse Gabrielle put the Pats up by three when he scored his 18th of the season. The Pats’ Luc Smith and the Blades’ Chasetan Braid dropped the mitts in what was an all-out offensive affair with helmets and fists flying. At the end of the scrap, Smith gave Braid friendly “good job” tap on the back. The Queen City Kids played the final minutes of the second frame shorthanded. With 40 minutes gone, the home team led, 3-0, and the shots were knotted up at 21 apiece.

Wapple kick-started the third stanza with a flurry of left pad saves on Zajac. Pats’ call-up Adam Berg took part in the fisticuffs when Garrett Armour engaged with the forward. Armour picked up an extra roughing minor during the stoppage. With the Blue and White on the powerplay, Ryan Graham broke wide on the home team’s defense and slide one between the wickets of Wapple to put an end to the goaltender’s potential for a shutout. Moments later, Brooks potted his 21st of the campaign to restore the Pats’ three goal lead. With the shots 33-27 in favour of the Blades, the Queen City Kids closed out the game strong with a 4-1 win.

The Pats return to action tomorrow night when they play host to the evenly matched Red Deer Rebels in a 7:00 puck drop.  Tune in with Home Depot Pats Hockey on 620 CKRM or WHL Live Web TV.