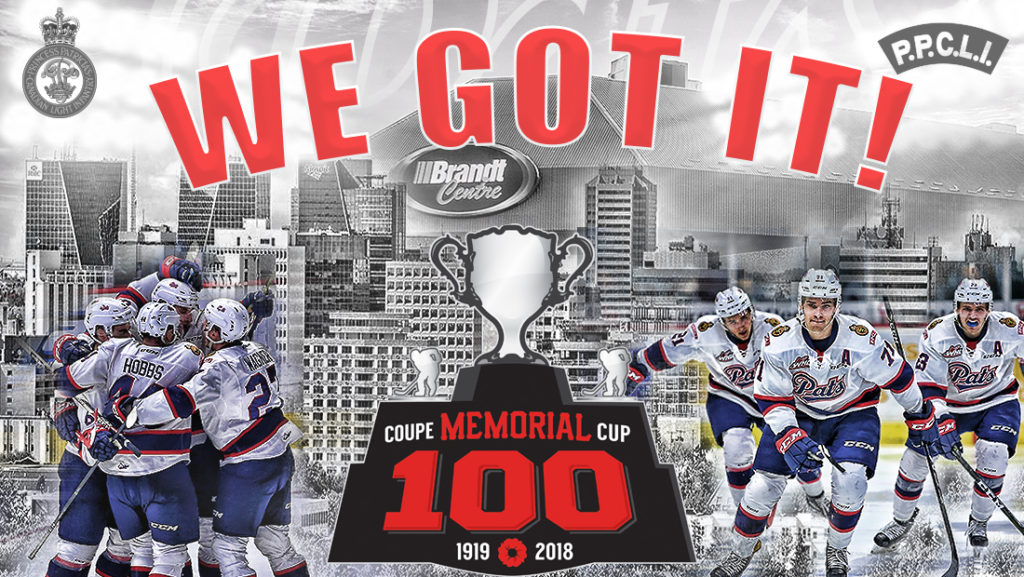 Toronto, ON – The Canadian Hockey League today announced, on behalf of the 2018 Mastercard Memorial Cup Site Selection Committee, that the Regina Pats Hockey Club will host the historic 100th edition of the league’s prestigious national championship.

“The 2018 Mastercard Memorial Cup and the celebrations around this centennial event will truly capture, preserve, and enhance the legacy of one of the most prestigious trophies in all of sport while honouring the brave men and women who served and continue to serve our country,” said CHL President David Branch. “I applaud our national Site Selection Committee who were challenged with the decision of choosing between three outstanding bids.  On behalf of the CHL we look forward to working with the City of Regina and the Regina Pats to engage the entire nation in what will truly be a historic event.”

The announcement was delivered before a national audience as part of Sportsnet’s Hockey Day in Canada coverage.

The 100th Mastercard Memorial Cup will take place May 17-27, 2018, at Regina’s Brandt Centre, featuring the host Pats along with the champions of the Western Hockey League, Ontario Hockey League, and the Quebec Major Junior Hockey League competing in the traditional round-robin tournament format.

“Our local team worked hard to put together a great bid, and we are extremely excited, and honoured, to be able to host the 100th Mastercard Memorial Cup,” says Shaun Semple, President and CEO of the Brandt Group of Companies and Chair of Regina’s Host Organizing Committee. “We’ve got some great ideas and plans, and we look forward to the opportunity to engage with junior hockey fans across the country, as we celebrate this historic centennial year.”

The prestigious national championship returns to the city of Regina for the first time since 2001, an event that featured the host Pats, the Ottawa 67’s (OHL), and champion Red Deer Rebels (WHL) defeating the Val-d’Or Foreurs (QMJHL) 6-5 in overtime.  Regina also hosted the 1980 event with the Brandon Wheat Kings.

Named for the Princess Patricia’s Canadian Light Infantry, the WHL’s Pats are the CHL’s oldest franchise beginning operations in 1917, and celebrating their 100th anniversary next season.  The club has competed in a record 12 Memorial Cup Championship games including the inaugural final back in 1919 before winning major junior hockey’s prize three times in 1925, 1930, and 1974.

The Memorial Cup has a rich tradition that has shaped the way junior hockey is played in North America. The trophy was originally known as the OHA Memorial Cup and was donated by the Ontario Hockey Association in March, 1919, in remembrance of the many soldiers who paid the supreme sacrifice for Canada in the First World War.  In 2010 the Memorial Cup was rededicated to the memory of all fallen Canadian Military Personnel killed in combat serving our country.

The 99th edition of the Mastercard Memorial Cup will be hosted by the Windsor Spitfires May 18-28, 2017, with all nine games to be broadcast live across Canada on Sportsnet and TVA Sports.