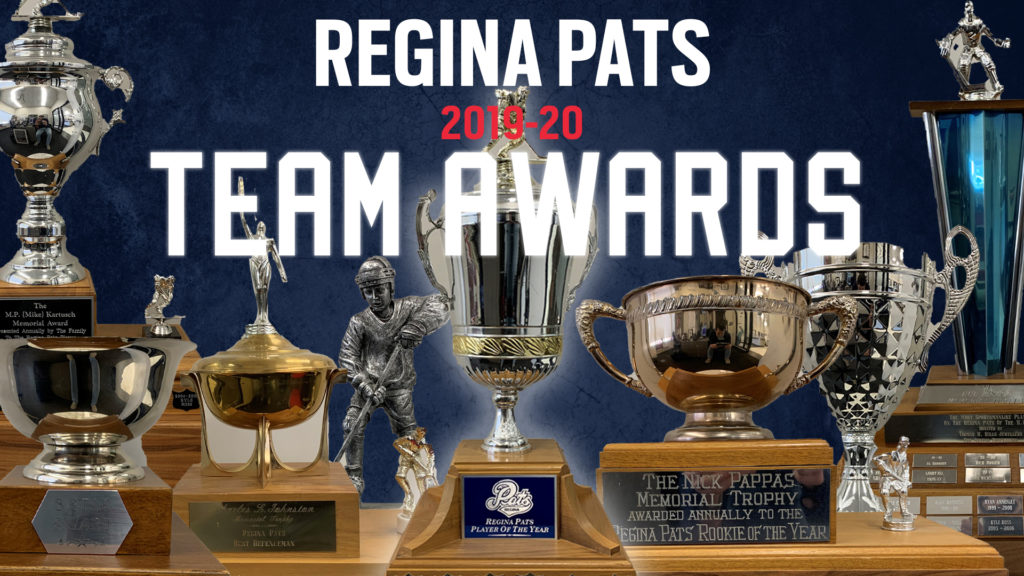 The Regina Pats Hockey Club is pleased to announce their individual award winners for the 2019-20 season. The Pats present 10 awards recognizing the individual accomplishments of members of the team every year.

Player of the Year – Robbie Holmes
Forward Robbie Holmes was named the Regina Pats Player of the Year. The 20-year-old set career highs with 19 goals, 29 assists and 48 points in 57 games. He put up four game winners, four powerplay markers and one shorthanded goal. The product of Sherwood Park, Alberta finished his WHL career, playing in 231 games, scoring 51 goals and 114 points in that stretch. Holmes was originally drafted in the 11th round of the 2014 WHL Bantam Draft.
2017-18 Award Winner: Austin Pratt

Charles Johnston Memorial Top Defenceman – Ryker Evans
Ryker Evans enjoyed a breakout sophomore season in 2019-20, setting a career high seven goals and 24 assists for 31 points in 63 games. Well surpassing his previous high of one goal and 11 points in 45 games in 2018-19. The Calgary product was second among all Pats defencemen with his 31 points and posted 81 penalty minutes and 138 shots on goal to go along with two game winning tallies.
2017-18 Award Winner: Nikita Sedov

Rick Rypien Memorial Award (Unsung Hero) – Nikita Sedov
18-year-old defenceman Nikita Sedov was given the Rick Rypien Memorial Award as the Pats Unsung Hero for 2019-20. In 58 games this year, Sedov posted the first five goals of his WHL career and added 10 assists for 15 points. From Tyumen, Russia Sedov was a mainstay on the back end for the Pats, providing a consistent effort every night.
2017-18 Award Winner: Duncan Pierce

Nick Papas Rookie of the Year – Drew Englot
Forward Drew Englot has been named the Pats Rookie of the Year for 2019-20. The 17-year-old took great strides in his first season in the WHL, scoring 12 goals and six assists for 18 points in 58 games. The product of Candiac, Saskatchewan had a strong second half to the season, scoring nine of his goals and 12 points in 27 games after the Christmas break.
2017-18 Award Winner: Riley Krane

Hub Bishop Most Sportsmanlike – Zach Wytinck
Defenceman Zach Wytinck was assessed just 18 minutes in penalties through 59 games of the season. The 20-year-old has averaged less than half a penalty minute a game this year and finished tied for 12th among all WHL defenceman with 47 points. His 38 assists were tied for ninth among WHL rear guards.
2017-18 Award Winner: Austin Pratt

Mike Kartusch Community Service Award – Kyle Walker
Kyle Walker’s enthusiasm and willingness to participate in community events made the Pats veteran defenceman a fan favourite. Working with kids at schools, as well as supporting the Canadian Mental Health Association, Walker has been a credit to the Pats and the community this year. He made over 20 community appearances this season.
2017-18 Award Winner: Liam Schioler

Bill Hicke Most Popular Player – Robbie Holmes
The Pats forward and fourth year player ran away with the fan voting for this award. The 20-year-old has been a great Pat in his career and the fans showed their appreciation of his career in the online votes.
2017-18 Award Winner: Liam Schioler

Torchey Schell Top Scorer Award – Austin Pratt
Captain Austin Pratt takes home the Pats Top Scorer Award for the second consecutive season. The 20-year-old set a new career high with 57 points in 63 games and put up 108 points in his last two seasons in the WHL. Pratt scored 20 goals and added 37 assists in 2019-20, leading the Pats with 235 shots on goal. The product of Lakeville, Minnesota scored four times on the powerplay, once shorthanded and had two game winners. Pratt played in 317 games in his WHL career, scoring 76 goals and 98 assists for 174 points.
2017-18 Award Winner: Austin Pratt