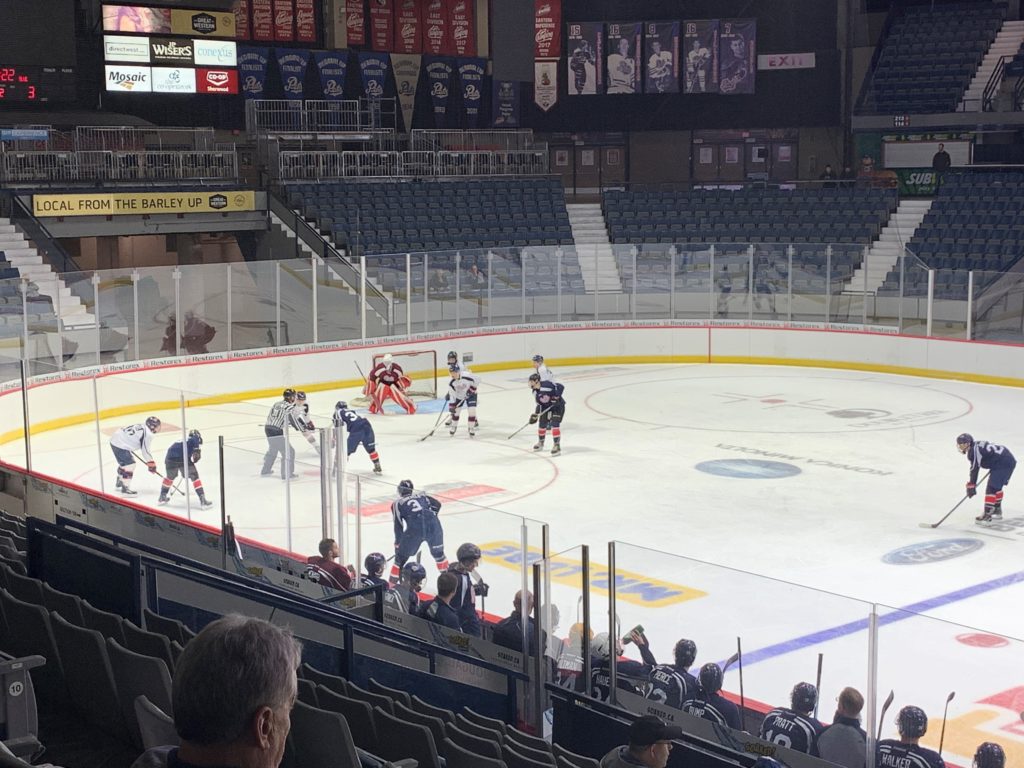 The Regina Pats Hockey Club held their final full day of 2019 Training Camp on Sunday. The club will host its annual Blue and White intrasquad game on Monday night at 7 at the Brandt Centre.

The morning began with a practice for several rookies at 9 a.m. The first actual scrimmage of main camp took place at 11 a.m. with several rookies moving up to play with the veterans in the game. In the first period, Ryker Evans opened the scoring for Team Hobbs when he stole a pass in the offensive zone and ripped it into the top of the net to make it 1-0. Team Mahura responded when Haydn Delorme finished off a nice passing play with Cole Dubinsky to tie it up 1-1. Brayden Barnett then gave Team Mahura the lead with a nice shot into the top of the net, assists to Dawson Holt and Robbie Holmes and it was 2-1. Team Hobbs drew even with eight minutes left in the period when Logan Nijhoff intercepted a pass, beat one man and then snapped it inside the far post to make it 2-2. Hobbs gained the 3-2 lead in the dying seconds when Josh Paulhus jammed one in at the near post and that was the score after the opening period. Max Paddock made 13 saves in goal for Team Mahura, Matthew Pesenti stopped 18 for Team Hobbs. In the second, Carter Massier extended the lead for Team Hobbs, Sloan Stanick and Jake Johnson drew assists on the 4-2 goal, five minutes in. Easton Armstrong drew Team Mahura within one a short time later on a nice snapshot from the left circle. Team Hobbs restored the two-goal lead when Sloan Stanick finished off a nice move in front on the backhand to make it 5-3. Logan Nijhoff drew the initial assist on the goal. Mahura got back to within one when Cole Dubinsky put a backhand shot off the crossbar and Cale Sanders cleaned up the rebound to make it a 5-4 game. Seconds later, Austin Pratt scored on a nice individual effort, pulling the puck to his backhand and picking up his first of the day and Team Hobbs led 6-4. Bryce Howard scored on a breakaway for Team Hobbs with 11 minutes left, Logan Hauer set him up and it was 7-4. Hobbs kept coming and Carter Massier would score his second of the scrimmage from the right circle, Sloan Stanick with an assist, got to three points in the game. Next, Duncan Pierce scored on a pass from Austin Pratt and it was 9-4 Team Hobbs. Brayden Barnett got one back for Team Mahura, his second of the day, from the left circle, and it was 9-5, that was the final. Dean McNabb made eight saves for Team Hobbs in the second, Liam Stevens 11 saves for Team Mahura.

Team Hobbs and Team Mahura met again in the evening, 2019 second round pick Samuel Huck arrived in Regina in time for the game. In the first period, Team Hobbs opened the scoring three minutes in when Austin Pratt scored off the rush on the left wing, assist to Alex Bump and it was 1-0. That was the score after one, Dean McNabb stopped all 24 shots he faced for Team Hobbs, Max Paddock made 15 saves on 16 shots for Team Mahura. In the second, Austin Pratt scored again to make it 2-0 Team Hobbs, assisted by Duncan Pierce and Marcus Taylor. Brayden Barnett responded for Team Mahura to cut the lead to 2-1, Dawson Holt picked up a helper on the marker. Hobbs restored their two-goal lead when Cole Gordon scored on an assist from Marcus Taylor. Team Mahura got it back when Tyson Feist scored on a shot from the right point, Dawson Holt and Robbie Holmes picked up the assists to make it 3-2, but that was how it ended. Liam Stevens made 12 saves on 14 shots in goal for Team Mahura, while Matthew Pesenti stopped 21 of 23 for Team Hobbs.

The Pats will conclude their 2019 Training Camp on Monday night with the annual Blue and White intrasquad game at 7 p.m. at the Brandt Centre. Admission will be $2 at the door.

The Pats will kick off the 2019 pre-season on Tuesday, August 27 in Moose Jaw against the Warriors. The first home pre-season game will be August 30 at 7 p.m. against the Saskatoon Blades, tickets are $5 at the door. Pats 2019-20 Season Tickets are on sale now at reginapats.com.