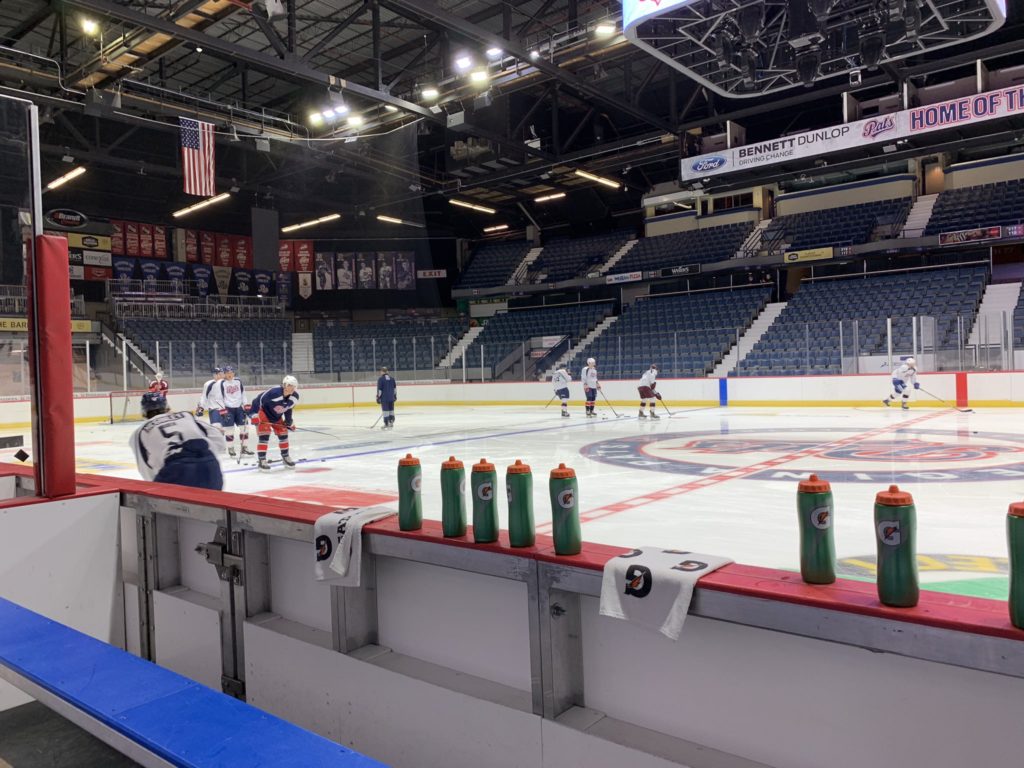 The morning began with practices for both main camp teams and then a scrimmage between the rookie squads of Team Brooks and Team Steel. In the contest, Team Brooks took the 1-0 lead with 9:37 left when Sloan Stanick (Trade EVT) scored off the rush from the left circle, Easton Armstrong (10th Rd 2018) drew the first assist. Liam Bechtold (FA invite) made 8 saves in goal for Team Steel, Liam Stevens (List) stopped all nine shots he faced for Team Brooks. In the second, Stanick scored his second of the game for Team Brooks to make it 2-0 early. Team Steel got on the board eight minutes later when Parker Berge (8th Rd 2018) fed Carter Cormier (5th Rd 2019) for a breakaway and he buried into the top of the net to make it 2-1. Keefe Gruener (FA Invite) tied it up for Team Steel with just over five minutes left and it was a 2-2 game. Regulation didn’t solve a winner and the game went to a shootout. Carter Cormier gave Team Steel the 1-0 lead in round one, but Colby Wotton tied it for Team Brooks in the third round. Five rounds later, Marcus Taylor scored the winner and Team Brooks won the contest 3-2. Liam Bechtold finished the game with 34 saves for Team Steel, while Liam Stevens and Matthew Kieper combined to make 19 saves in the win.

Pats TV caught up with Sloan Stanick on Saturday:

Main camp continued with some mini games at 4 p.m. before giving way to the fourth rookie scrimmage of camp at 6. In the first period, Team Brooks went up 1-0 early when Arik Altman (FA invite) scored from in tight at 1:51. Altman scored again with 6:39 left in the first to give Team Brooks the 2-0 lead. Team Steel got on the board with just under five minutes left when Alex Bump (FA invite) tucked one five hole and it was 2-1, that was the score after the first. Liam Stevens made 14 saves on 16 shots for Team Steel while Matthew Kieper stopped eight of nine for Team Brooks. In the second, Arik Altman continued his strong play, setting up Evan White (FA invite) in the slot and he scored to make it 3-1. Brooks extended the lead to 4-1 thanks to Marcus Taylor 10 minutes into the frame and that was the final score. Matthew Kieper stopped 20 of 21 in the victory, while Liam Stevens and Liam Bechtold combined to make 28 saves for Team Steel.

The Pats will continue their training camp on Sunday with ice sessions starting at 9 a.m. at the Brandt Centre.

The Pats will kick off the 2019 pre-season on Tuesday, August 27 in Moose Jaw against the Warriors. The first home pre-season game will be August 30 at 7 p.m. against the Saskatoon Blades, tickets are $5 at the door. Pats 2019-20 Season Tickets are on sale now at reginapats.com.