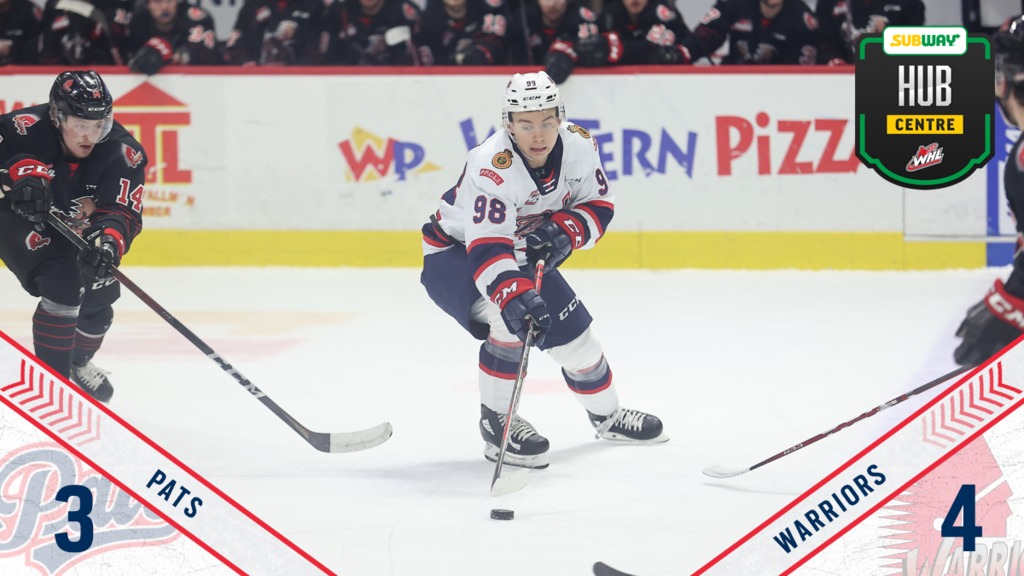 REGINA – Two second period goals in 34 seconds weren’t enough for the Regina Pats Monday afternoon against the Moose Jaw Warriors, as the Warriors earned a 4-3 shootout win inside the Subway WHL Hub.

After a scoreless opening period, the Pats got goals from rookie defencemen Parker Berge and Layton Feist at 14:43 and 15:17 respectively. Berge’s opener was his first in the WHL and sparked an afternoon when all of Regina’s offence came from the backend.

Ryker Evans’ second of the season 5:01 into the third gave Regina a three-goal cushion, but for a second time in three games against the Warriors this season, the lead wouldn’t hold.

Jagger Firkus sealed the comeback win with the shootout winner, as the Warriors outscored the Pats 2-1 in the breakaway department.

“A disappointing outcome, yes, but what a great game. Our guys played so hard. Their goalie was hot,” said Pats head coach of Moose Jaw netminder Alex Mirwald, who stopped 29 of 32 shots opposite Regina’s Matthew Kieper, who stopped 36.

“We out chanced them with prime scoring opportunities tonight and their goalie was good. There’s no doubt about it. There’s absolutely nothing for us to hang our heads about.”

“Some nights this just happens, and that’s the message to the guys, because there are nights that you play like this and you lose. The other team played hard and played good too, so it’s unfortunate that we’re the losers tonight.”

Monday’s game was the third time in as many games Regina and Moose Jaw needed regulation, after the Warriors earned a 5-4 overtime win March 16, and Regina a 3-2 OT victory March 30.

“It was a good hockey game. As we said the other night, those are the things you play the game for,” Struch pointed out.

Kyle Walker was the brightest offensive spot for Regina on the scoresheet, as the 20-year-old picked up a pair of assists on a night Connor Bedard’s career opening point streak finally came to a halt. Bedard, who scored Regina’s lone goal in the shootout, sits at 22 points through 13 games.

Regina returns to action Tuesday night when they look to go three-for-three this season against the Swift Current Broncos. Puck drop is 8 p.m.