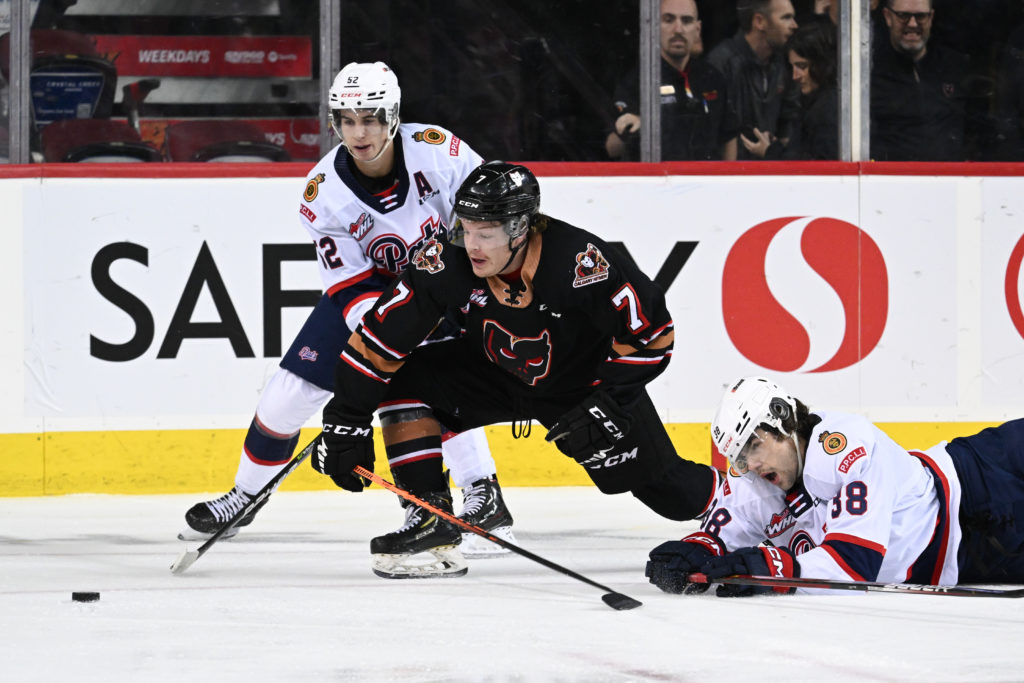 Calgary, Alta. — The Calgary Hitmen were not gracious hosts on Sunday for the Regina Pats as the hometown Hitmen defeated the Pats 7-3 at the Scotiabank Saddledome.

Oliver Tulk led the way for the Hitmen with a hat-trick for the victorious Hitmen. Grayden Siepmann, Matteo Danis (first career goal), Zac Funk, and Riley Fiddler-Schultz rounded out the scoring for the Calgary crew. Brayden Peters stopped 23 shots in the win.

Jaxsin Vaughan and Alexander Suzdalev each scored their first career markers for the Pats in a losing effort. Tye Spencer rounded out the scoring while Koen MacInnes kicked out 38 shots in the loss.

Alexander Suzdalev buries his 1st career goal in @TheWHL on the power play off a great feed from Svozil!

CGY 0-1 at 14 seconds — Grayden Siepmann (1), assisted by Sean Tschigerl and Zac Funk // Right off the opening faceoff, the Hitmen wound up with a three-on-one and Siepmann put the rebound past Koen MacInnes to give the Hitmen a 1-0 lead just 14 seconds into the game.

CGY 0-2 at 1:46 — Oliver Tulk (2), assisted by Tyson Galloway and Jacob Wright // The Hitmen won an offensive zone faceoff to the left of MacInnes, and Galloway took a shot from the point that was going wide, but Tulk was able to get a piece of it that somehow deflected past MacInnes to give the Hitmen a 2-0 lead early in the game.

CGY 0-3 at 13:14 — Matteo Danis (1), assisted by Tyson Galloway and David Adaszynski (PP) // On a zone entry by the Hitmen, Danis fired a laser short side top shelf for his first career WHL goal to extend the lead to 3-0.

CGY 0-4 at 15:10 — Zac Funk (1), assisted by Sean Tschigerl and Riley Fiddler-Schultz // On yet another odd-man rush, the Hitmen worked a tic-tac-toe play with Funk connecting to give the Hitmen a 4-0 lead.

REG 1-4 at 5:49 — Jaxsin Vaughn (1), assisted by Matteo Michels // On a great forecheck by the Pats’ younger guys, Vaughan picked up his own rebound and buried his first career WHL goal to get the Pats on the board on just their eight shot on goal, making the game 4-1.

REG 3-5 at 18:31 — Tye Spencer (3), unassisted // The Pats were battling deep in the Hitmen zone and Armstrong got control of the puck and sent it to the front of the net and Spencer fired home his third of the season to pull the Pats back to within a pair at 5-3.

CGY 3-6 at 20 seconds — Oliver Tulk (3), assisted Carter Yakimchuk and Tyson Galloway // Fresh off the rush, Tuck skated in on the right wing and lifted a shot past MacInnes to restore the Hitmen 3-goal lead at 6-3.

CGY 3-7 at 3:38 — Oliver Tulk (4), unassisted // The Pats turned the puck over in the neutral zone and Tulk made no mistake firing the puck past MacInnes’s outstretched glove to give the Hitmen a 7-3 lead.

Before returning to the comfy confines of the Brandt Centre, the Pats have one more road contest on Wednesday, October 5 when they travel to Brandon for a tilt against the Wheat Kings. The Pats’ next home contest is on Friday, October 7 at 7:00 PM when they host the Winnipeg ICE. You can purchase your tickets here.