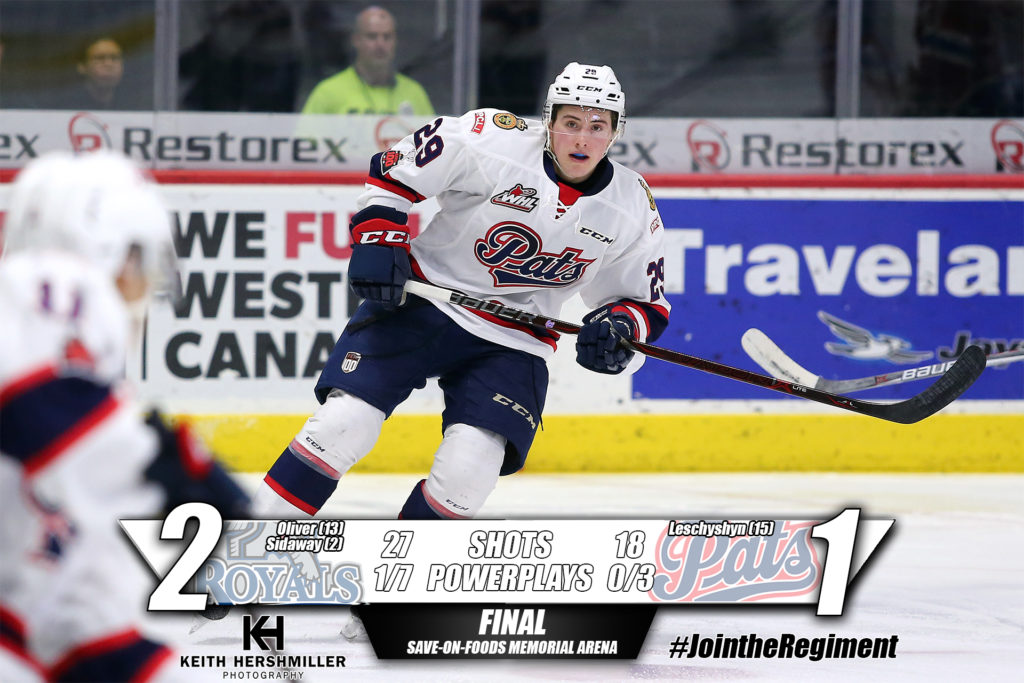 The Regina Pats gave up a game winning goal late in the third in a 2-1 defeat at the hands of the Victoria Royals on Saturday night.

The Pats opened the scoring at 12:57 of the first when Jake Leschyshyn tipped home his team leading 15th of the season. The Royals powerplay got the game tied at 17:19 of the first, thanks to Kaid Oliver and it was 1-1 after one. The two clubs put six shots on goal apiece in the second and the game remained tied at the break. In the third, it was 1-1 until late when Tanner Sidaway buried his second of the season into the top corner with 2:45 remaining and the Royals took the 2-1 lead. They held on from there for the two points.

The Pats were outshot 27-18, the powerplay was oh for three and the penalty kill was six for seven. Max Paddock was named the games second star making 25 saves on 27 shots.

Quick Hits
– Sebastian Streu has a goal and an assist in his first three games with the Pats.
– Jake Leschyshyn extended his point streak to 10 games with a goal, has 10 goals and eight assists in the streak.
– Austin Pratt has points in six straight, he has three goals and five assists in that stretch.

What’s Next?
The Pats continue their road swing on Tuesday in Kamloops against the Blazers at 9 p.m. Regina time on 620 CKRM. Next home game is Saturday, December 1 against the Prince Albert Raiders. Tickets are available at reginapats.com, the Brandt Centre Box Office and at any Regina Safeway, where Fun Zone tickets are $13 plus tax.