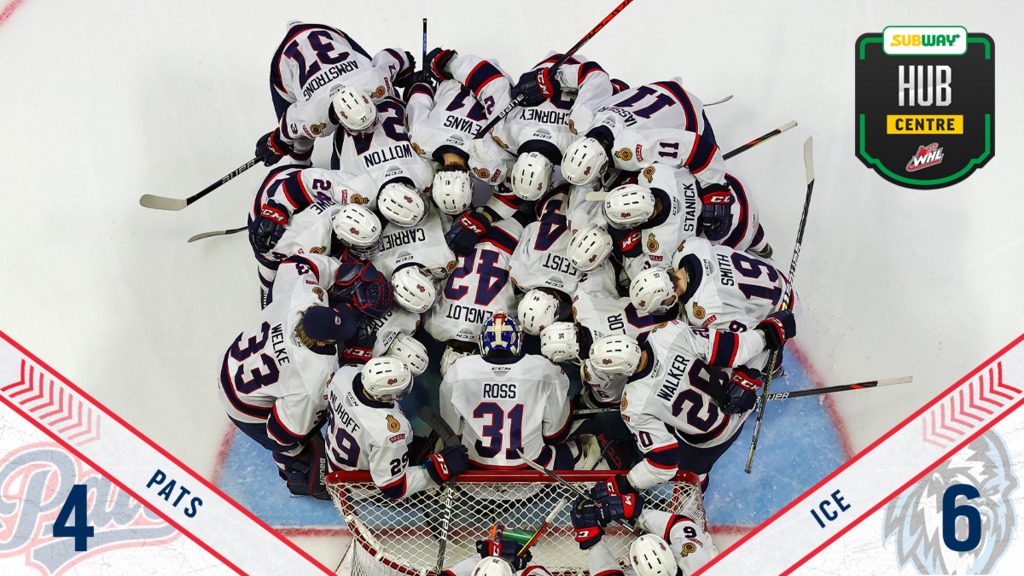 REGINA – After a sprint of a season, the Regina Pats 2020-21 campaign ended Tuesday night with a 6-4 loss to the Winnipeg ICE inside the Subway WHL Hub.

Regina fell behind 5-1 to the ICE at the Brandt Centre, before making it interesting late in the game, as Zack Smith netted his first career WHL hat trick.

“This game, it was really nice to see our players not quit being down by a big margin against a good team,” said Pats head coach Dave Struch, whose team trailed 4-1 heading into the third period.

“We’re just a young team that’s coming into our own and Winnipeg, they’ve had a lot of high draft picks over the course of time here and they’ve done well with those. They all work very hard and that’s why they’ve had so much success in this hub.”

A nice way to cap his stay inside the #SubwayWHLHub#JoinTheRegiment pic.twitter.com/XJJ1TD9fSC

Winnipeg, who finished the season with an 18-5-1-0 record, ran out to a three-goal lead early in the second before Smith scored his first of the night 15:55 into the middle frame. That goal, which came short-handed, was followed up by two more goals from the high-powered ICE.

Michael Milne and Zach Benson scored late in the second and early in the third respectively to extend the lead to 5-1, before a beautiful between the legs goal from Carter Massier made it 5-2.

Milne’s second of the night at 9:47 of the third capped the scoring for Winnipeg, before two late goals from Smith put the finishing touches on Regina’s season.

Despite the setback, the season collectively was a step in the right direction for the Pats, who end the year with a 9-12-2-1 record, and were part of a successful hub experience for all seven teams who have called the Queen City home since early March.

“The overall hockey side, we really liked what we saw. The COVID side, credit to every one of those guys in there for doing things the right way consistently to give each and every one of them an opportunity to continue playing hockey and (get) where we are today,” Struch pointed out.

For Logan Nijhoff, just getting the chance to play and come together as a group away from the rink will be his lasting memories of life inside the Hub.

“It was a one-of-a-kind experience, hopefully. We’re obviously very grateful we got this opportunity and it was a great opportunity for us to really come together as a team. We couldn’t be more thankful,” said Pats captain Logan Nijhoff.

With this season now in the books, the focus now shifts to the offseason and laying the foundation for the 2021-22 season, which is expected to open this fall.

“It’s exciting. Obviously we’re still very young, so we’re going to need a lot of guys to step up next year like we did in these last five games. Aside from tonight I thought we were a really good team. We kind of found our identity late there, being a hard-nosed team and we definitely need to play that to our advantage next year,” said Nijhoff.

“It’ll be fun and it’s extremely exciting. I’m looking forward to hopefully being a contender.”