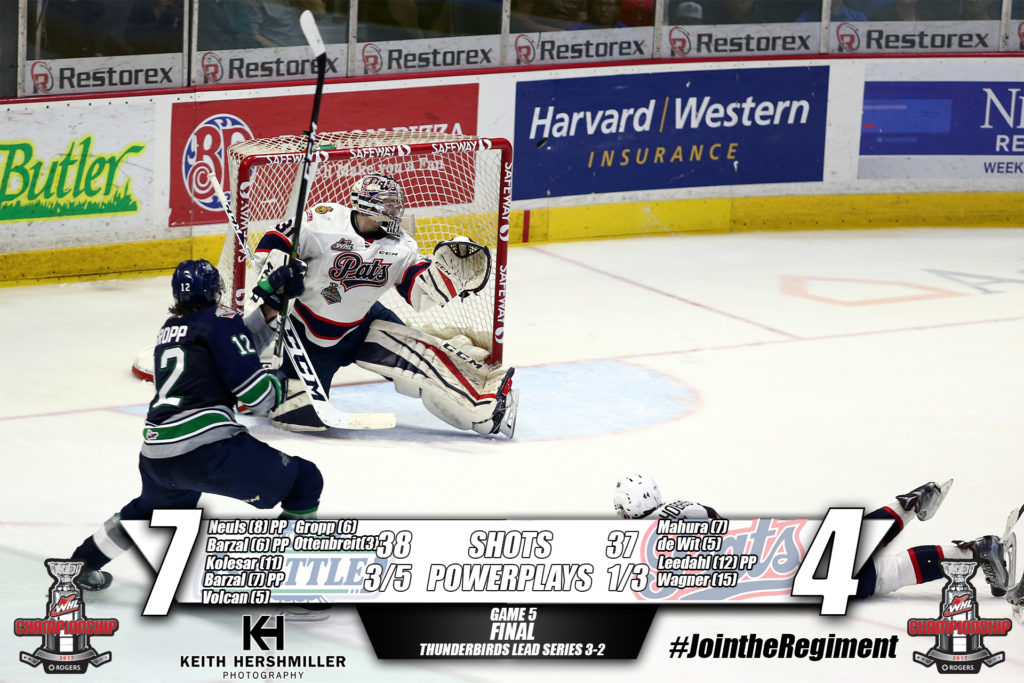 The Regina Pats fell 7-4 to the Seattle Thunderbirds in game five of the WHL Championship Series on Friday night and trail the best-of-seven series 3-2. The Pats got off to a good start and led 2-0 on goals from Josh Mahura and Jeff de Wit. The Thunderbirds powerplay responded with two quick ones and the game was tied 2-2 after one. In the second, Dawson Leedahl scored on the powerplay to give the Pats the lead back at 3-2 but Seattle would score four unanswered, two late in the second and two early in the third to lead 6-3. Austin Wagner got the Pats back within two at the midway point of the third but the Thunderbirds picked up an empty netter late to lead 7-4 and that was the final. Seattle outshot the Pats 38-37 in the win, Tyler Brown made 31 saves for Regina, Carl Stankowski 33 for the Thunderbirds. The Pats powerplay was one for three and the penalty kill was two for five. The Pats will host Seattle for game six of the WHL Championship Series, presented by Rogers, Sunday at 6 p.m. at the Brandt Centre.

What’s Next?
The Pats will host Seattle for game six of the WHL Championship Series, presented by Rogers, Sunday at 6 p.m. at the Brandt Centre.