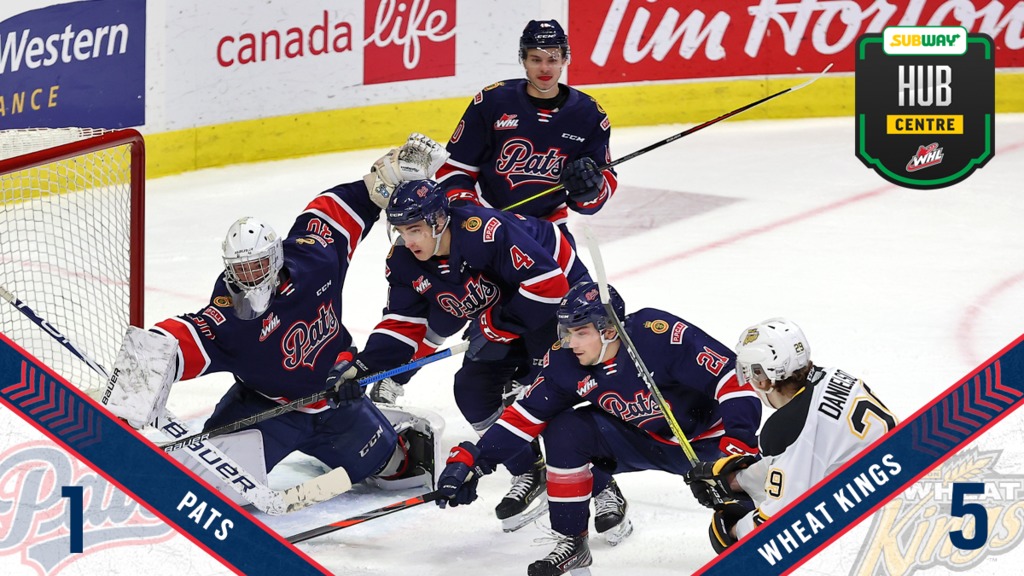 REGINA – Four power play goals from the WHL’s leading scorer Lynden McCallum in the span of 2:58 were the difference Sunday night, as the Regina Pats fell 5-1 to the Brandon Wheat Kings inside the Brandt Centre.

Tanner Howe scored the Pats lone goal, as the 15-year-old from Prince Albert earned his first in the WHL. Unfortunately for the Pats, Howe’s goal came on a night the Wheat Kings sealed the East Division crown, scoring all five goals on special teams, while Regina went 0-for-6 on the man advantage.

“Theirs were good, ours weren’t,” Pats head coach Dave Struch said bluntly of the special teams battle. “Our power play was really bad tonight, it was poor, the worst it’s been all year.”

“The special teams lost the game for us, there’s no question. We just finished talking about how good they’ve been (the last few games) and they cost us tonight. We had chances on our power play and we didn’t do what we were supposed to.”

“Guys went rogue on us on the power play and then our penalty kill wasn’t very good.”

Tanner Howe’s first in @TheWHL is a BEAUTY!

After falling behind 1-0 7:53 into the first period thanks to a Ridly Greig short-handed goal, the Pats answered back in the middle frame. Howe evened the score 3:47 into the second with a top shelf beauty on Brandon netminder Ethan Kruger.That goal, however, was the high-water mark for the Pats on the night.

Regina will wrap their stay inside the Subway WHL Hub Tuesday night against the Winnipeg ICE.

“Play like we’re playing for something,” Struch said when asked what the message is heading into Tuesday. “We’ve got to compete. We’ve got to play with some courage. We have to pay attention to details and habits, no matter who we play.”

“We have to come out and play hard, play with courage, and stay out of the box, and have fun doing it.”