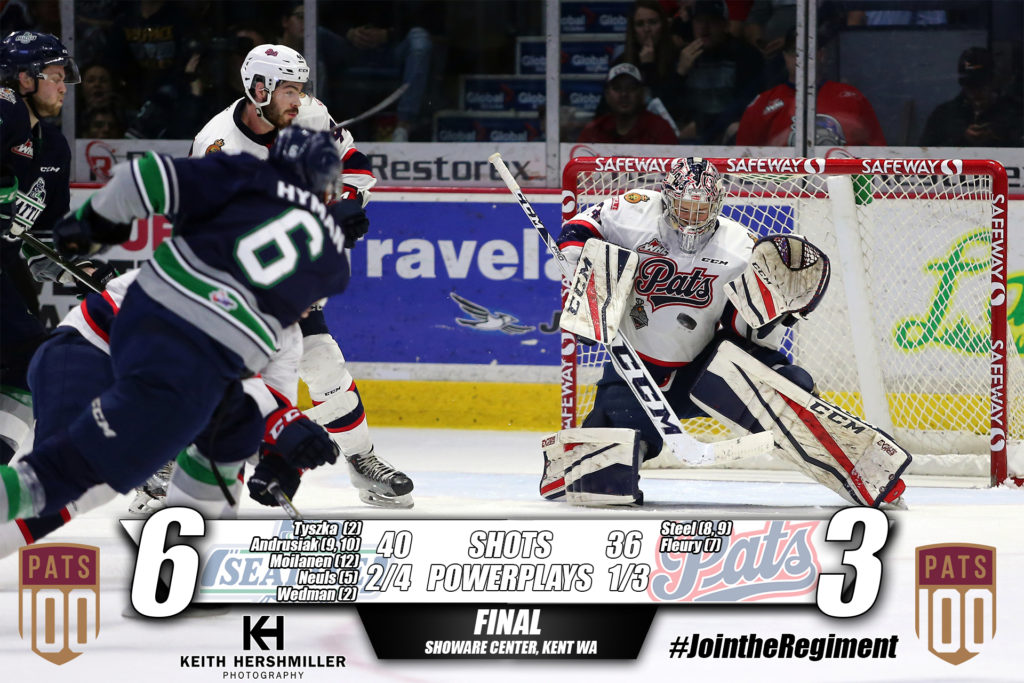 The Regina Pats fell 6-3 in Kent, Washington to the Seattle Thunderbirds on Wednesday night. Regina opened the scoring on a 5 on 3 powerplay when Sam Steel scored from the slot for his eighth of the season. Seattle got a tying goal four minutes later and it was 1-1 after 1. Zach Andrusiak would score twice in the second for Seattle, Cale Fleury one for Regina and it was 3-2 Thunderbirds heading to the third. 22 seconds in, Sam Steel scored on a wraparound for his second of the night and ninth of the season to tie the game 3-3. However the T-Birds got the eventual game winner with eight minutes left, added another on the powerplay and an empty netter in the final minutes to make it 6-3 and that was the final score. Seattle outshot the Pats 40-36, the Regina powerplay was one for three and the penalty kill two for four. Sam Steel, Cale Fleury and Josh Mahura led the team with two point nights while Tyler Brown made 34 saves. The Pats (13-10-2-0) are back in action on Friday against the Tri-City Americans. Puck drop is at 9 p.m. Regina time on 620 CKRM.

Quick Hits
– Cale Fleury scored his first goal with the Pats as a part of a two point evening.
– Sam Steel had two goals, extending his point streak to four games (4G, 2A).
– Josh Mahura has put up two assists in back to back games.

What’s Next?
The Pats are back in action on Friday against the Tri-City Americans. Puck drop is at 9 p.m. Regina time on 620 CKRM.  Next home game is Friday, December 8 against the Kelowna Rockets. Tickets are available at reginapats.com, the Brandt Centre Box office and at all Regina Safeway locations, Safeway Funzone tickets are just $13 plus tax.