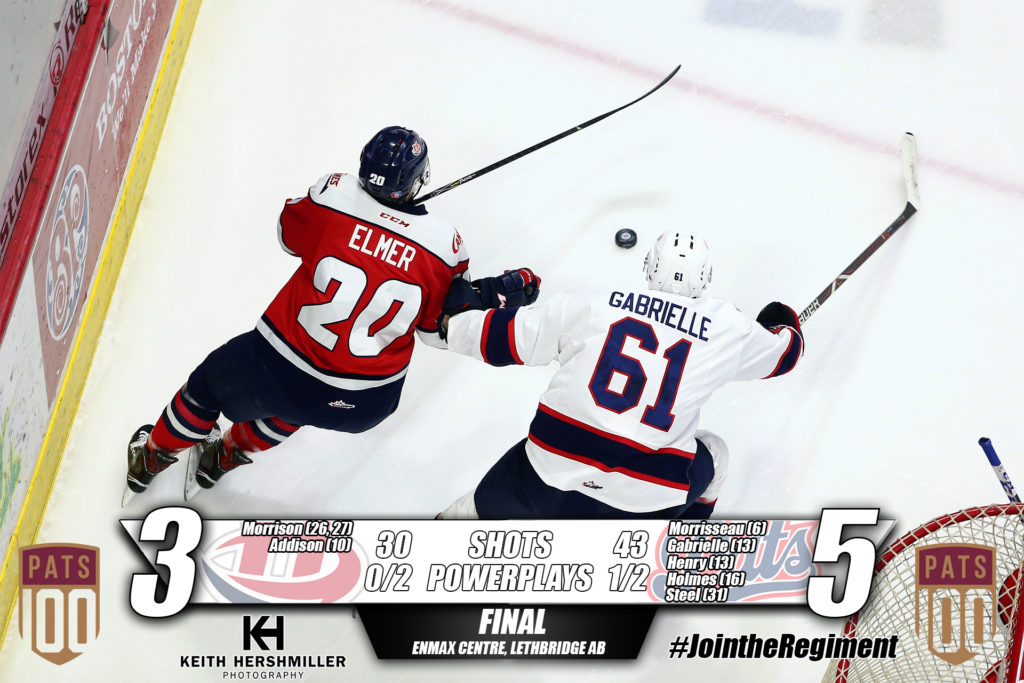 The Regina Pats won a fifth straight game on Saturday night, 5-3 in Lethbridge over the Hurricanes. The Pats got first period goals from Koby Morrisseau, his sixth and then Jesse Gabrielle scored his 13th and it was 2-0 after the opening period. In the second, Nick Henry extended the lead to 3-0 when he scored on a breakaway for his 13th. Robbie Holmes then made it 4-0 with his 16th but the Hurricanes got two back late in the period and it was 4-2 after two. In the third, The Hurricanes drew to within a goal, but Sam Steel would seal the victory with an empty netter for his 31st and 5-3 was the final score. Jesse Gabrielle led the offence with a goal and two assists while Max Paddock made 27 saves. Regina outshot Lethbridge 43-30, the powerplay was one for two and the penalty kill two for two. The Pats (38-25-5-1) return to home ice on Wednesday night against the Prince Albert Raiders at 7 p.m. at the Brandt Centre.

Quick Hits
– Sam Steel has tied Adam Brooks for 10th on the Pats all-time scoring list with 335 points.
– The Pats went 5-0-0-0 in five games on their Central Division road trip.
– Jesse Gabrielle tied his season high of three points in a game in the win.

What’s Next?
The Pats return to home ice on Wednesday night against the Prince Albert Raiders at 7 p.m. at the Brandt Centre. Tickets are available at reginapats.com, the Brandt Centre Box office and at any Regina Safeway where FunZone tickets are just $13 plus tax.