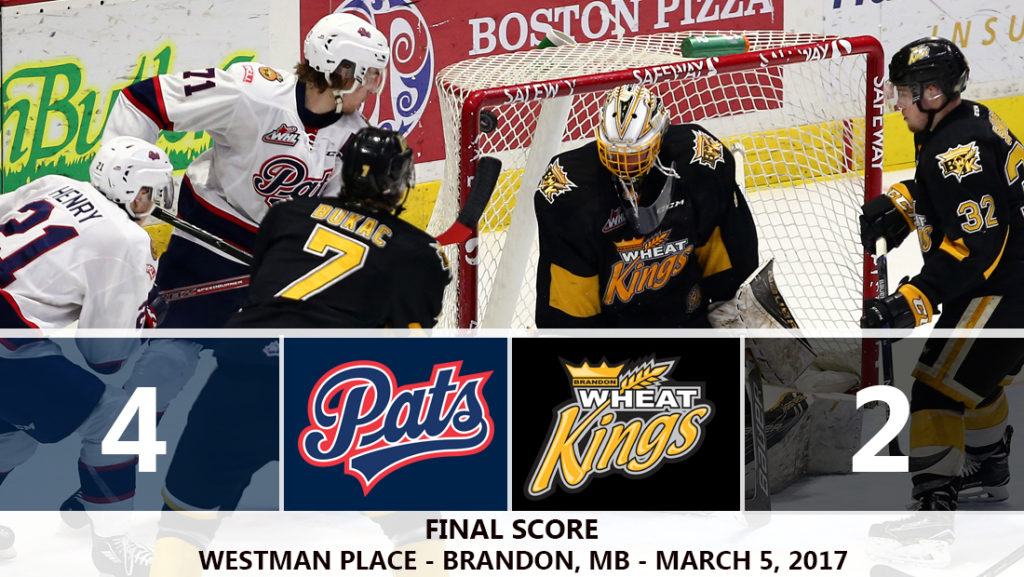 The Regina Pats snapped their four game winless streak on Sunday afternoon with a 4-2 victory in Brandon over the Wheat Kings. The Pats opened the scoring shorthanded in the first thanks to Adam Brooks and led 1-0 after 20 minutes. Connor Hobbs scored in the second for the Pats, his 28th but Brandon got two and it was a 2-2 game heading to the final period. Sam Steel gave the Pats the lead for good, 2:24 into the third, with his 46th and Wyatt Sloboshan added an empty netter to give the Pats the two points. Regina outshot Brandon 54-38, Tyler Brown made 36 stops for the Pats, Logan Thompson 50 for the Wheat Kings. The Regina powerplay was oh for five and the penalty kill was four for five with a shorthanded goal. The Pats (45-12-7-1) return to action on Wednesday in Swift Current against the Broncos. Puck drop is at 7 p.m. on 620 CKRM.

Quick Hits
–  The Pats snapped a four game losing streak in Brandon with the win.
– The Pats scored their league leading 20th shorthanded goal.
– Regina is now 4-1-0-1 against the Wheat Kings this season.

What’s Next?
The Pats return to action on Wednesday in Swift Current against the Broncos. Puck drop is at 7 p.m. on 620 CKRM. Next home game is Friday, March 10, against Moose Jaw. Tickets are available at reginapats.com or at the Brandt Centre Box Office.