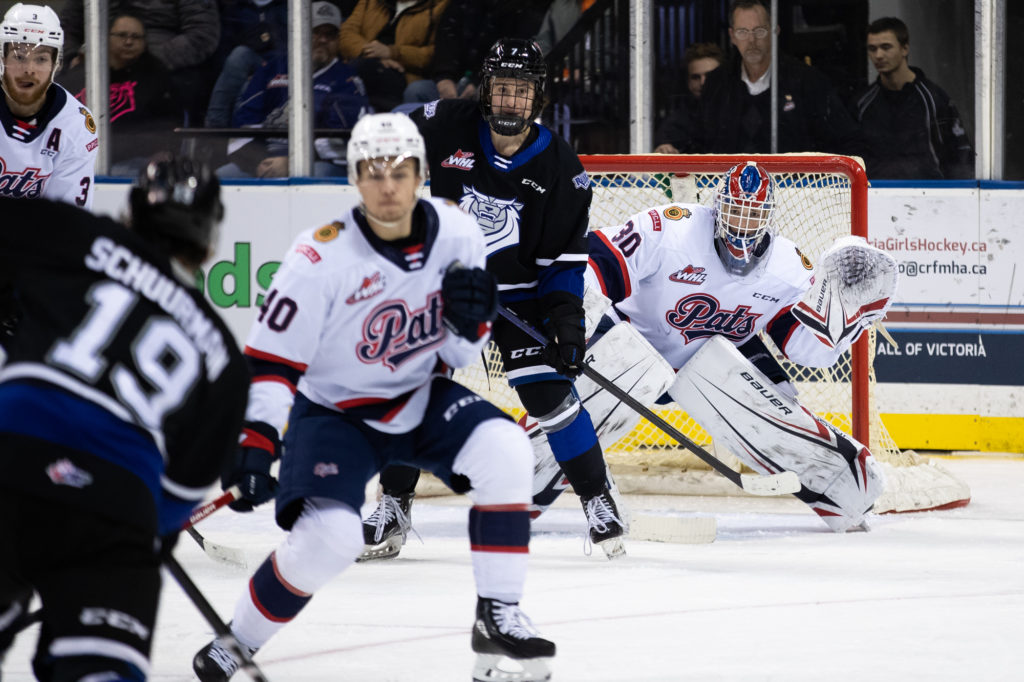 Victoria, B.C. — The Regina Pats took a 7-2 lead midway through the game over the hometown Victoria Royals. The Royals made a game of it late in the second period, but the Pats carried a 7-5 lead into the final frame. The Queen City Kids sealed the game with a pair of late goals to pick up the 9-5 win over at the Save-On-Foods Memorial Arena in their second stop on their British Columbia trip.

Tanner Howe had four goals and two assists to lead the way for the Pats in the victory. Not to be outdone, Connor Bedard scored a hat-trick and added an assist while Stanislav Svozil recorded four points, with a goal and three helpers. Matthew Kieper stopped 16 of 21 in the opening 40 minutes and Drew Sim stopped all seven shots he faced in 20 minutes of relief.

Brayden Schuurman scored twice, while Kalem Parker, Marcus Almquist, and Jake Poole replied for the Royals. Logan Cunningham was called upon to make 19 saves on 27 Pats shots in the loss.

We swear this is a new post, but it's Howie again!

REG 1-0 at 4:08 — Tanner Howe (12), assisted by Borya Valis and Stanislav Svozil // Svozil entered the Royals zone with speed and dished a pass to Valis who centered the puck to Howe who buried the puck past Logan Cunningham to give the Pats a 1-0 lead early in the contest.

VIC 1-1 at 10:13 — Brayden Schuurman (2), assisted by Alex Thacker and Jason Spizawka // Schuurman got the puck in the neutral zone and entered the Pats zone with speed along the left wing, skated toward the circle and let a wrist shot go that beat Matthew Kieper to his glove side to tie the contest up at 1-1.

VIC 1-2 at 14:51 — Kalem Parker (2), assisted by Alex Thacker and Jake Poole (PP) // Parker’s long-range point shot somehow eludes a screened Kieper to give the Royals their first lead of the game at 2-1.

REG 2-2 at 15:48 — Tanner Howe (13), assisted by Stanislav Svozil and Tanner Brown // Svozil once again entered the Royals zone down the right wing and from down low he centered a pass to Howe who was undetected in front as he sent a quick one-timer past Cunningham to tie the game at 2-2.

REG 3-2 at 17:19 — Tanner Howe (14), assisted by Stanislav Svozil (PP) // Svozil sped into the Royals zone, and ripped the puck at Cunningham who deflected it right to Howe, who fired it past Cunningham to complete the hat-trick and give the Pats a 3-2 lead.

REG 4-2 at 19:22 — Connor Bedard (20), assisted by Tanner Howe and Luke Bateman // Bedard was sent in alone, did a familiar backhand then forehand deke, and sent it past Cunningham to give the Pats a two-goal lead at 4-2 entering the first intermission.

REG 5-2 at 54 seconds — Connor Bedard (21), assisted by Tanner Howe // Howe caused a turnover, cut across in front of the Royals netminder, and dropped it to Bedard who buried his second of the game to extend the Pats lead to 5-2.

REG 6-2 at 1:50 — Stanislav Svozil (4), assisted by Luke Bateman // Svozil carried in on another rush, fired the puck at Cunningham who had trouble with it where it bounced off bodies and into the net to give the Pats a 6-2 lead.

REG 7-2 at 10:23 — Connor Bedard (22), assisted by Layton Feist (SH) // Bedard got behind the Royals’ defence, grabbed the loose puck and went in alone, tucking the puck five-hole past Cunningham to complete the hat-trick and give the Pats a 7-2 lead.

VIC 7-3 at 11:17 — Brayden Schuurman (3), assisted by Alex Thacker and Jake Poole (PP) // Schuurman ripped a wrister past Kieper on the powerplay to get the Royals back to within four at 7-3.

VIC 7-4 at 13:54 — Marcus Almquist (3), assisted by Matthew Hodson and Reggie Newman (PP) // Almquist was zooming around the Pats zone and cut across from the left wing to the right wing, and fired a shot past Kieper to get the Royals back to within three at 7-4.

REG 8-5 at 16:50 — Tanner Howe (15), assisted by Connor Bedard // After some confusion and a lengthy review, Howe’s long-distance shot beat Cunningham top shelf to give the Pats their second three-goal lead at 8-5.

The Pats continue their British Columbia trip with a pair of weekday games. On Tuesday, November 29 they face off with the Kelowna Rockets at Prospera Place, puck drop is at 9:05 PM Saskatchewan time. The next night, Wednesday, November 30 the Queen City Kids travel to Kamloops to face the Memorial Cup host Blazers at the Sandman Centre with a 9:00 PM puck drop.