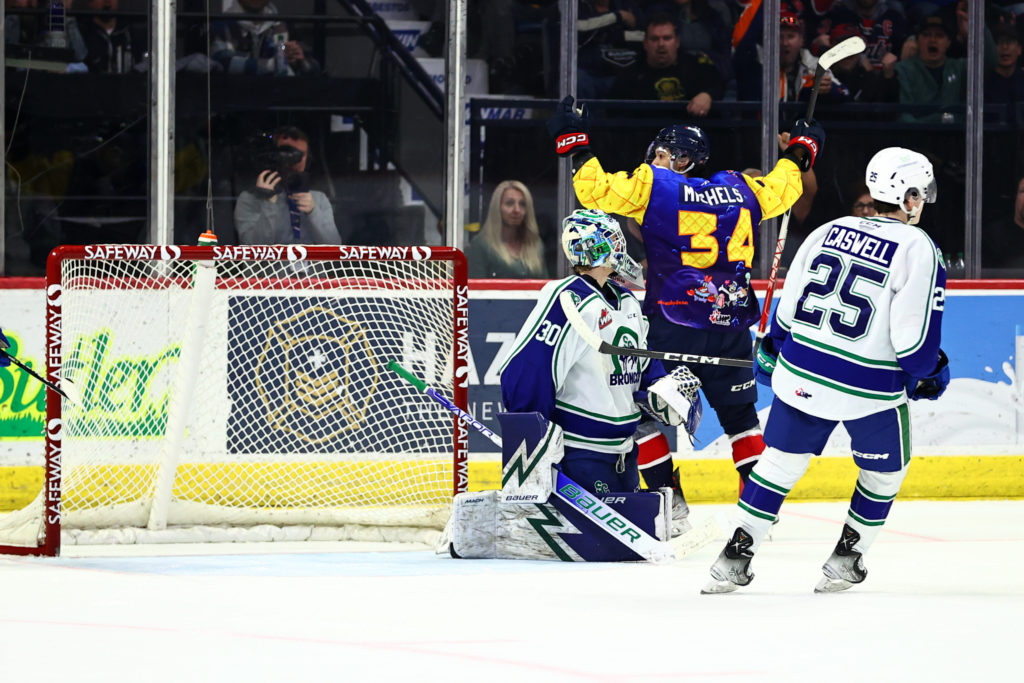 Regina, Sask. — The Regina Pats extended their home winning streak to four straight games following a 5-2 victory over the Swift Current Broncos in front of a sold-out crowd (6,499) on Saturday inside the Brandt Centre.

Connor Bedard scored twice, while the Pats got singles from Tanner Howe, Alexander Suzdalev, and Matteo Michels who scored his first career WHL goal. Stanislav Svozil recorded three assists and Drew Sim made 23 saves for his 18th win of the season.

For the Broncos, they got goals from Clarke Caswell and Connor Gabriel. Reid Dyck got the start in net, allowing five goals on 30 shots in the loss.

REG 1-0 at 1:15 — Tanner Howe (23), assisted by Alexander Suzdalev and Stanislav Svozil // The Pats entered the Broncos zone with speed and after multiple passes, Howe got the puck in the slot and buried it past Dyck to give the Pats a 1-0 lead.

SC 1-1 at 6:06 — Clarke Caswell (7), assisted by Josh Filmon and Mathew Ward // A Broncos forward won the battle for the puck and sent it to Caswell at the top of the right circle, his wrist shot beat Sim blocker side to tie the game at 1-1.

REG 2-1 at 16:13 — Alexander Suzdalev (24), assisted by Stanislav Svozil and Borya Valis (5-on-3) // Valis’ one-timer went wide of the net and Suzdalev got the puck and sent it to the point for Svozil who returned the puck to Suzdalev and he one-timed it past Dyck to give the Pats the 2-1 lead.

REG 3-1 at 2:12 — Connor Bedard (38), assisted by Stanislav Svozil // Svozil chipped the puck up to Bedard, who got behind the Broncos’ defence and he went in alone and as he was being harassed by the trailing defender, he ripped a low snap shot past Dyck’s glove hand to extend the pats lead to 3-1.

REG 4-1 at 7:04 — Connor Bedard (39), assisted by Alexander Suzdalev // Suzdalev stole the puck from a Broncos player and sent a pass to Bedard who got in close on a two-on-one and fired home his second of the game to give the Pats a 4-1 lead.

SC 4-2 at 13:58 — Connor Gabriel (1), assisted by Luke Mistelbacher // The Broncos broke into the Pats’ zone with speed and Gabriel got to the left circle and fired a low shot past Sim for his first-ever WHL goal to get the Broncos back to within a pair at 4-2.

If you believe in yourself, with a tiny pinch of magic all your dreams can come true!

REG 5-2 at 16:26 — Matteo Michels (1), assisted by Brayden Barnett // Barnett chipped the puck past the defence to himself along the left boards and found Michels streaking in and he put home a wrister past Dyck’s glove hand for his first career marker giving the Pats a 5-2 lead late in the contest.

The Pats’ next contest is in eight days when they meet the Medicine Hat Tigers for their first meeting of the season on Sunday, January 29th, with a 4:00 p.m. puck-drop at the Brandt Centre. You can purchase your tickets for the game here.