RECAP: Lockner and Morrisseau lead Pats to victory in Calgary 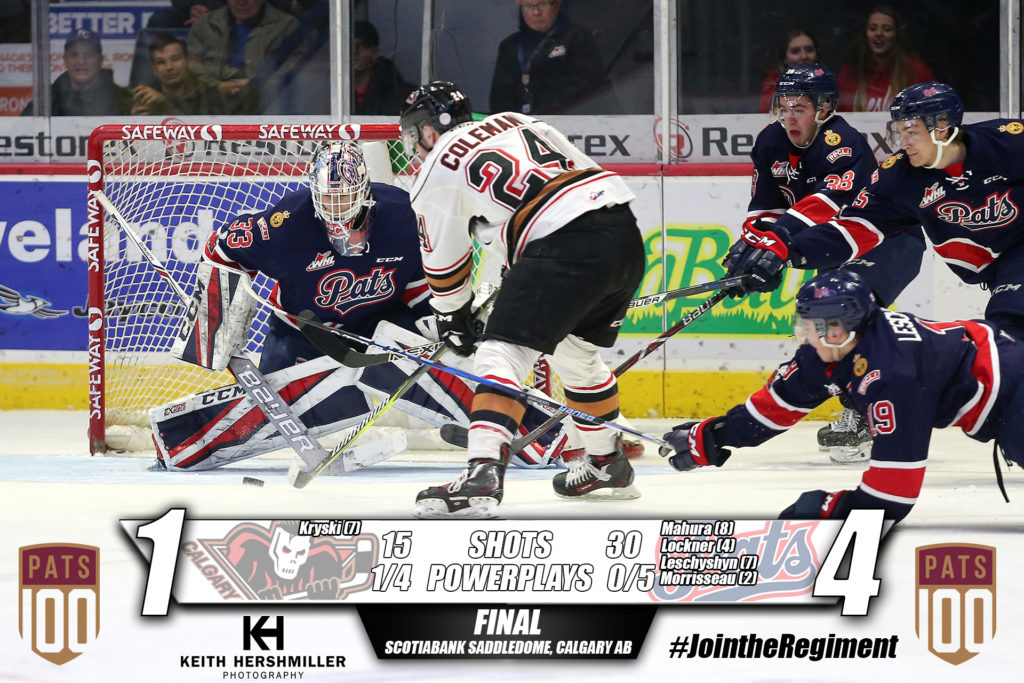 Koby Morrisseau and Bryan Lockner each had three point nights to lead the Regina Pats to a 4-1 win in Calgary over the Hitmen on Sunday night. Regina got the game’s first goal, 3:11 in when Josh Mahura scored on a slap shot from the blue line for his eighth of the year. The Calgary powerplay would tie it later in the period and it was 1-1 after one. In the second, Bryan Lockner put home his fourth on a pretty passing play with Koby Morrisseau to give the Pats the 2-1 lead. Then, just as a powerplay expired Jake Leschyshyn scored his seventh off a rebound and the Pats took a 3-1 lead to the third. In the final frame, Koby Morrisseau rounded out the scoring with his second of the season and 4-1 was the final from Calgary. Regina outshot the Hitmen 30-18, the powerplay was oh for five, the penalty kill three for four and Max Paddock made 18 saves for his fifth win of the year. The Pats (15-12-2-0) wrap up their stretch of eight straight on the road on Wednesday in Brandon against the Wheat Kings. Puck drops at 7 on 620 CKRM.

Quick Hits
– Koby Morrisseau set a career high with a three point night.
– Bryan Lockner also had his best game of his WHL career with a goal and two assists.
– Max Paddock improved to 2-0-0-0 against the Calgary Hitmen.

What’s Next?
The Pats wrap up their stretch of eight straight on the road on Wednesday in Brandon against the Wheat Kings. Puck drops at 7 on 620 CKRM.  Next home game is Friday, December 8 against the Kelowna Rockets on Teddy Bear Toss Night at the Brandt Centre. Tickets are available at reginapats.com, the Brandt Centre Box office and at all Regina Safeway locations, Safeway Funzone tickets are just $13 plus tax.