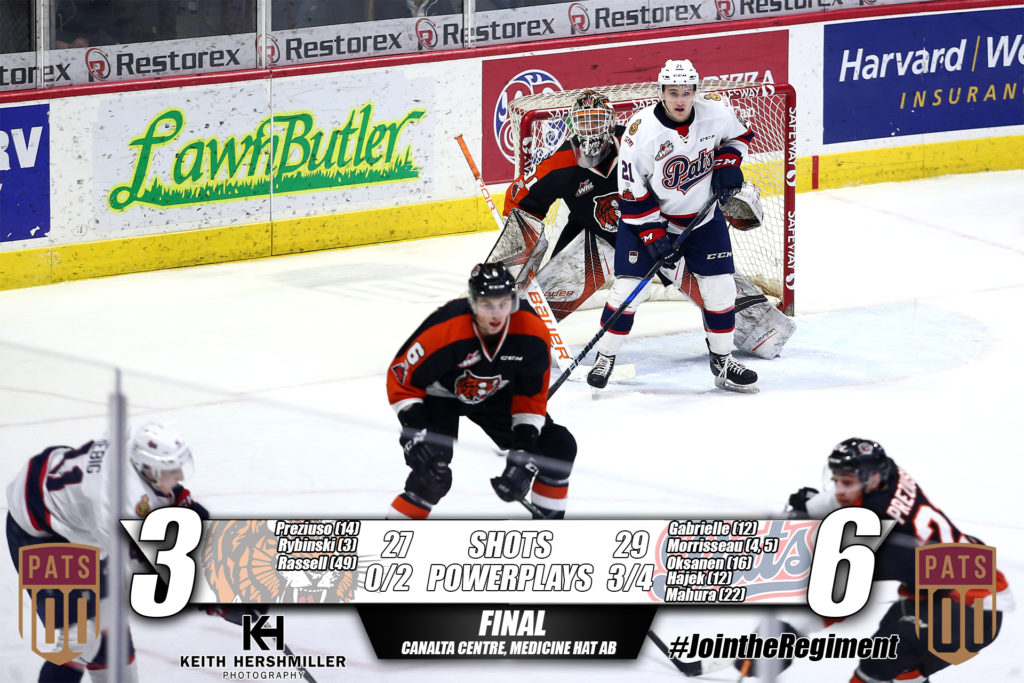 The Regina Pats scored three times in the final five minutes to pick up a third straight win, 6-3 in Medicine Hat on Tuesday night. The Pats opened the scoring early when Jesse Gabrielle ripped a one timer short side for his 12th. The Tigers responded with goals 56 seconds apart to lead 2-1 but, Koby Morrisseau drew the Pats even at two late in the first with his fourth of the season. In the second, Emil Oksanen scored on the powerplay for his 16th to give the Pats a 3-2 lead but, once again the Tigers tied it up and it was 3-3 going to the third. In the final frame, The Pats scored three times in the final five minutes to earn the two points. First, Libor Hajek picked up his 12th on a point shot on the powerplay, then Koby Morrisseau potted his second of the night, fifth of the season to make it 5-3 and finally Josh Mahura hammered in his 22nd, a powerplay goal and 6-3 was the final score. Morrisseau led the offence with two goals and an assist while Jesse Gabrielle, Emil Oksanen, Josh Mahura and Libor Hajek each had two points. Regina outshot Medicine Hat 29-27, the powerplay was three for four, the penalty kill two for two and Max Paddock made 24 saves. The Pats (36-25-5-1) continue their road trip Friday in Kootenay against the ICE. Puck drops at 8 p.m. Regina time on 620 CKRM.

Quick Hits
– The Pats have won seven of their last eight games.
– Sam Steel extended his point streak to nine games, has seven goals and nine assists in that stretch.
– Koby Morrisseau scored twice in a game for the first time in his WHL career.

What’s Next?
The Pats continue their road trip Friday in Kootenay against the ICE. Puck drops at 8 p.m. Regina time on 620 CKRM. Next home game is Wednesday, March 14 against Prince Albert at 7 p.m. at the Brandt Centre. Tickets are available at reginapats.com, the Brandt Centre Box office and at any Regina Safeway where FunZone tickets are just $13 plus tax.