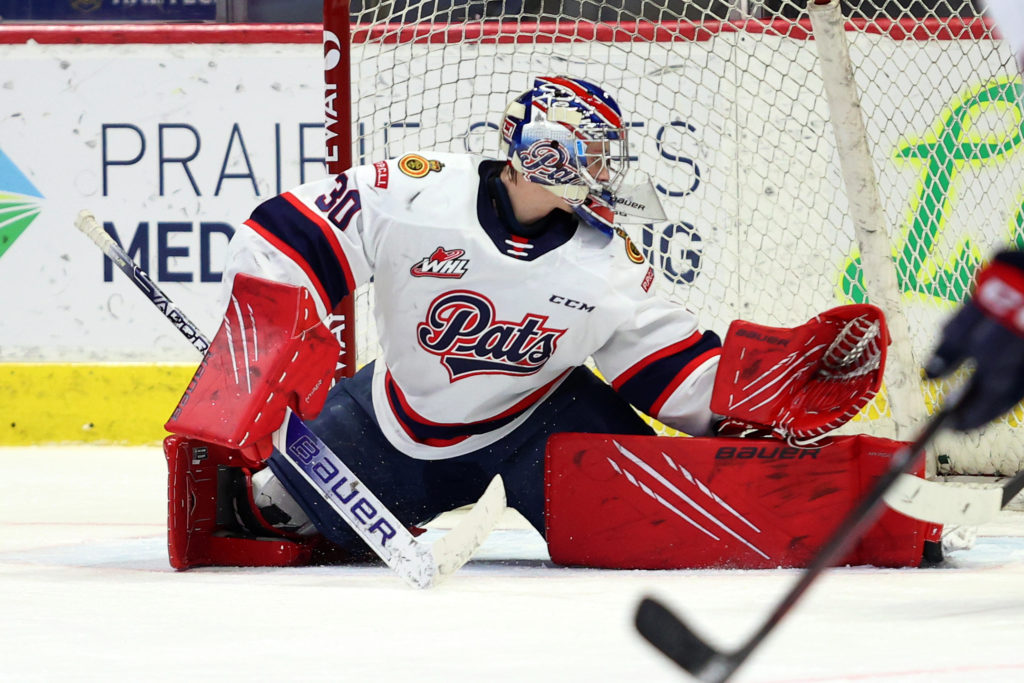 Brandon, Man. — In one of the best goaltending performances in recent memory for the club, Matthew Kieper made 51 saves as the Regina Pats skated to a 3-1 win over the hometown Brandon Wheat Kings at Westoba Place.

After trailing early in the game, the Pats scored three unanswered goals with Alexander Suzdalev leading the way with a pair of markers. Tanner Howe added a single for the Pats in the win.

Matthew Kieper is KIEP-ING us in front 😏

We're still up 2-1 late in the 3rd. pic.twitter.com/w2QBtCQxxK

BDN 0-1 at 5:09 — Ben Thornton (1), assisted by Logen Hammett and Nate Danielson // A point shot was shot wide of the Pats net bounced off the back boards, and caromed to the opposite side of Matthew Kieper where Thornton had a wide open cage and buried it to make it 1-0 Brandon.

REG 1-1 at 17:45 — Alexander Suzdalev (2), assisted by Connor Bedard (PP) // With the Pats on the powerplay, they carried control of the puck in the Brandon zone, and with the Wheat Kings forcing the play, the Pats managed to keep it in the zone. The puck ended up on Bedard’s stick who feathered a beautiful sauce pass cross ice to Suzdalev who one-timed it home to tie the game at 1-1.

REG 2-1 at 45 seconds — Tanner Howe (3), assisted by Connor Bedard and Borya Valis // The Pats forced a turnover in the Wheat Kings zone to the left of Bjarnason where Valis sent a pass across the crease to Bedard who got the puck to Howe where he ripped home his third of the season to give the Pats a 2-1 lead.

REG 3-1 at 14:15 — Alexander Suzdalev (3), assisted by Matteo Michels and Parker Berge // With Michels leading the rush down the right wing, Michels fired a low shot that Bjarnason kicked out to Suzdalev who  fired home his second of the game to give the Pats a 3-1 lead.

The Pats’ next home action is Friday, October 7, when they host the Winnipeg ICE. The Pats then face the Swift Current Broncos on Saturday, October 8 in the second of three-straight home contests. The Queen City Kids will then wrap up the homestand on Wednesday, October 12 against the Prince Albert Raiders. All three contests are 7:00 PM puck-drops and you can purchase your tickets here.