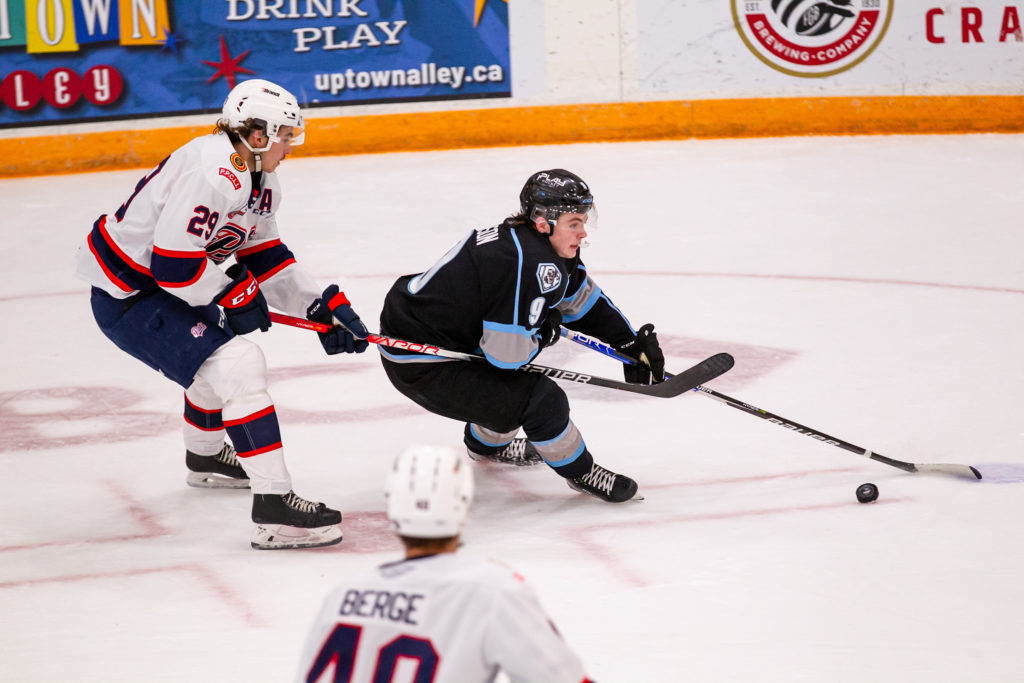 Winnipeg, Man. — Despite opening the scoring on Saturday night, the Regina Pats fell 5-2 to the hometown Winnipeg ICE at Wayne Fleming Arena. A four-goal second period by the ICE was all they would need in winning their 15th consecutive contest, improving their record to 20-1-0-0 this season.

Alexander Suzdalev scored twice for the Pats, who lost their third game in a row. Drew Sim made 28 saves on 32 shots in the loss, dropping his record this season to 6-5-1.

Zach Benson scored twice and added a pair of assists to lead Winnipeg in the win. Connor McClennon, Conor Geekie and Ty Nash (empty-netter) rounded out the scoring for the victors. Mason Beaupit, who was making his second straight start in goal for the ICE, made 28 saves on 30 shots.

Suzdalev's 11th of the season opens the scoring early in the 2nd period!#ItsGoTime | #REGvsWPG pic.twitter.com/iyTxmVlkSB

REG 1-0 at 2:11 — Alexander Suzdalev (11), assisted by Stanislav Svozil and Connor Bedard // Bedard entered the offensive zone on the left side, put on the brakes and quickly sent a cross-ice pass to Svozil, who then fired a long pass down to the left corner to Suzdalev. Suzdalev then banked the biscuit off the goaltender’s pad and into the net to give the Pats a 1-0 lead.

WPG 1-1 at 2:51 — Connor McClennon (16), assisted by Matthew Savoie and Owen Pederson // Just 40 seconds after the Pats opened the scoring, the ICE were able to work it down low to McClennon, who ripped a one-timer past Drew Sim to tie the contest 1-1.

WPG 1-2 at 6:17 — Zach Benson (12), assisted by Carson Lambos (SH) // Benson hopped on the loose puck while shorthanded to create an odd-man rush and shovelled home a backhander for his league-leading fourth shorthanded goal to give the ICE their first lead of the contest at 2-1.

WPG 1-3 at 10:09 — Zach Benson (13), assisted by Graham Sward and Connor McCelnnon (PP) // With the Pats killing off a five minute power play, Sim was able to stop an initial shot from Graham Sward, but Benson dove to the loose puck to poke it past Sim and extend the home side’s lead to 3-1.

WPG 1-4 at 19:17 — Conor Geekie (12), assisted by Zach Benson and Carson Lambos // With time running down in the second period, the ICE struck on an odd-man rush, with Benson dishing backdoor to Geekie, who made no mistake.

Suzzy gets us back in it, plus were headed back to the PP again!

REG 2-4 at 5:15 — Alexander Suzdalev (12), assisted by Connor Bedard and Stanislav Svozil (PP) // After Sim made a great stop on a shorthanded rush, the Pats took the puck the other way, led by Svozil, who was hauled down. On the delayed call, the puck came to Bedard at the top of the left circle, who fed a backhand pass across to Suzdalev, who ripped home a shot to get the Pats to within two at 4-2.

WPG 2-5 at 18:40 — Ty Nash (8), assisted by Zach Benson and Ben Zloty (EN) // With the Pats playing with an extra skater, they had trouble getting anything going and Nash sealed the deal with the empty-netter to make it 5-2.

“I thought the turning point in the game was when we were up 1-0 and we did something that we never should have done off the face-off and it ended up in our net. It was hard to recover when you do something like that and you let them smell blood.” – Pats HC/GM John Paddock on the game overall

“I think Alex is making really good strides. I think Washington is pleased with him also. There’s lots of strides to keep making, but he brings an element to the game that you have to have and he’s doing a good job.” – Paddock on Alexander Suzdalev, who scored a pair of goals on Saturday

The Pats’ next contest is Friday, November 25 when they start their West Coast trip with a visit to the Langley Events Centre to take on the Vancouver Giants. Puck drop for that contest is set for 9:30 p.m. Saskatchewan time.