RECAP: ICE score five times in the third to beat the Pats 9-5 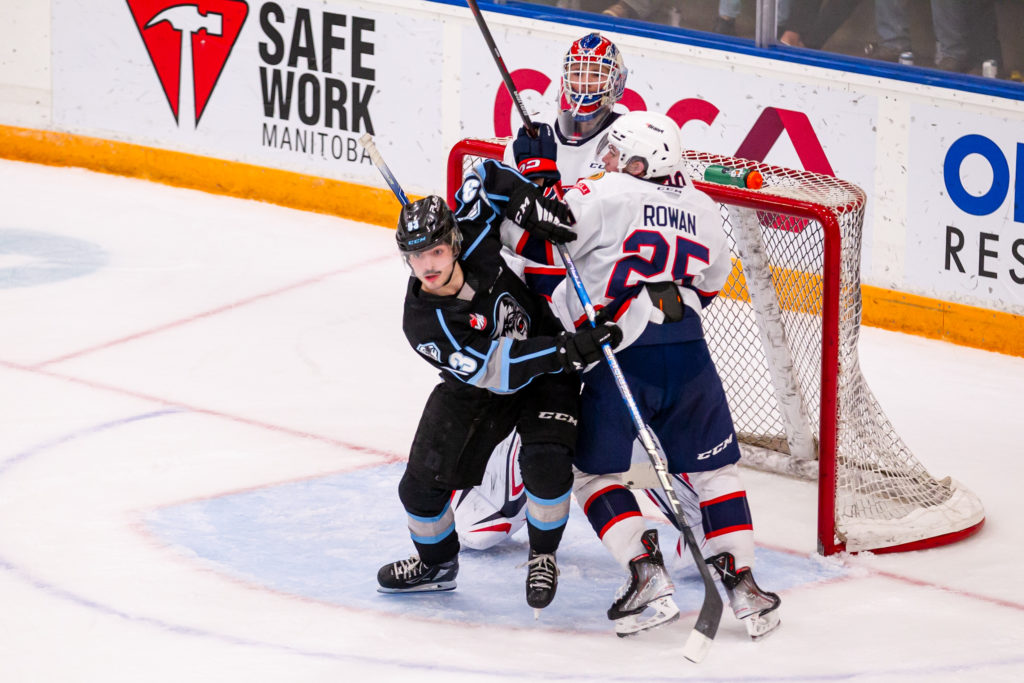 Winnipeg, Man. — The Regina Pats were tied with the Winnipeg ICE 4-4 through forty minutes, but Matthew Savoie and the ICE were just too strong as they scored five times in the third period in a 9-5 win over the visiting Pats at the Wayne Fleming Arena.

The aforementioned Savoie led the charge for the ICE with the hat-trick and a trio of assists for a six-point game. Owen Pederson scored twice, while Connor McClennon, Zach Benson, Connor Dale, and Ty Nash rounded out the scoring for the ICE. Mason Beaupit made 21 saves on 26 shots in his ICE debut.  The ICE extended their winning streak to 14 games and moved to 19-1-0-0 on the season.

Connor Bedard, Tanner Howe, Braxton Whitehead, Stanislav Svozil, and Layton Feist replied for the Pats in the loss. Matthew Kieper stopped 32 of 41 shots in the loss.

Connor Bedard dangles around Prosofsky & tucks it past Beaupit just 10 seconds into the game for yet another highlight reel goal!#CB98 | #NHLDraft pic.twitter.com/YADPAquiNz

REG 1-0 at 10 seconds — Connor Bedard (19), unassisted // Right off the opening face-off, Bedard intercepted a pass from the ICE defender, dangled around Karter Prosofsky and went backhand-forehand, and neatly tucked the puck by Mason Beaupit to give the Pats an early 1-0 lead.

WPG 1-1 at 5:29 — Connor McClennon (15), assisted by Matthew Savoie and Owen Pederson (PP) // With the ICE on the powerplay, the puck gots through bodies to McClennon who one-timed it past Matthew Kieper to tie the contest up at 1-1.

Bedard feeds Howie and we retake the lead with his 10th of the season!

REG 2-1 at 16:39 — Tanner Howe (10), assisted by Connor Bedard and Alexander Suzdalev // Bedard deked into traffic in the ICE zone and sent a pass to Howe who put a shot on Beaupit that squeaked through the five-hole to give the Pats a 2-1 lead late in the opening frame.

WPG 2-2 at 53 seconds — Owen Pederson (11), assisted by Connor McClennon and Matthew Savoie (PP) // The ICE worked the puck deep in the Pats zone on the powerplay where McClennon sent a quick pass to the front of the net to Pederson who chipped the puck over Kieper to tie the contest up at 2-2.

WPG 2-3 at 4:05 — Matthew Savoie (7), assisted by Connor McClennon and Carson Lambos // With the Pats needing a line change, the forwards changed but the defence got caught on a long shift, and the speedy ICE took advantage. The ICE skated in on a three-on-two where Savoie converted a tic-tac-toe play to give the ICE their first lead of the game at 3-2.

Great effort from the line of Brook, Rowan & Whitehead ties this game!

REG 3-3 at 13:30 — Braxton Whitehead (2), assisted by Zane Rowan and Jakob Brook // The Pats grind the puck down low in the ICE zone and work it around where it eventually got to Whitehead who put a shot on Beaupit that snuck by the ICE netminder to tie the game up at 3-3.

WPG 3-4 at 14:13 — Owen Pederson (12), assisted by Ben Zloty and Matthew Savoie // The ICE’s Pederson directed the puck toward the Pats net and the puck deflected in off of a defender and past Kieper to restore Winnipeg’s one-goal lead at 4-3.

REG 4-4 at 16:05 — Stanislav Svozil (3), assisted by Alexander Suzdalev and Connor Bedard (PP) // Svozil was able to walk in from the point and fired a slapshot past Beaupit to get the Pats back on even terms at 4-4 with the powerplay marker.

WPG 4-5 at 2:58 — Matthew Savoie (8), assisted by Zach Benson // Just as a Pats powerplay came to an end, the ICE ended up on a three-on-one where Savoie was originally stopped but was able to grab his own rebound and tucked it over Kieper’s pad to give the ICE yet another one-goal lead at 5-4.

WPG 4-6 at 7:40 — Matthew Savoie (9), assisted by Owen Pederson and Connor McClennon (PP) // The ICE scored yet another powerplay goal as Savoie completed the hat-trick to give the hometown club a two-goal lead at 6-4.

WPG 4-7 at 7:59 — Zach Benson (11), assisted by Graham Sward and Owen Harmacy // Sward threw the puck toward the Pats net and Benson tipped the puck past Kieper to extend the ICE lead to three at 7-4 just 19 seconds after taking a two-goal lead.

WPG 4-8 at 9:08 — Connor Dale (3), assisted by Aidan Oiring // The ICE won a battle deep for the puck in which Oiring sent a pass from behind the Pats goal out front to Dale who chipped it past Kieper to make it 8-4.

REG 5-8 at 15:43 — Layton Feist (3), assisted by Braxton Whitehead and Easton Armstrong (PP) // Feist’s long-distance point shot got through Beaupit to cut the ICE lead to three goals at 8-5.

WPG 5-9 at 17:58 — Ty Nash (7), assisted by Zach Benson and Conor Geekie // The ICE stole the puck, skated behind the Pats net, and centered the puck to Nash who fired home a goal to give the ICE a 9-5 lead late in the contest.

The Pats’ next contest is on Saturday, November 19th at 8:05 again when they will face the ICE in the second of two straight in Winnipeg.