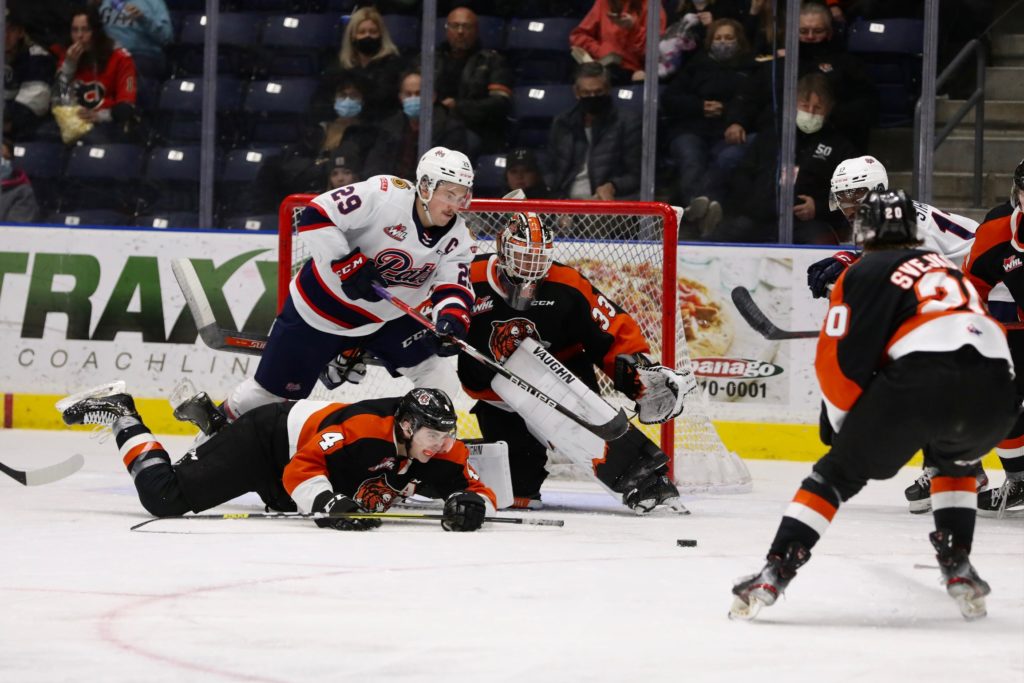 Medicine Hat, Alta. — The Regina Pats topped the Medicine Hat Tigers by a 6-2 score on Tuesday night to kick off a four-game road swing through Alberta.

Cole Carrier had quite the night, scoring a natural hat-trick late in the third period in a span of just 3:40. All three goals also came at different strengths: first on the power play, second at even-strength and finally shorthanded into the empty-net. Logan Nijhoff, Connor Bedard and Drew Englot (game-winning-goal) also scored in the win. Ryker Evans had a three-assist evening in his 150th career regular season game.

The Pats next game is on Wednesday, Nov. 24 against the Lethbridge Hurricanes at 8 p.m. Saskatchewan time.

MH 1-0 at 3:09 – Lukas Svejkovsky (9), assisted by Dru Krebs and Noah Danielson // Krebs point shot took a couple different deflections before bouncing to Svejkovsky at the side of the goal, who backhanded it in.

REG 1-1 at 3:53 – Logan Nijhoff (6), assisted by Tom Cadieux (5) // The Tigers turned over the puck right to Cadieux at the right point, who quickly fired a wrist shot to the net. Nijhoff just got a touch on it and it squeezed through Bjorklund to tie the game.

REG 2-1 at 2:47 – Connor Bedard (9), assisted by Ryker Evans (14) and Borya Valis (6) // Evans got the puck just outside the offensive blue after a good heads up play from Valis, and flipped a puck into the zone towards the middle for Bedard, who knocked it down out of the air and fired a shot that went off Bjorklund and in.

REG 3-1 at 6:55 – Drew Englot (3), assisted by Stanislav Svozil (10) // At the tail-end of a Pats power play, Svozil entered the offensive zone right up the middle and drew all the attention of the Tigers defenders, allowing Englot to swoop in and finish off in tight.

MH 2-3 at 13:21 – Ashton Ferster (5), assisted by Rhett Parsons // Parsons fed the puck to Ferster, who one-timed it past Kieper to make things interesting with just under seven minutes remaining.

REG 4-2 at 15:05 – Cole Carrier (6), assisted by Borya Valis (7) and Stanislav Svozil (10) (PPG) // The Pats quickly got set up on the man advantage up top with Svozil, who went to his right to Valis, who then fed it down low to Carrier on the goal line. Carrier quickly pivoted towards the middle and whipped a shot far side past the blocker of Bjorklund.

REG 5-2 at 16:23 – Cole Carrier (7), assisted by Drew Englot (7) and Ryker Evans (15) // Evans went back to the defensive zone for the puck and connected with Carrier on an outlet pass, who quickly one-touched it to Englot. After a Tigers defenceman stepped up on Englot in the neutral zone, the puck ricocheted off him and into Medicine Hat’s zone, which Carrier got to first, before sniping a shot for his second of the game.

REG 6-2 at 18:45 – Cole Carrier (8), assisted by Zack Stringer (4) and Ryker Evans (16) (SHG, ENG) // Stringer lifted the puck out of the zone and all the way down the ice, which Carrier hunted down and deposited into the empty net to complete the hat-trick.

3:40 — Carrier’s natural hat-trick in such a short span is definitely the biggest stat from Tuesday’s contest.

Some call him Bedsy. Some call him Dards. No matter what you wanna call him, this is the kind of stuff he is gonna do. @WHLPats | @CBCSports pic.twitter.com/eC4bqCwwEs

The Pats continue their four-game swing through Alberta on Wednesday against the Lethbridge Hurricanes. This weekend they are in Red Deer (Saturday) and Calgary (Sunday). Their next home game is Sat. Dec. 4 against the Swift Current Broncos. Regina will be wearing special jerseys, which were designed by Pats fan Allery Lang, who won the Real Canadian Superstore #LeaveYourMark Design a Jersey Contest. For tickets, click here.