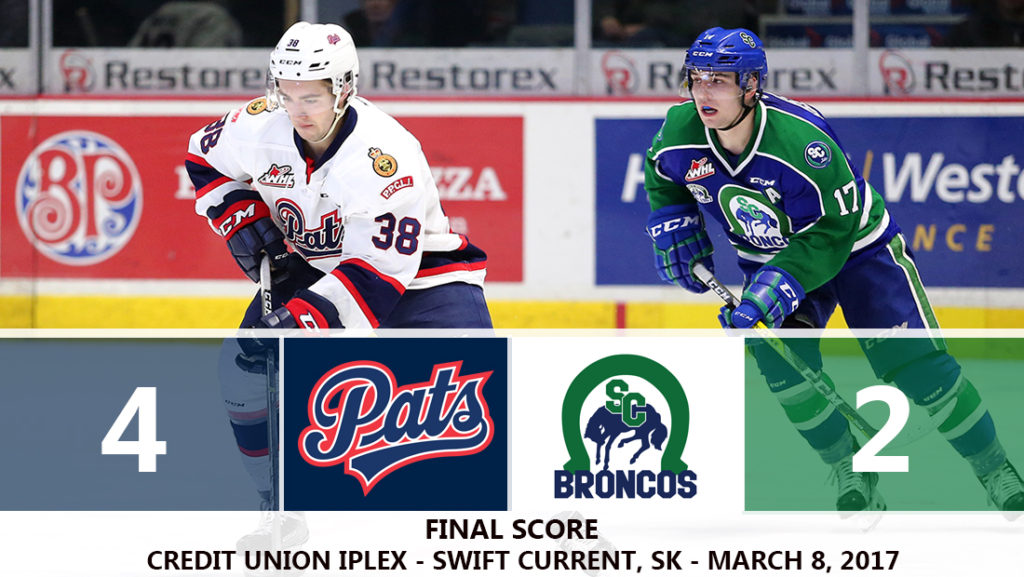 The Regina Pats reached 100 points in the standings on Wednesday night with a 4-2 win in Swift Current over the Broncos. The two clubs were tied 1-1 after the first but in the second, Dawson Leedahl and Riley Krane scored to give Regina the two goal lead heading to the final period. The Broncos got one back on the powerplay with just over three minutes left to make it 3-2. However Wyatt Sloboshan would score into an empty net with 32 seconds left to give the Pats the victory. Adam Brooks led the offence with three assists. The Broncos outshot the Pats 37-33 in the loss, Tyler Brown made 35 saves in the Regina goal, Taz Burman 29 for the Broncos. The Pats powerplay was oh for two while the penalty kill went four for five. The Pats (46-12-7-1) are back in action on Friday night against the Moose Jaw Warriors. Puck drop at the Brandt Centre is at 7 p.m.

Quick Hits
– Riley Krane scored his first career WHL goal in the win.
– The Pats eclipsed the 100 point mark for the season.
– Adam Brooks had three assists, has three goals and seven assists in a four game point streak.