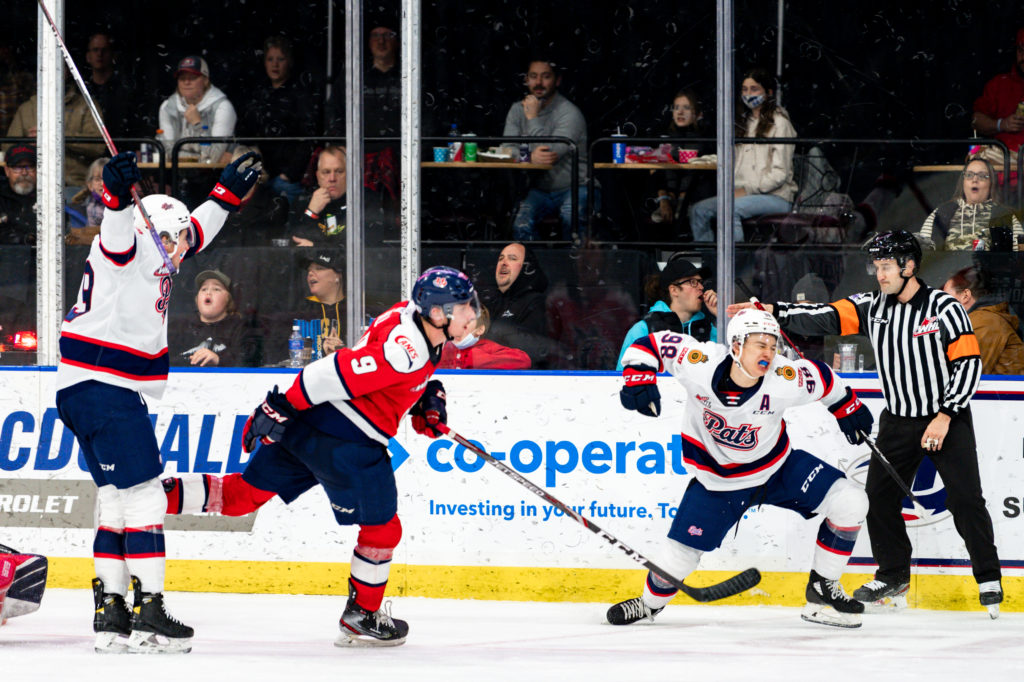 Lethbridge, Alta. — The Regina Pats got an exciting last-second goal from Connor Bedard on Wednesday night in a 3-2 overtime win over the Lethbridge Hurricanes at the Enmax Centre.

Bedard’s goal came on a 3-on-1 rush in the extra frame while on the power play, as Cole Dubinsky fed him a cross-crease pass for a tap-in with 1.1 seconds remaining. It was Bedard’s 10th goal of the season and first on the power play.

The Pats would not have gotten the two points if it weren’t for goaltender Matthew Kieper, who was the best player on either side, finishing the night with 40 saves on 42 shots. He has now won three consecutive starts with a .946 SV% in that span and is 9-8 on the season.

Newly signed forward Alex Geci also played a big part in the win, scoring his first two WHL goals in the opening period, first on a shot from the slot, and then on a deflection.

The Pats next game is on Saturday, November 27 against the Red Deer Rebels at 8 p.m. Saskatchewan time.

REG 1-0 at 1:11 – Alex Geci (1), assisted by Adam McNutt (3) // McNutt pinched up the right wall and centred a pass for Geci, who quickly fired a wrist shot blocker side for his first WHL goal.

LET 1-2 at 12:49 – Noah Boyko (6), assisted by Kade Nolan and Jett Jones // Boyko was able to find the loose puck in the slot area after some confusion and lifted it over Kieper to cut the Pats lead in half.

LET 2-2 at 1:11 – Logan Wormald (4), assisted by Noah Boyko and Logan McCutcheon // After Englot blocked  a point shot, the puck bounced to Wormald at the top of the left circle, who ripped a shot off the cross-bar and in to tie the game.

REG 3-2 at 4:59 – Connor Bedard (10), assisted by Cole Dubinsky (6) (PPG) // 3-on-3 overtime had plenty of action both ways, and the Pats found themselves with a 3-on-1 rush opportunity in the dying seconds, where Dubinsky fed a cross-crease pass to Bedard for the tap-in.

Regina: Matthew Kieper was lights out for the second time in three games, making 40 saves on 42 shots, including 28 in the first two periods. He was named the game’s first star.
Lethbridge: Bryan Thomson was strong on Wednesday too, stopping 32 of 35.

1.1 — Bedard’s overtime winner was a dagger for the Hurricanes, scored with just a second remaining in the contest.

We have no words.

Matthew Kieper already had one Save of the Year Candidate, how bout another?

Matthew Kieper made a second bid for save of the year, with a couple of unbelievable stops in the third period, first using his athleticism to slide across and make a pad save, and then having the poise to stay with the play and reach back with his glove just in time.

The Pats play the back-half of their four-game swing through Alberta on Wednesday on Saturday in Red Deer and Sunday afternoon in Calgary. Their next home game is Sat. Dec. 4 against the Swift Current Broncos. Regina will be wearing special jerseys, which were designed by Pats fan Allery Lang, who won the Real Canadian Superstore #LeaveYourMark Design a Jersey Contest. For tickets, click here.