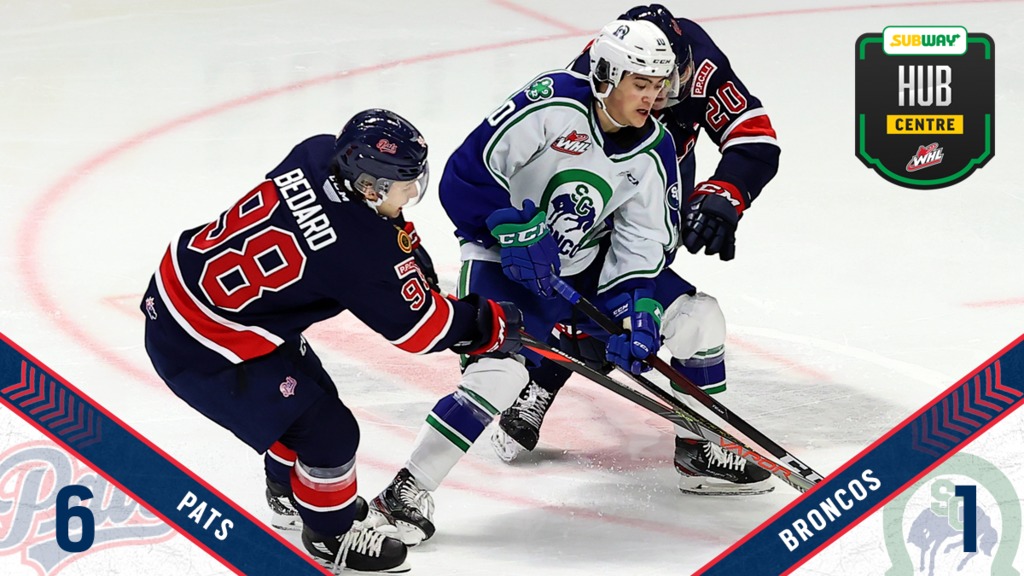 REGINA – A night after being held off the scoresheet for the first time in his WHL career, Connor Bedard made up for lost time in a 6-1 win for the Regina Pats Tuesday night over the Swift Current Broncos inside the Subway WHL Hub.

The exceptional rookie, who entered the night two points back of the WHL scoring lead behind Edmonton’s Dylan Guenther, registered two goals and two assists to fire up a new scoring streak and retake top spot on the WHL scoring list.

“It’s definitely going to be a big hit. Seeing what he’s done in these 14 games is pretty remarkable,” said Pats captain Logan Nijhoff when asked what it’ll be like to lose Bedard after Friday’s game.

“We’re going to have to battle with it next year I’m sure too when he goes off for U18s, or even World Juniors which I’m sure he’ll get the chance to go for. It’ll be fun to get to see what the younger guys kind of have in a bigger role, but we’re definitely going to miss him in the locker room and around the team environment.”

Nijhoff also had a big night Tuesday, registering a goal and an assist in the Pats’ third win in as many outings this season against the Broncos.

Along with Bedard and Nijhoff, Carson Denomie, Cole Dubinsky, and Zack Smith all scored for the Regiment. Denomie’s marker, which opened the scoring at 10:38 of the first, was his WHL-leading 12th of the season. On defence, Ryker Evans posted a pair of assists, as he moved into second in WHL d-man scoring with 15 points.

In goal Roddy Ross picked up his third win of the season, stopping 20 of the 21 shots he faced, with rookie Matthew Ward’s goal late in the first the lone puck to get past the Regina netminder.

The Pats will have a full off day Wednesday, before returning to the ice for practice on Thursday. Bedard’s final game with the club this season before leaving to join Canada at the IIHF U18 World Championship comes Friday, April 9 against the Brandon Wheat Kings at 4 p.m.