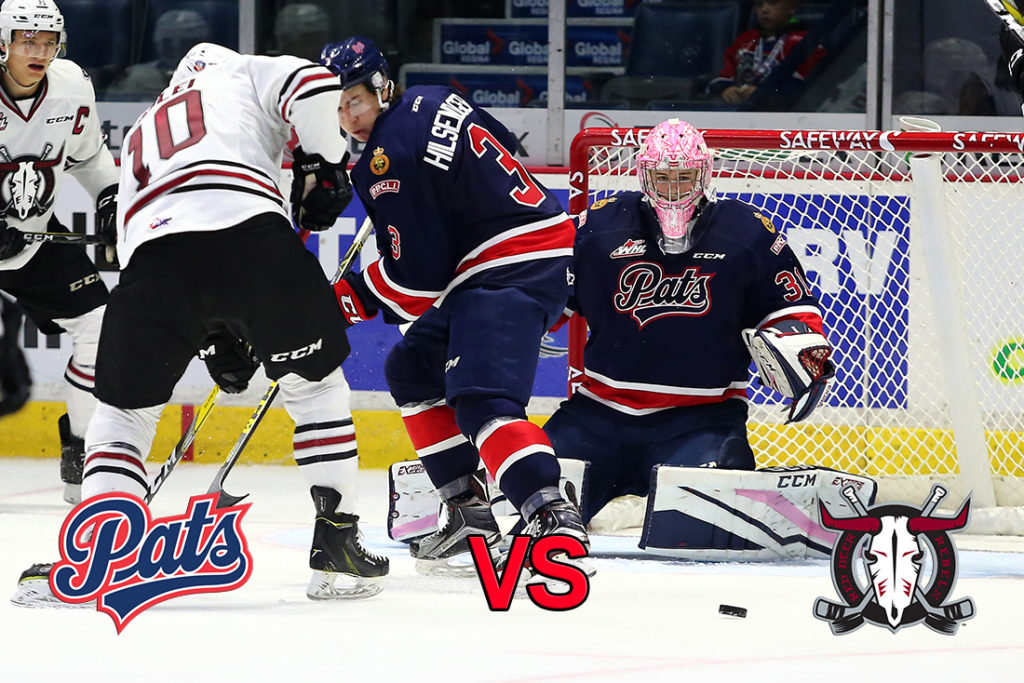 The Regina Pats (13-0-3-0) are in search of a 10th consecutive win on Sunday when they host the Red Deer Rebels (10-8-1-1). Puck drop is at 4 p.m. at the Brandt Centre. The Pats were last in action on Thursday night in Moose Jaw and beat the Warriors 5-4 in overtime. The Rebels were in Moose Jaw last night and won in overtime 8-7. Red Deer is playing their third game in as many nights this weekend. The Pats are 1-0-0-0 against Red Deer so far this year, winning 7-2 at home on October 2nd. Tonight’s game can be heard on 620 CKRM Two, via www.620ckrm.com with Bennett Dunlop Ford Pats Hockey beginning at 3:35 p.m.

Lead Up: Pats Down Warriors for 9th Straight Win
The Regina Pats powerplay scored four times in Moose Jaw Thursday night to lead them to a ninth straight victory, 5-4 in overtime over the Warriors. Sam Steel scored the winner in the extra frame on the man advantage, his 15th of the year. Filip Ahl scored his first career hattrick for the Pats and Adam Brooks has three assists while Connor Hobbs also chipped in with a two point evening. Tyler Brown made 23 saves to improve to 8-0-2-0 on the season. The Pats outshot the Warriors 51-27 in the contest.

Record Pace
The Pats have picked up 29 of 32 possible points through 16 games in 2016/17. With 56 games remaining on the schedule, the Pats are on pace for a 130 point season. That would eclipse the WHL record which was set in 1978-79 by the Brandon Wheat Kings when they had 125 points in the standings. The Pats hold an 8-0-3-0 record at home and are a perfect 5-0-0-0 on the road to this point on the year. The clubs is averaging 5.75 goals for per game and have yet to be outshot this season.

Streaking
Nine members of the Pats are riding point streaks of three games or more entering Sunday afternoon. Chase Harrison is on an 11 game streak (2G, 13A). Next is Adam Brooks at 10 games (6G, 16A). Sergey Zborovskiy has points in seven straight (7A) and Jake Leschyshyn has a six game point streak going (4G, 5A). Sam Steel is at five games (6G, 5A), Dawson Leedahl five games (4G, 5A) and Connor Hobbs has his streak to four games (2G, 9A). Filip Ahl is on a three game point streak (7G, 1A) as is Nick Henry (2G, 3A). Harrison’s 11 games and Adam Brooks 10 are the longest streaks in the WHL so far this year.

Ahl The Goals
Ottawa Senators prospect Filip Ahl is on a goal scoring tear. The 19-year-old has scored seven times in his last three games and is leading all WHL rookies with 14 goals on the season. Of those 14, seven have come on the powerplay which is tied for third most in the league. Ahl was a first round pick by the Pats in the 2016 CHL Import Draft and in 16 games, he has 22 points, which is good for a tie for first in rookie scoring. Ahl, Leschyshyn and Brooks are tied for second in team scoring with those 22 points. Sam Steel leads the way with 30 points on the young season.