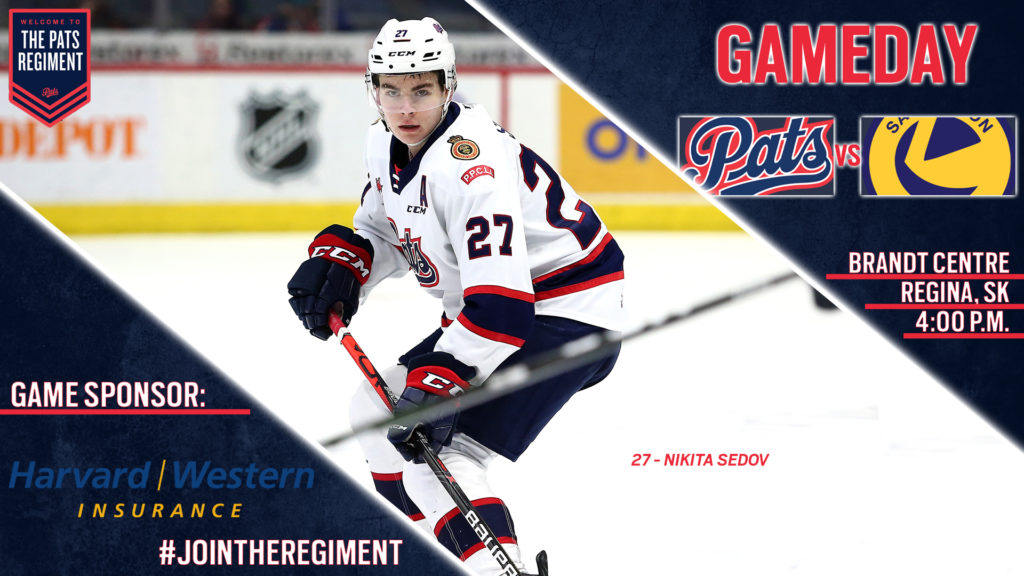 The Regina Pats (13-26-3-2) are on home ice Sunday for their first meeting of the 2019-20 season with the Saskatoon Blades (23-19-1-2). Puck drop is at 4:00 p.m. at the Brandt Centre. The Pats last game was on Friday when they fell 7-2 on home ice. The Blades hosted the Edmonton Oil Kings on Saturday and dropped a 3-2 decision. Tonight is the first of six meetings between Regina and Saskatoon, the Pats went 1-4-1-0 in their season series last year. The game can be heard with Bennett Dunlop Ford Pats Hockey starting at 3:35 p.m. on 620 CKRM.

Quick Facts
– The Pats are 3-4-2-1 in their last 10 meetings with Saskatoon, the Blades have won five straight against Regina.
– The Pats are 4-2-0-2 in their last eight home games.
– Austin Pratt leads the Pats with seven points in 17 career games against Saskatoon.
– Donovan Buskey is 3-0-0-0 against Saskatoon in his career, allowing seven goals in those three starts.
– 16-year-old’s Parker Berge and Easton Armstrong made their WHL debuts on Friday against Lethbridge.
– Zach Wytinck is riding a four-game point streak with a goal and three assists in that stretch.

Streaking
Pats defenceman Zach Wytinck carries a four-game point streak into Sunday afternoon against Saskatoon. The 20-year-old has put up a goal and three assists in that span. In 14 games since the Christmas break, Wytinck has been kept off the scoresheet just four times, putting up three goals and 11 assists in the other 10 games. He enters Sunday, seventh among all WHL defencemen with 36 points, while his 30 assists are tied for fourth. He is just seven points shy of his previous career high for a season when he had 43 points last year in 65 games with Brandon.

New Year
Since the calendar turned over to 2020, Pats forward Carson Denomie has put up some consistent offensive numbers. In 11 games in January, the 19-year-old has scored six goals and added six assists for 12 points in that stretch. Those 12 points lead the Pats, two ahead of Robbie Holmes and Zach Wytinck who have 10 points in January. The Regina product has put up 23 points in 27 games with the Pats since being acquired from Moose Jaw. For the season, he has 36 points in 46 games, which is second on the team, three points back of captain Austin Pratt. Denomie also leads Regina with nine powerplay goals and 19 powerplay points.

Last Pats Game
The Regina Pats returned to home ice Friday night and dropped a 7-2 decision to the Lethbridge Hurricanes. In the first, the Hurricanes got two goals from Dylan Cozens and another from Oliver Okuliar to lead 3-0 after 20 minutes of play. In the second, Lethbridge scored 45 seconds in and added another at 6:24 to lead 5-0. The Pats got one back nine seconds after that, Zach Wytinck his sixth to cut the lead to 5-1 and that was the score after two periods. In the third, the Hurricanes added two more to lead 7-1. The Pats got one back from Robbie Holmes, his 17th to make it 7-2 and that was the final score. The Pats were outshot 29-22, the powerplay went oh for two, the penalty kill three for four, While Danton Belluk and Donovan Buskey combined to make 22 saves.

Last Pats Game Vs Saskatoon
March 1, 2019 – Dawson Davidson put up two assists, while Saskatoon got goals from four different players in a 4-0 home win over Regina. The Blades outshot the Pats 35-19 in the victory. Dean McNabb stopped 31 of 35 in goal for the Pats, Nolan Maier made 19 saves for a shutout for Saskatoon.