PREVIEW: Pats wrap up first half of season in Moose Jaw Saturday 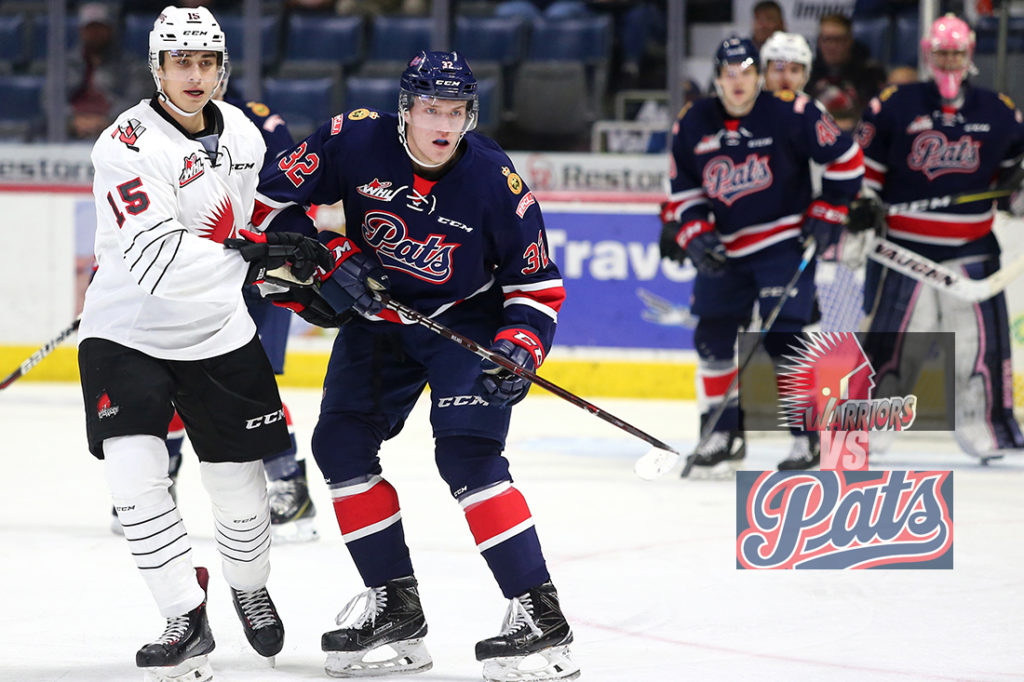 The Regina Pats (9-23-0-1) wrap up thee first half of the 2018-19 season on the road Saturday night against the Moose Jaw Warriors (16-8-4-1). Puck drop is at 7:00 p.m. at Mosaic Place. The Pats are coming off a 2-1 win at home to the Warriors on Friday night. Tonight is the fourth of eight meetings between Regina and Moose Jaw, Regina is 1-2-0-0 so far in the season series with the first three meetings all taking place at the Brandt Centre. Tonight’s game can be heard with Bennett Dunlop Ford Pats Hockey starting at 6:35 p.m. on 620 CKRM and will also be broadcast on Access 7.

The Lead Up: Pats snap slide with 2-1 win over Warriors Friday
The Regina Pats snapped a nine-game losing streak on Friday night with a 2-1 win over the Moose Jaw Warriors at the Brandt Centre. After a scoreless first period, the Warriors powerplay struck early in the second to open the scoring. Kaeden Taphorn picked up his third and Moose Jaw led 1-0. The Pats tied it up at 13:48, when Riley Krane potted his sixth off a turnover and it was 1-1. Regina took the lead late in the period when Steven Zonneveld stepped out of the penalty box and took a stretch feed from Jadon Joseph. Zonneveld skated into the left circle and snapped home his first career WHL goal to make it 2-1 and that was the score after two periods. In the third, the Warriors outshot Regina 8-4, but Dean McNabb stopped them all and the Pats held on for the 2-1 victory. The Pats were outshot 27-18, the powerplay was oh for four, the penalty kill three for four and Dean McNabb made 26 saves.

First Goal
Pats rookie defenceman Steven Zonneveld picked up his first career Western Hockey League goal on Friday night against the Warriors. The 17-year-old scored late in the second to give the Pats the 2-1 lead and that stood up as the game winner. Zonneveld was a listed prospect and signed with Regina out of training camp earlier this year. The product of Calgary, Alberta has a goal and two assists for three points in his first 15 games in the league.

Krane Back to Back
Pats forward Riley Krane has scored goals in back to back games for the first time in his WHL career. The 18-year-old picked up his fifth of the year on Wednesday in Swift Current and then got his sixth on Friday against Moose Jaw. Krane was drafted in the eighth round of the 2015 WHL Bantam Draft and is playing in his rookie season in the WHL. From Dawson Creek, B.C, Krane has scored three times in his last five games. For the season he has six goals and nine points in 29 games.

Pouteau Back In
Pats overage defenceman Brady Pouteau returned to the lineup last night against the Warriors. He missed the previous game in Swift Current with an upper-body injury. The 20-year-old was a plus one on Friday and had a shot on goal. The product of Oak Bluff, Manitoba missed the first 15 games of the year and has appeared in 17 games so far this season.