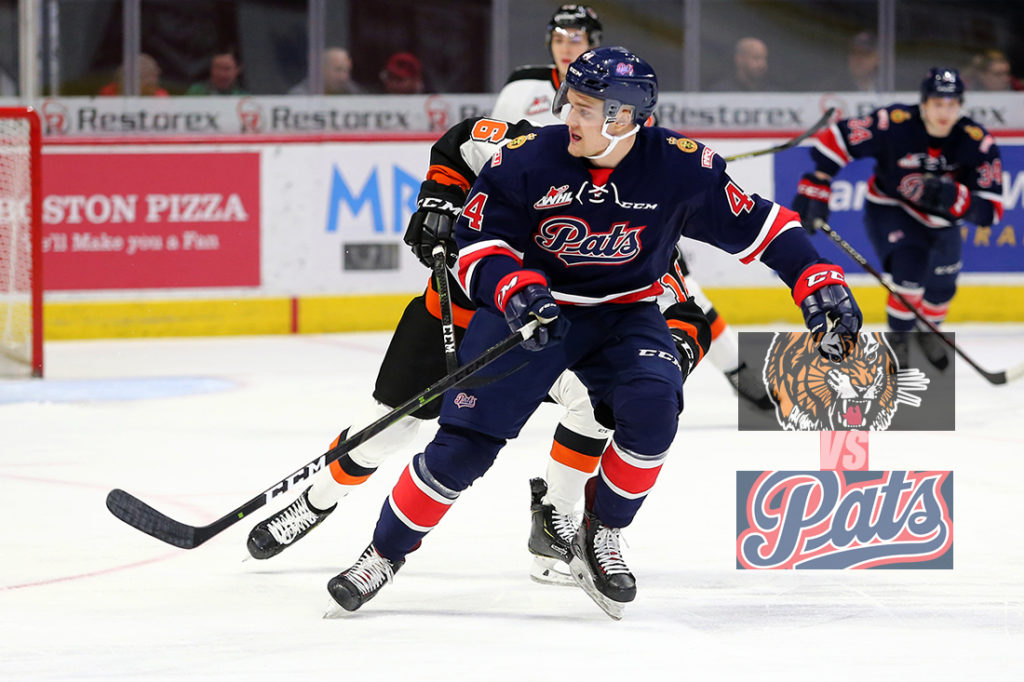 The Regina Pats (8-21-0-1) wrap up their three-game Alberta road trip on Saturday night against the Medicine Hat Tigers (14-14-1-2). Puck drop is at 8:30 p.m. Regina time at the Canalta Centre. The Pats were last in action on Friday night when they lost 4-3 in a shootout to the Red Deer Rebels. The Tigers last game was in Moose Jaw on Wednesday where they picked up a 6-5 overtime win. Tonight is the third of four meetings between Regina and Medicine Hat, the Tigers won the first two meetings at the Brandt Centre. Tonight’s game can be heard with Bennett Dunlop Ford Pats Hockey starting at 8:05 p.m. on 620 CKRM.

The Lead Up: Pats earn point in shootout loss to Red Deer Friday
The Regina Pats earned a single point in Red Deer on Friday in a 4-3 shootout loss at the Enmax Centrium. It was a tightly contested game to start the first period, Regina got through two penalty kills, but it was Red Deer who opened the scoring with 1:34 left in the period. Brandon Hagel tucked in his 19th and it was 1-0 Rebels after one. In second, the Pats drew even 42 seconds in when Austin Pratt banged home a rebound for his team leading 12th and it was 1-1. Regina then took their first lead at the 13:39 mark, Sergei Alkhimov buried a shot from the bottom of the right circle for his sixth and the Pats lead 2-1 after 40 minutes. In the third, Scott Mahovlich scored his fourth of the year, 1:12 into the frame and Regina led 3-1. The Rebels got one back at 11:49 and then tied it at 17:07 and it was 3-3 going to overtime. The extra frame solved nothing, in the shootout, Brett Davis scored the lone goal and the Rebels took the extra point in a 4-3 final. The Pats were outshot 34-28, the powerplay was oh for one, the penalty kill five for five and Max Paddock made 31 saves.

PK Success
The Pat are coming off another solid night on the penalty kill, going five for five in Red Deer on Friday. Regina’s penalty kill has been trending upwards going 35 for 44 in their last nine games for a 79.5 per cent success rate. The Pats had one tough night on the PK in that stretch, Wednesday in Edmonton when they were two for five. In the other eight games, the Pats have killed 33 for 39 for 84.6 per cent. For the season, Regina is up to 71.3 per cent, 20th in the Western Hockey League, ahead of Kootenay and Brandon. The Pats three shorthanded goals this year are tied for 10th most in the league.

200th Game
Pats overage defenceman Liam Schioler played in his 200th career WHL game on Friday night in Red Deer. The product of Winnipeg, Manitoba was drafted in the second round of the 2013 WHL Bantam Draft by the Pats and joined the club halfway through his 17-year-old season. Schioler played 35 games that year, 72 as an 18-year-old, 68 his 19-year-old season and 28 more this year. Schioler has also appeared in 30 playoff games and five games in the Memorial Cup. Schioler has two goals and 24 points to go along with 172 penalty minutes in his career, all with the Pats.

Alkhimov finding his touch
Pats rookie forward Sergei Alkhimov scored his sixth goal of the season on Friday in Red Deer. It was the second goal in the last three games for the 17-year-old from Moscow, Russia. Alkhimov leads all Pats rookies with 11 points in 29 games, three of which have come in the last six games. He is tied for 23rd in WHL rookie scoring.