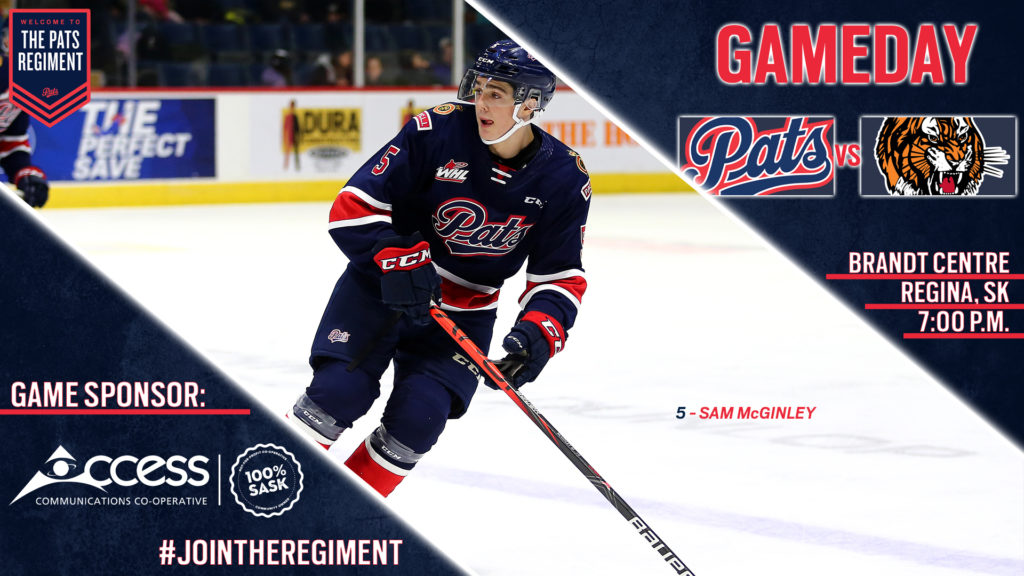 The Regina Pats (1-3-0-0) kick off a three games in three days weekend on Friday night at home to the Medicine Hat Tigers (3-2-0-0). Puck drop is at 7:00 p.m. at the Brandt Centre. The Pats were last in action on Sunday when they dropped a 5-2 decision at home to the Winnipeg ICE. The Tigers last game was Sunday as well, a 2-0 defeat at the hands of the Calgary Hitmen on the road. Friday will mark the first of four meetings between Regina and Medicine Hat in the 2019-20 season. Tonight’s game can be heard with Bennett Dunlop Ford Pats Hockey starting at 6:35 p.m. on 620 CKRM and will also be broadcast on Access 7.

Quick Facts
-Friday will start the first three in three of the season for the Pats. They will play three games in three days, three more times this year.
-The Pats are 1-2-0-0 on home ice this season.
-Regina went 0-4-0-0 against the Tigers in 2018-19 and are 3-7-0-0 in the last 10 meetings.
-Pats captain Austin Pratt has points in all four games so far this year, scoring twice and adding four assists for six points.
-Max Paddock is back in the lineup tonight after missing last weekend’s games against Prince Albert and Winnipeg.

Powerplay on the Board
The Regina powerplay scored their first two goals of the season on Sunday against Winnipeg. In the first three games of the year, the Pats had just three opportunities with the man advantage and did not score. On Sunday, the club went two for four on the powerplay, getting a first period goal from Robbie Holmes and another in the second period from Austin Pratt. The Pats now hold the fifth best powerplay in the Western Hockey League at 28.6 percent, with two goals on seven tries.

Pratt’s Streaking
Pats captain Austin Pratt continued his strong start to the season on Sunday with a goal and an assist against the Winnipeg ICE. The 20-year-old has his point streak to four games to start the year, scoring two goals and adding four assists in that stretch. He is averaging 1.50 points per-game this year and is on pace for a 34 goal, 102 point season. His previous career high was set last year when he scored 25 goals and had 51 points in 68 games. His six points this year is tied for 10th in league scoring.

Last Pats Game
The Regina Pats gave up three third period goals and fell 5-2 at home to the Winnipeg ICE on Sunday. The ICE picked up the game’s first goal on the powerplay at the 12-minute mark. Carson Lambos scored on a point shot to make it 1-0. Regina tied it with a powerplay goal of their own, Robbie Holmes picked a pass out of midair and directed home his second of the season and it was 1-1. 55 seconds later, Michal Teply replied for Winnipeg who led 2-1 after one. In the second, the Pats scored the lone goal of the period on the powerplay with 1:29 left. Austin Pratt jammed in his second of the season to tie it at two. In the third, the ICE scored three times in the first 12 minutes of the period to go up 5-2 and that was the final score. The Pats were outshot 25-21, the powerplay was two for four and the penalty kill went two for four. Austin Pratt and Robbie Holmes led the offence with a goal and an assist, while Danton Belluk made 20 saves.

Last Pats Game Vs Medicine Hat
January 11, 2019 – The Regina Pats got goals from Riley Krane and Sebastian Streu in a 5-2 loss to the Tigers in Medicine Hat. The game was tied at one after the first, but the Tigers scored four times in the second to the Pats one and led 5-2 after 40 minutes. Elijah Brown led Medicine Hat with a goal and two assists, while Brett Kemp scored twice and Corson Hopwo and Trevor Longo each had two assists. Dean McNabb and Matthew Pesenti combined to make 23 saves for Regina, while Jordan Hollett stopped 20 of 22 for the Tigers.