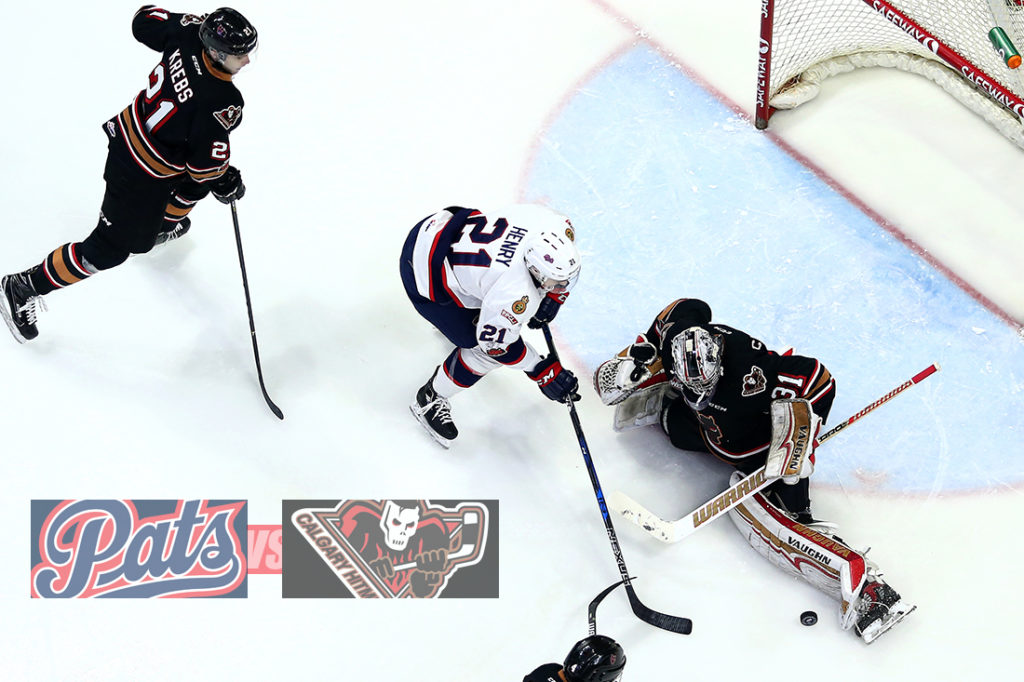 The Regina Pats (2-6-0-0) will wrap up their three-game road trip in the Central Division on Sunday afternoon against the Calgary Hitmen (1-5-1-0). Puck drop is at 2 p.m. at Scotiabank Saddledome. The Pats are coming off a 3-2 win in Cranbrook, B.C. over the Kootenay ICE on Friday night. The Hitmen were last in action on Friday as well, winning their first game of the season, 6-5 over the Lethbridge Hurricanes. This afternoon is the first of four meetings between the Pats and Hitmen in 2018-19. Today’s game can be heard with Bennett Dunlop Ford Pats Hockey starting at 1:35 p.m. on 620 CKRM.

The Lead Up: Pats earn big two points over Kootenay Friday
The Regina Pats got 29 saves from Max Paddock en route to a 3-2 road win over the Kootenay ICE on Friday night. Robbie Holmes opened the scoring for the Pats late in the first period, his fourth of the year and it was 1-0 after one. Sergei Alkhimov extended the lead to 2-0 when he scored on a penalty shot, his second of the year. Five minutes later, Austin Pratt ripped an absolute beauty into the top corner short side from the right circle for his fourth of the season and the Pats lead was 3-0. Kootenay got one back on the powerplay late in the frame and the Regina lead was 3-1 heading to the third. In the final period, Jaeger White scored on a breakaway for the ICE to cut the lead to 3-2. The Pats held on from there, including down two men for 54 seconds, and picked up the victory. The Regina powerplay was oh for two, the penalty kill four for five and Max Paddock made 29 saves for his first win of the year.

Holmes Sweet Holmes
Pats forward Robbie Holmes is on an offensive tear over his last six games. The 19-year-old was kept off the scoresheet in the first two games of the season, but since then has scored four goals and has an assist in the next six contests. The product of Sherwood Park, Alberta started off this road trip with a goal and an assist in Lethbridge on Wednesday and followed that up with a goal against the Kootenay ICE on Friday. His five points are tied for fifth on the team and his 24 shots on goal are tied for third best, behind only Nick Henry and Austin Pratt.

Win Streak
The Pats are looking to extend their win streak at the Scotiabank Saddledome to eight games this afternoon. Regina’s last loss on the road to Calgary came in October of the 2015-16 season, 5-1. Since then, the Pats have won five regular season games and two playoff games on the road against the Hitmen, outscoring their opponent 31-14 in the process. Last year, Jake Leschyshyn, Nick Henry, Robbie Holmes and Koby Morrisseau each had three points in the season series with Calgary, while Max Paddock went 3-0-0-0 with a 1.99 goals against average and a .915 save percentage.

Returns
Pats captain Jake Leschyshyn and forward Sergei Alkhimov returned from suspension on Friday against Kootenay and defenceman Liam Schioler returned from injury. Leschyshyn had an immediate impact winning 25 of 34 faceoffs in the win, going plus one with two shots on goal and two penalty minutes. Alkhimov scored his second goal of the season in his first game back and had three shots on goal. Schioler had missed the previous two games but came back and had 19:25 of ice time and one shot on goal.