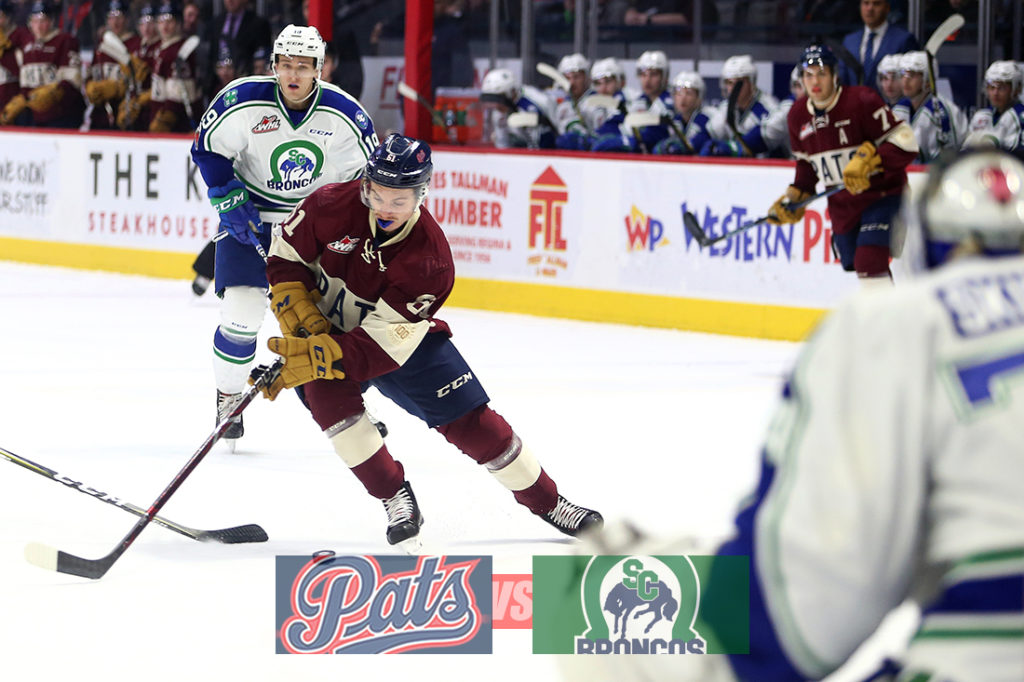 The Regina Pats (40-25-5-1) wrap up the regular season on Saturday night on the road against the Swift Current Broncos (47-17-5-2). Puck drop is at 7 p.m. at Innovation Credit Union Iplex. The Pats extended their win streak to seven games on Friday night when they outlasted Swift Current 3-2 in overtime. Tonight is the sixth and final meeting on the season between the Pats and Broncos, Regina holds a 1-4-0-0 record in the season series. The game can be heard starting at 6:35 with Bennett Dunlop Ford Pats Hockey on 620 CKRM.

The Lead Up: Pats extend win streak to seven in OT triumph over Swift Current
The Regina Pats picked up a seventh straight win on Friday night, 3-2 in overtime over the Swift Current Broncos at the Brandt Centre. With the win, the Pats will take on Swift Current in round one of the playoffs. After a scoreless first, the Broncos opened the scoring with a power play goal early in the second. The Pats got it back with a power play goal of their own from Sam Steel, his 33rd of the season to tie it 1-1. Jared Legien then gave Regina the lead with his 22nd and it was 2-1 after 40 minutes. In the third, Swift Current drew even with another power play goal and that forced overtime. In the extra frame, Nick Henry buried his 14th on a great move to the backhand and the Pats took the extra point in a 3-2 final. Regina was outshot 33-32, the power play went one for four and the penalty kill six for eight. Matt Bradley led the offence with two assists while Max Paddock made 31 saves.

Head to Head
Tonight is the sixth and final between the Pats and Broncos, Regina holds a 1-4-0-0 record so far in the season series. The Broncos have outscored the Pats 18-10 through the first five games. Cameron Hebig has 12 points against Swift Current this year, 11 of those as a member of the Saskatoon Blades. Matt Bradley is next with six points while Cale Fleury has four. The Broncos Aleksi Heponiemi and Glenn Gawdin each lead the way with eight points against Regina.

Playoff Matchup
For the second straight season and for the third time in four years, the Pats will meet the Swift Current Broncos in the playoffs. Regina has won both of the previous two post-season meetings. Games one and two will take place in Swift Current on March 23 and 24th. Games three and four will be back in Regina on March 26 and 28th.

New Career High
Pats forward Matt Bradley has set a new career high for points in a season thanks to his two assist night Friday against Swift Current. The 20-year-old enters the final regular season game of his WHL career with 78 points, one more than he has as a 19-year-old in Medicine Hat. Bradley’s 37 goals is also a career high. The Surrey, B.C. product is riding a six game point streak entering Saturday night with seven assists in that stretch.