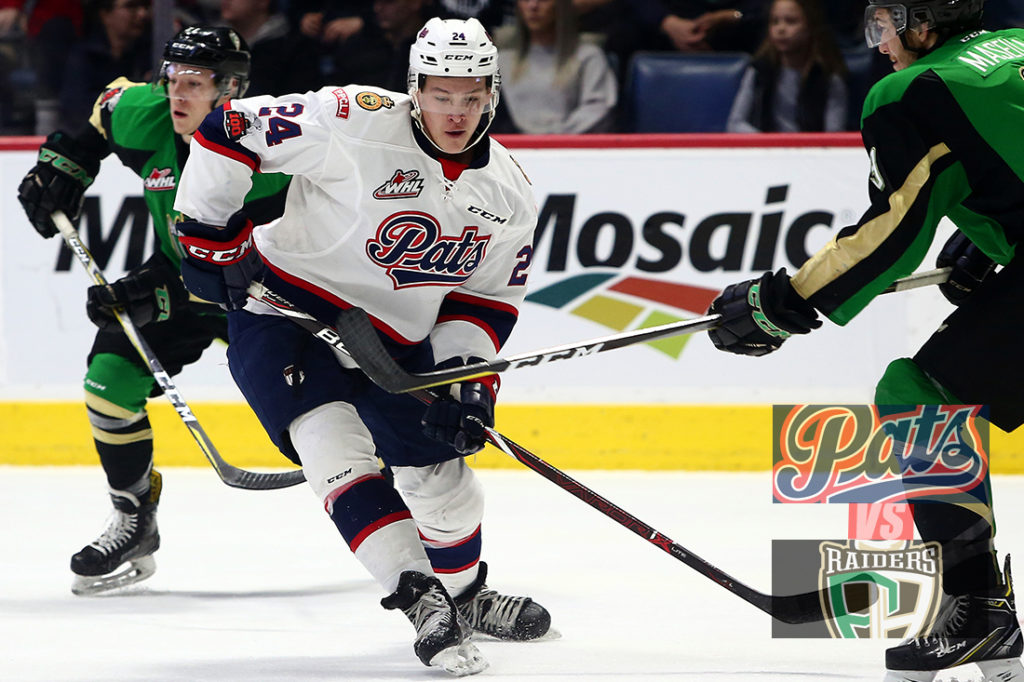 The Regina Pats (3-2-0-0) will wrap up the 2018 WHL Preseason tonight at home when they take on the Prince Albert Raiders (0-2-0-1). Puck drop is at 7 p.m. at the Brandt Centre. The Pats are coming off a 3-2 loss in Saskatoon on Thursday night, while the Raiders have been off since Saturday when they lost 4-3 in a shootout on the road to the Saskatoon Blades. Tonight is the sixth and final preseason game for Regina in 2018.

The Lead Up: Pats outlast Wheat Kings in a shootout Saturday
The Regina Pats dropped a 3-2 preseason decision in Saskatoon on Thursday night. The Blades scored twice in the first, Kirby Dach and Zach Ashton picking up markers, and the Pats trailed 2-0 after one. In the second, Garrett Wright got the Pats on the board with his second of the preseason and it was a 2-1 game heading to the third. Regina would tie it up on the powerplay when Wright made a great cross-ice pass to Robbie Holmes who scored his first and it was 2-2. However, the Pats found themselves down a man for a full five minutes late in the frame and Saskatoon would score to take the 3-2 lead and that was the final score. The Pats went one for five on the powerplay and the penalty kill was two for four. Matthew Pesenti and Carter Woodside combined to make 28 saves, while Garrett Wright led the offence with a goal and an assist.

Wright has a night
Pats forward Garrett Wright continued his strong play in the preseason on Thursday with a goal and an assist in Saskatoon. The 17-year-old has goals in consecutive games and three points in that stretch. The product of Mesa, Arizona was listed and signed during the 2017-18 season when he was a member of the Anaheim Jr. Ducks. Last year he put up 17 goals and 12 assists for 29 points in 32 games. Wright’s two preseason goals are tied for ninth among rookies and his three points is tied for 18th.

Holmes Returns
Pats forward Robbie Holmes retuned to the lineup on Thursday in Saskatoon after taking part in rookie camp with the NHL’s Colorado Avalanche. The 19-year-old had an assist with the Avalanche during the team’s rookie tournament in Las Vegas. Holmes scored a powerplay goal in the third period Saskatoon on Thursday to draw the Pats even 2-2.

Pratt on the scoresheet
Pats forward Austin Pratt picked up an assist on Thursday night in Saskatoon to reach four points in five games during the 2018 preseason. The 19-year-old scored three goals in the Pats first two preseason games and added a helper on the Pats first goal of the night in Saskatoon on Thursday. Pratt’s three goals are tied for ninth among all WHL skaters in the preseason and his four points is tied for 28th.