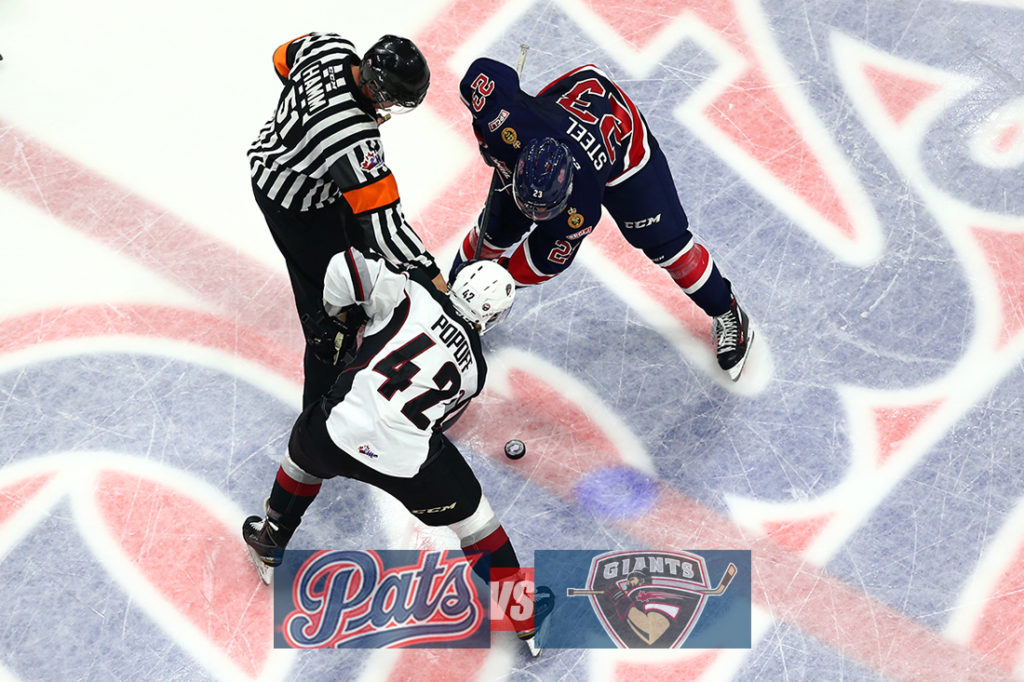 The Regina Pats (7-4-1-0) carry a four game winning streak into tonight when they host the Vancouver Giants (4-5-1-0). Puck drop is at 7:00 p.m. at the Brandt Centre. The Pats are coming off a 5-3 win over the Victoria Royals on Friday night. The Giants meanwhile lost 6-5 to the Brandon Wheat Kings. Tonight is the first and only meeting of the season between the Pats and Giants. The game can be heard starting at 6:35 with Bennett Dunlop Ford Pats Hockey on 620 CKRM.

The Lead Up: Big third powers Pats to fourth straight win
The Regina Pats scored four unanswered in the third period to win their fourth straight game, 5-3 over the Victoria Royals on Friday night at the Brandt Centre. The game was scoreless after one but in the second the Royals scored three times to the Pats one. Matt Bradley with the lone goal, his 10th of the season and it was 3-1 Victoria after 40 minutes. In the third, Bryan Lockner and Matt Bradley picked up goals in the first five minutes to tie the game 3-3. Then with just over seven minutes left, Marco Creta stole a pass at the offensive blueline and snapped home his first career WHL goal which would turn out to be the game winner. Jonathan Smart added an empty netter in the final minute and the Pats took the two points. Marco Creta, Sam Steel and Matt Bradley each had two point nights while Tyler Brown made 26 saves.

Head to Head.
The Pats and Giants meet for the only time this season on Saturday night at the Brandt Centre. Regina has won four in a row against Vancouver, their last loss on November 16, 2012 on the road. Last year the Pats won 8-3 at the Giants and picked up a 6-5 overtime win the last time Vancouver visited the Brandt Centre on October 9, 2015. Regina enters Saturday in fourth in the East Division with 15 points, three back of first place. The Giants are tied for second in the B.C. Division with 10 points, nine back of the first place Victoria Royals.

Creta Steps Up
The Pats got a big effort from rookie defenceman Marco Creta in Friday night’s win over Victoria. The 17-year-old scored his first ever WHL goal with just over seven minutes left which stood up as the game winner. Creta also added an assist for his first multi-point game of his career. The Oak Bluff, Manitoba product was a free agent training camp invite this fall and made the team. He has good numbers through his first eight games of his career with a goal and three assists.

Firsts
Two other Pats picked up their first goals of the year on Friday night against Victoria. Bryan Lockner kick started the comeback with a perfect shot into the top of the net from the bottom of the right circle early in the third period. His first of the season and second point. Then with 38 seconds left, Jonathan Smart scored into an empty net for his first goal of the season to seal the Pats fourth straight victory. Smart now has a goal and three assists in 12 games in 2017-18.