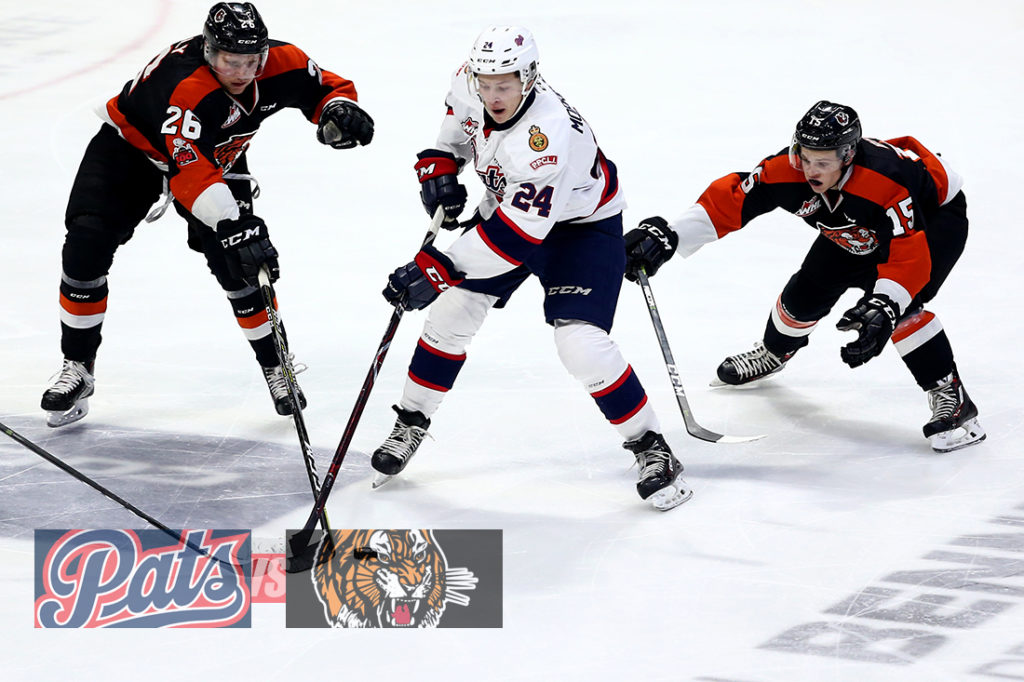 The Regina Pats (3-9-0-0) wrap up their four-game home stand on Friday night against the Medicine Hat Tigers (7-6-0-1). Puck drop is at 7 p.m. at the Brandt Centre. The Pats are coming off a 5-1 loss at home to the Everett Silvertips on Sunday, while the Tigers were home to the Red Deer Rebels on Wednesday and picked up a 4-1 victory. Tonight is the first of four meetings between the Pats and Tigers in 2018-19. Today’s game can be heard with Bennett Dunlop Ford Pats Hockey starting at 6:35 p.m. on 620 CKRM Two via 620ckrm.com and will also be broadcast on Access 7.

The Lead Up: Pats drop 5-1 decision to Everett Sunday
The Regina Pats fell 5-1 at home to the Everett Silvertips on Sunday afternoon at the Brandt Centre. Nick Henry got the scoring started in the game for the Pats with his third of the year, a powerplay goal at 6:59 to make it 1-0. Sean Richards tied it up for Everett three minutes later and it was 1-1 after one. In the second, Reece Vitelli tipped a point shot that went 30 feet in the air and dropped into the net behind Max Paddock and the Silvertips went ahead 2-1. Max Paddock made 17 saves after that in the period and the Pats trailed just 2-1 heading to the third. Everett made it 3-1, 15 seconds into the frame and then at 6:19 picked up a powerplay goal to make it 4-1. The Pats surrendered an empty netter in the final minutes and fell in a final score of 5-1. The Pats were outshot 32-21, the penalty kill was six for seven, the powerplay one for four and Max Paddock made 27 saves in the defeat.

200 Games
Pats captain Jake Leschyshyn played in his 200th career Western Hockey League game on Sunday against Everett. The 19-year-old is playing in his fourth full season in Regina and is a signed prospect of the NHL’s Vegas Golden Knights. Leschyshyn started his WHL career with the Pats as a 15-year-old in 2014-15 where he played 12 games and scored three goals. The product of Saskatoon has put up 50 goals and 110 points in his career and has five goals and 11 points in 11 games so far this season. Leschyshyn leads Regina with five powerplay goals and leads the entire WHL in faceoff wins (225) and faceoff win percentage (70.1%).

First Career Assist
Pats rookie defenceman Ryker Evans picked up his first career WHL point on Sunday with an assist on Nick Henry’s powerplay goal in the first period. Evans was drafted by the Pats in the 10th round of the 2016 WHL Bantam Draft and is playing in his 17-year-old season. From Calgary, Evans has played in all 12 games for the Pats this season, he is minus 2 and has 12 penalty minutes to go along with his one assist. Evans was a member of the 2017 Telus Cup Champion Notre Dame Hounds and was named the tournament’s top defenceman.

Penalty Kill Success
The Regina Pats put together their best two games on the penalty kill in their last two matchups with Moose Jaw and Everett over the weekend. On Saturday against the Warriors, the Pats killed five of six opportunities and followed that up with a six for seven night on Sunday against the Silvertips. In the two games, Regina was 11 for 13 on the PK for an 85.0 per cent success rate. Thanks to the two games, the Pats penalty kill has jumped from last place in the WHL at 64.2 % on the season, up to 68.2 % which is ahead of the Moose Jaw Warriors.