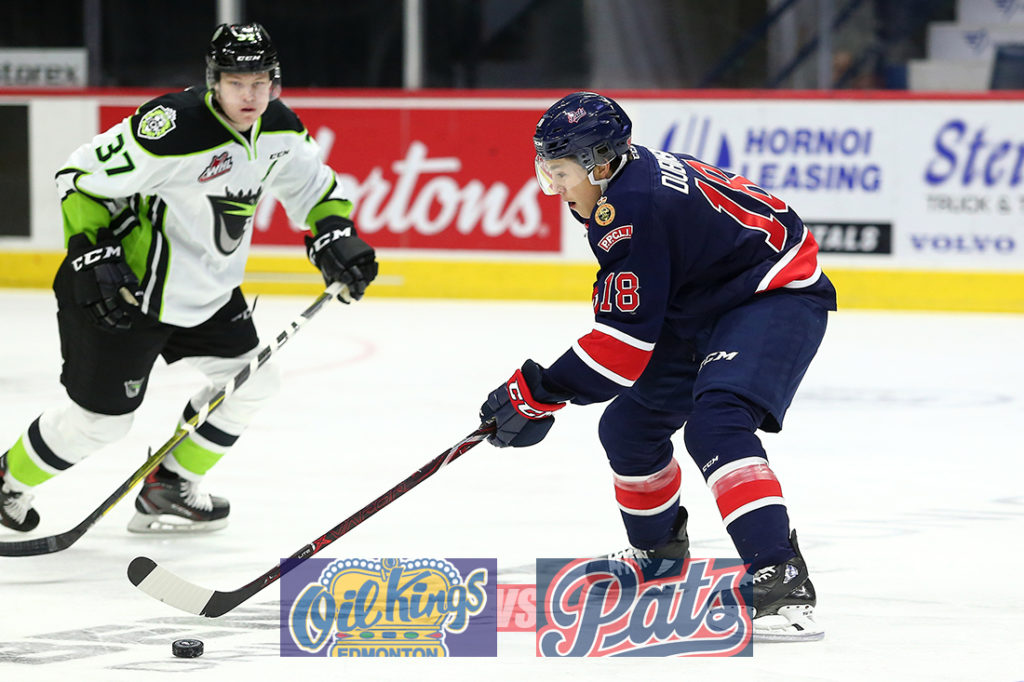 The Regina Pats (15-36-1-2) will wrap up their four game Central Division road trip on Sunday afternoon against the Edmonton Oil Kings (29-16-4-4). Puck drop is at 5:00 p.m. Regina time at Rogers Place. The Pats are coming off a 3-2 overtime win in Red Deer over the Rebels on Friday night. The Oil Kings last game was on Monday when they lost 5-1 at home to the Prince Albert Raiders. Tonight is the third of four meetings between Regina and Edmonton in 2018-19, the Pats are 0-2-0-0 in the season series. Tonight’s game can be heard with Bennett Dunlop Ford Pats Hockey starting at 4:35 p.m. on 620 CKRM.

The Lead Up: Ryker Evans First WHL Goal Lifts Pats Past Rebels
Ryker Evans scored his first career Western Hockey League goal with 2:13 left in overtime as the Pats downed the Red Deer Rebels 3-2 on Friday night. In the first, the Pats outshot the Rebels 12-7 but neither team would score, and it was 0-0 after 20 minutes. In the second, Red Deer opened the scoring 1:35 in off the stick of Cameron Hausinger. Just over a minute later, the Pats powerplay responded, Ty Kolle with his 12th of the year to tie it 1-1. The Rebels powerplay gave them the lead back halfway through the frame, but again Regina found a tying goal. This time Logan Nijhoff buried his fourth on a pretty feed from Blake Allan to make it 2-2 and that was the score after 40 minutes. In the third, the Rebels threw everything at the Regina goal, outshooting the Pats 17-2 but Max Paddock was sensational, and the game went to overtime tied 2-2. In the extra frame, the Pats went to the powerplay and on it, Ryker Evans ripped home his first career goal from the right circle to give the Pats the extra point in a 3-2 final. The Pats were outshot 33-27, the powerplay was two for four, the penalty kill four for five and Max Paddock made 31 saves in a second star performance.

First in the WHL
Pats rookie defenceman Ryker Evans scored his first career WHL on Friday in overtime in Red Deer. The 17-year-old scored from the right circle on the powerplay to give the Pats their second win in three games on their road trip. Evans was out of the Pats lineup from December 1 to February 1, missing 23 games with a lower body injury. In four games since returning to the lineup, the 17-year-old has scored his first goal and added an assist in two Pats wins.

Kolle Rolling
Pats forward Ty Kolle has found his scoring touch on this road trip through Alberta. The 18-year-old scored in a shootout in Lethbridge on Tuesday, scored his first career hat trick in Calgary on Wednesday and followed that up with a goal in Red Deer on Friday night. Kolle is having a career season with 12 goals and 22 points in 50 games, he leads the team with seven powerplay goals on the year and is second with 112 shots on goal.

Nijhoff Breaks Through
Pats forward Logan Nijhoff set a new career high in goals for a season on Friday with his fourth of the campaign. The 17-year-old played in 30 games last season, scoring three times and adding three assists. This year, the product of Comox, British Columbia has scored four times and has 14 points in 50 games played. Nijhoff had a goal and an assist on Friday in Red Deer, which was the first multi-point game of his Western Hockey League career. He has put 77 shots on goal in 50 games, that is fifth on the team and one of his four goals this season is a game winner.