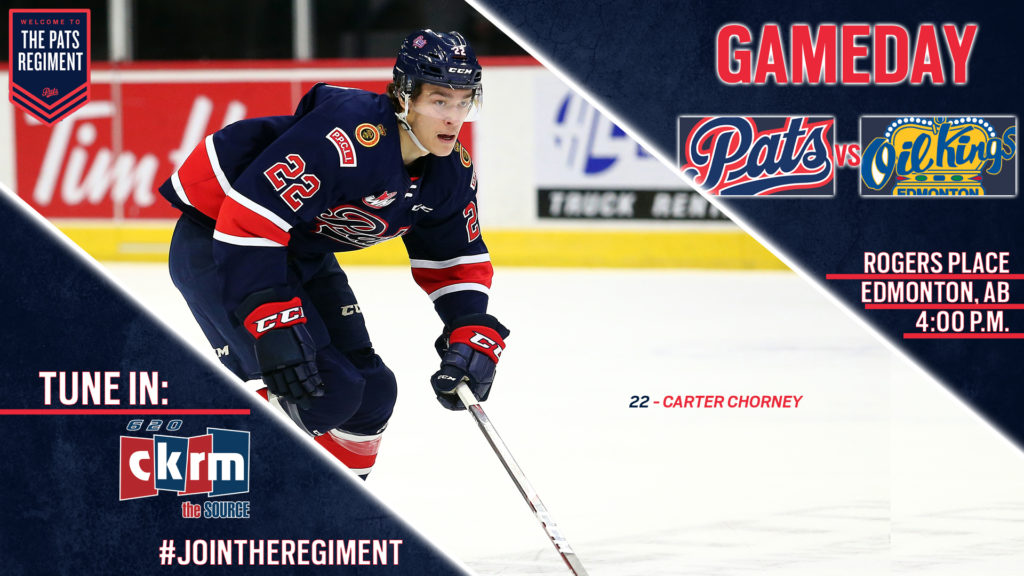 The Regina Pats (6-16-2-0) wrap up their three games in three days weekend Sunday in Edmonton against the Oil Kings (16-6-4-2). Puck drop is at 5:00 p.m. Regina time at Rogers Place. The Pats got 45 saves from Max Paddock on Saturday night in a 4-3 victory over the Red Deer Rebels. The Oil Kings hosted Calgary on Saturday and skated to a 5-4 win. Tonight is the second of four meetings between Regina and Edmonton, the Pats are 0-1-0-0 in the season series. The game can be heard with Bennett Dunlop Ford Pats Hockey starting at 4:35 p.m. on 620 CKRM.

Quick Facts
– The Pats will meet the Oil Kings for the second time on Sunday. Edmonton took the first meeting in Regina 5-3.
– The Pats are 5-6-2-0 in their last 13 games.
– The Pats are 3-8-2-0 against the Central Division this season.
– Max Paddock has made 150 saves in his last four starts, 125 of them coming in the last three games.
– Ty Kolle scored twice and Robbie Holmes once on Saturday to tie Austin Pratt for the team lead in goals with 10.
– Austin Pratt is third in the WHL with 117 shots on goal.
– Carson Denomie had a goal and an assist Saturday and has two goals and six points in seven games with the Pats.
– The Regina powerplay is eight for 21 in their last five games, they were eight for 82 in their first 19 games.

Denomie’s Strong Start
Forward Carson Denomie had a goal and an assist on Saturday in Red Deer and is off to a good start with the Pats since being acquired in a trade with the Moose Jaw Warriors. The 19-year-old has two goals and four assists in seven games with his hometown team. He has been a big part of the Pats turnaround on the powerplay, scoring a goal on the man advantage and adding four powerplay helpers in his first seven games with the team. Denomie is up to seven goals and 19 points in 26 games, that is second on the team in scoring.

Three Way Tie
Pats forwards Austin Pratt, Robbie Holmes and Ty Kolle are tied atop the club with 10 goals on the season. Kolle scored twice on Saturday to reach the 10-goal mark and Robbie Holmes 10th on Saturday proved to be the game winner. The trio makes up the Pats top line, they have combined to score 30 goals and 24 assists for 54 points. Their 30 goals account for 46.2 per cent of the team total goals of 65 through the first 24 games.

Last Pats Game
Max Paddock made 45 saves to lead the Pats to a 4-3 win in Red Deer over the Rebels on Saturday night. In the first, Ty Kolle scored 1:49 in, his ninth, and the Pats led 1-0. Red Deer tied it at 6:44 thanks to Ethan Sakowich, but 16 seconds later, Carson Denomie ripped home his seventh and Regina took the lead back at 2-1. The Rebels found another tying goal on the powerplay with six minutes left in the period. The Pats responded with a powerplay goal of their own, Ty Kolle snapped in his second of the night, 10th of the year, and Regina took a 3-2 lead to the break. In the second, Robbie Holmes gave the Pats a 4-2 lead with his 10th and Regina took that lead to the third. Red Deer got one back in the final frame, but Max Paddock capped off an incredible game with 12 saves in the period and the Pats held on for the 4-3 victory. The Pats were outshot 48-24, the powerplay was one for three and the penalty kill was five for seven. Ty Kolle and Carson Denomie led the offence with two-point nights, while Max Paddock made 45 saves.

Last Pats Game Vs Edmonton
October 8, 2019 – The Pats led 3-0 after the first period at home, but Edmonton scored five in the final two periods in a come from behind, 5-3 victory. Austin Pratt and Kyle Walker had a goal and an assist for Regina, while Max Paddock made 34 saves. Five different Oil Kings scored in the victory and Sebastian Cossa and Todd Scott combined for 15 saves.