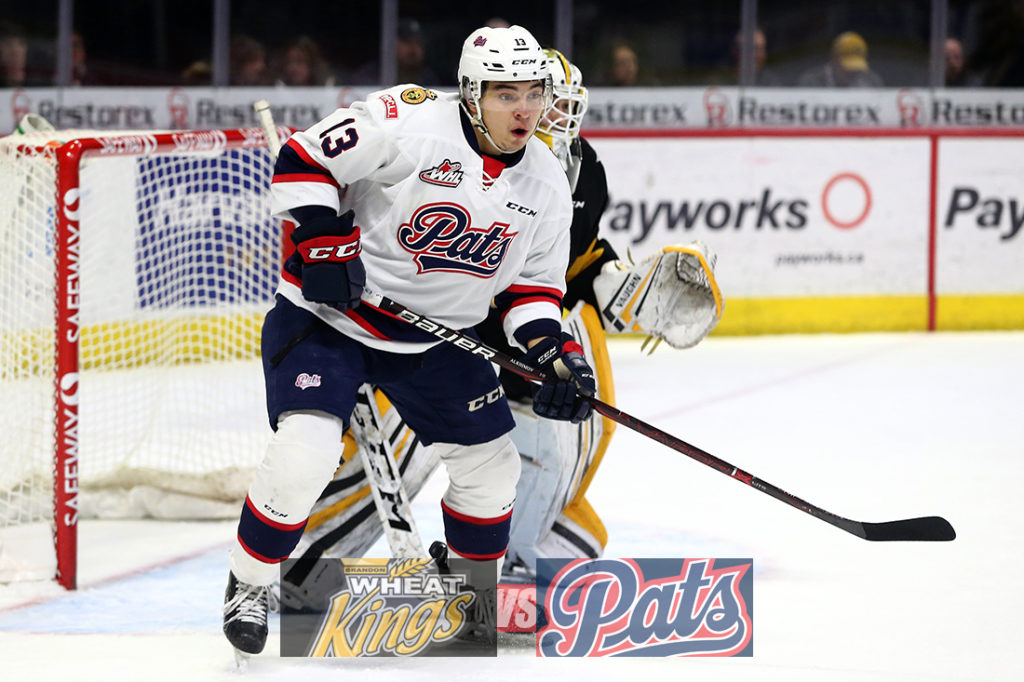 The Regina Pats (19-45-1-2) play their final game of the 2018-19 season on Saturday night on the road against the Brandon Wheat Kings (30-29-4-4). Puck drop is at 6:30 p.m. Regina time at Westoba Place. The Pats closed out the home portion of their schedule on Friday with a 5-4 win against the Wheat Kings at the Brandt Centre, snapping a seven-game losing streak. Tonight is the eighth and final meeting between Regina and Brandon in the 2018-19 season, the Pats are 4-2-0-1 in the season series. Tonight’s game can be heard with Bennett Dunlop Ford Pats Hockey starting at 6:05 p.m. on 620 CKRM.

The Lead Up: Pats close out home schedule with 5-4 win over Brandon Friday
The Regina Pats finished off their home schedule in 2018/19 with a 5-4 victory over the Brandon Wheat Kings on Friday night at the Brandt Centre. In the first, Cole Reinhardt and Luka Burzan would score for the Wheat Kings and they led 2-0 after the opening period, despite the Pats outshooting Brandon 14-9 in the period. In the second, the Pats found their first goal on the powerplay at 7:46. Cole Dubinsky buried his fifth of the year from the right circle and it was 2-1. Then, at 16:15 the Pats drew even when Sergei Alkhimov took a beautiful stretch pass from Brady Pouteau, drove the net and scored his 12th to make it 2-2 and that was the score after 40 minutes. In the third, the Wheat Kings took the lead 3-2 just 1:12 into the period. Eight minutes later, the Pats exploded for three goals in a span of 1:31 to take a two-goal lead. First, Liam Schioler got his fifth on a shot from the right point, Brett Clayton then tucked home his fifth to make it 4-3 and finally Sergei Alkhimov finished off his second of the night, 13th of the year, to make it 5-3 with nine minutes left. The Wheat Kings got one back with eight minutes left in the contest, but the Pats held on from there for a 5-4 victory. The Pats outshot the Wheat Kings 44-38, the powerplay was one for four and the penalty kill went two for two. Cole Dubinksy, Sergei Alkhimov and Nikita Sedov led the offence with two-point nights, while Dean McNabb made 34 saves.

Final Home Game
The Pats three overage players, Liam Schioler, Brady Pouteau and Brett Clayton had nights to remember in their final home game of their WHL careers. Both Schioler and Clayton scored their fifth goals of the season in the third and Pouteau set up Sergei Alkhimov for the Pats second goal in the second period. Schioler is up to five goals and eight points this season, Pouteau has five goals and 16 points, while Clayton has put up five goals and 10 points in his 20-year-old season.

Rookie Scoring
Seven Pats rookies put up at least a single point in Friday’s win over the Wheat Kings. Cole Dubinsky, Sergei Alkhimov and Nikita Sedov led the way with two points, while Carter Massier, Steven Zonneveld, Garrett Wright and Ryker Evans each had assists in the game. For the season, the Pats have gotten 43 goals and 99 points from 10 rookies. Alkhimov leads the way with 13 goals and 26 points, while Riley Krane has 12 goals and 24 points.