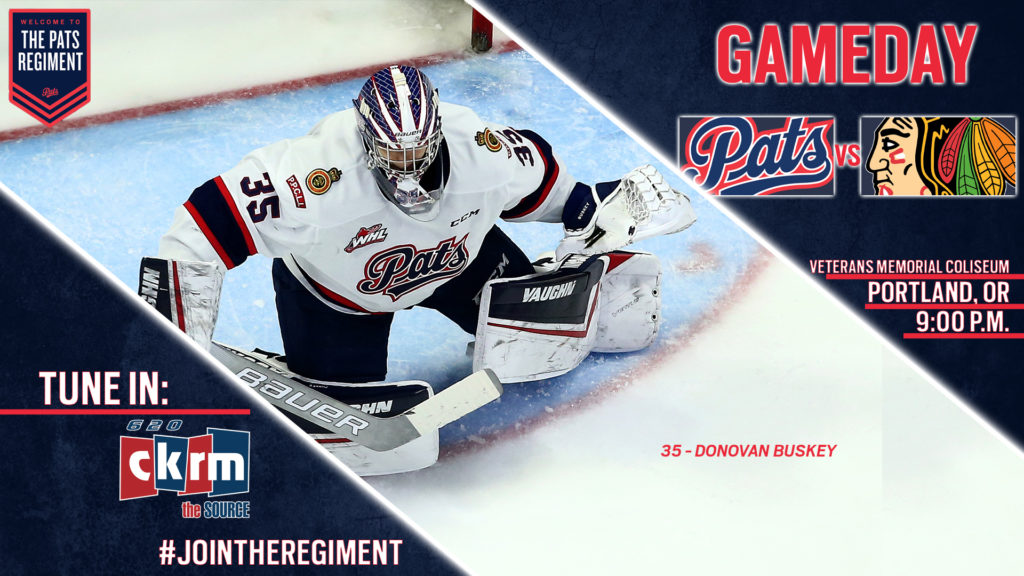 The Regina Pats (13-22-3-2) play the third game of their U.S. Division road trip on Tuesday night when they visit the Portland Winterhawks (29-6-2-3). Puck drop is at 9:00 p.m. Regina time at Veterans Memorial Coliseum. The Pats are coming off a big 6-3 win in Everett over the Silvertips on Sunday. The Winterhawks last game was on Saturday when they picked up a 6-5 overtime victory in Victoria. Tonight is the first and only meeting of the season between Regina and Portland, the Pats lost the lone meeting last year at home, 5-2. The game can be heard with Bennett Dunlop Ford Pats Hockey starting at 8:35 p.m. on 620 CKRM.

Quick Facts
– The Pats are 2-8-0-0 in their last 10 meetings with the Portland Winterhawks.
– Portland has won six straight games between the two clubs, the last Pats win was in October of 2012, 3-2 in overtime at the Brandt Centre.
– Robbie Holmes leads the Pats with two assists in four career games against the Winterhawks.
– Regina is 5-4-0-1 in 10 games since the Christmas break.
– Nikita Sedov had a career high four points on Sunday in Everett, picking up four assists.
– Drew Englot has scored three goals in two games to start the U.S. road trip.
– The Pats have called up 2019 first round pick defenceman Layton Feist for Tuesday’s game in Portland.

Career Night
Pats defenceman Nikita Sedov had a career high four-point night on Sunday when the Pats beat the Silvertips 6-3. The 18-year-old had four assists in the contest, doubling his season total for assists in a single game. Sedov’s previous career high for points in a game was three, when he put up three assists against the Brandon Wheat Kings last January. He scored a goal in Tri-City on Saturday night and has a goal and five points through the first two games of the road trip and is up to four goals and 12 points in 35 games this year.

Englot Rolling
Pats rookie forward Drew Englot is on a goal scoring tear in the second half of the season. The 17-year-old has put up six goals in the Pats 10 games since the Christmas Break, four times picking up single goals in a game and on Saturday had his first multi-goal game of his career against Tri-City. Englot leads all Pats rookies with nine goals and 12 points on the season. He was held pointless in his first 12 games in the league, but has 12 points in the 27 games since. Two of Englot’s goals have come on the powerplay and one was a game winner.

Last Pats Game
Nikita Sedov had four assists and Donovan Buskey made 36 saves to lead the Pats to a 6-3 win in Everett over the Silvertips on Sunday night. The first period saw both teams score, Regina getting a goal from Zack Smith, his seventh. The Pats started the second with the powerplay and Carson Denomie made it 2-1 with his 13th of the season, 1:04 into the period. Riley Krane extended the lead on a second man advantage, his 11th at 2:07 and the Pats led 3-1. Everett scored on a powerplay of their own at the nine minute mark to cut the lead to 3-2 and that was the score through 40 minutes. In the third, the Pats got an early goal from Drew Englot on a tip in front for his ninth. 41 seconds later, Robbie Holmes scored a beauty for his 16th, ending the night for Silvertips goaltender Dustin Wolf in a 5-1 game. Everett got a goal back with six minutes left in the third, but Regina got an empty netter from Austin Pratt with just over a minute left and took the two points in a 6-3 final score.

Last Pats Game Vs Portland
January 9, 2019 – Austin Pratt and Liam Schioler scored the goals in the Pats 5-2 home loss to Portland. The Winterhawks were led by Jake Gricius who had a three-point night. Dean McNabb stopped 30 of 34 shots for the Pats, while Shane Farkas made 24 saves on 26 shots for Portland.