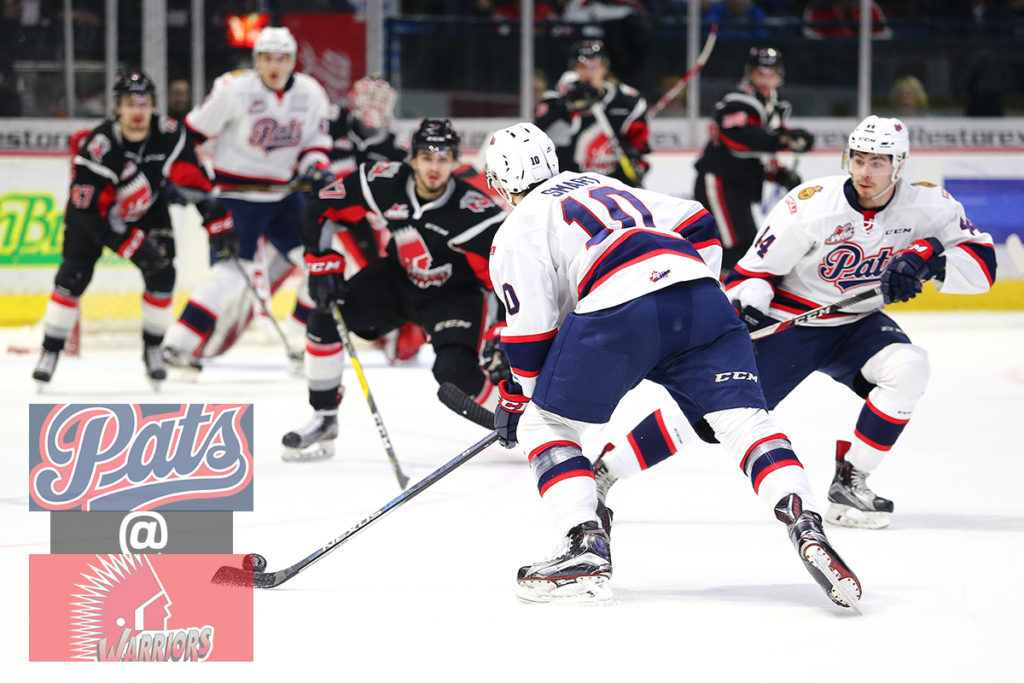 The Regina Pats (47-12-7-1) hit the road tonight for the back half of a home and home set with the Moose Jaw Warriors (41-18-7-1). Puck drop is 7 p.m. at Mosaic Place. The Pats shutout the Warriors on Friday night in the first half of the weekend series, 5-0 and clinched the East Division title in the process. Regina is 4-3-0-0 against Moose Jaw this season heading into tonight’s eighth and final meeting of the year. The game can be heard on 620 CKRM with Bennett Dunlop Ford Pats Hockey beginning at 6:35 p.m. The game will also be shown on Access 7 and the WHL on Shaw.

Lead Up: Pats Beat Warriors and Clinch Division Title Friday
The Regina Pats clinched the East Division title on Friday night with a 5-0 win over the Moose Jaw Warriors at the Brandt Centre. The Pats opened the scoring in the first on the poweplay when Adam Brooks picked up his 37th of the season. In the second, Josh Mahura, Nick Henry and Sam Steel all scored and it was 4-0 after two periods. Steel would add his second of the night, 48th of the season in the third to make it 5-0 and that was the final score. Steel led the way with two goals and two assists while Tyler Brown made 26 saves for his fifth shutout of the year.

Head to Head
The Pats carry a 4-3-0-0 record against the Warriors into tonight’s final meeting of the regular season. The Pats are 3-1-0-0 on home ice in the season series and 1-2-0-0 in Moose Jaw. Regina has scored 26 goals in the six games, the Warriors have 24. The Pats have outshot the Warriors 293-212, the powerplay is eight for 23 and the penalty kill 23 for 32. Sam Steel has scored six goals and has eight assists for 14 points against the Warriors this year. Adam Brooks has four goals and 10 points while Connor Hobbs and Austin Wagner have seven. Moose Jaw’s Brett Howden has scored four goals and has 10 points against Regina. Noah Gregor, Tanner Jeannot and Brayden Burke have six points in the series.

Division Title
The Pats clinched the East Division title with their win over the Warriors on Friday night. It is the first division title for Regina since the 2013-14 season when the club went 39-26-4-3 and had 85 points in the standings. This year’s division champs are 47-12 -7-1 for 102 points through 67 games. The 102 points has set a new franchise record for a season, beating the previous record of 100 set in 1980-81. The Pats are now four points away from clinching the WHL regular season and Eastern Conference title, two wins or two Medicine Hat losses.

Brown Heating Up
Since returning from a lower body injury On January 28, Pats goaltender Tyler Brown has made 15 starts, going 11-4-0-0. The Winnipeg product has put up a 2.00 goals against average, a .933 save percentage and three shutouts in those games, improving his record to 30-8-5-1 on the season. For the year, Brown holds the fourth best G.A.A. in the WHL at 2.64, the eighth best save percentage at .912 and is tied for second with five shutouts.