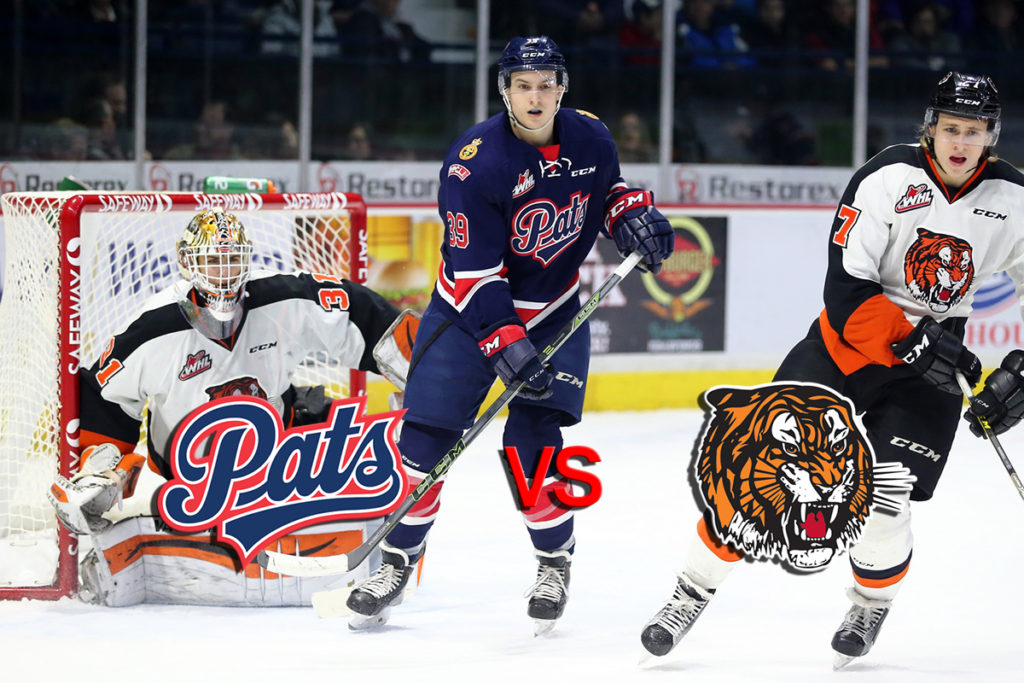 The Regina Pats (25-3-6-1) hit the road Tuesday for a matchup with the Central Division leading Medicine Hat Tigers (27-11-1-0). Puck drop is at 8 p.m. Regina time at the Canalta Centre. The Pats are coming off a 7-2 win over the Prince Albert Raiders on Sunday and have nine of 10 possible points in their last 5 games. The Tigers were last in action on Friday and lost at home to the Lethbridge Hurricanes 9-7. Tonight is the second of four meetings between the Pats and Tigers. The Pats won the first meeting in October. Tonight’s game can be heard on 620 CKRM with Bennett Dunlop Ford Pats Hockey beginning at 7:35 p.m.

Lead Up: Pats Start 2017 With Victory over P.A.
The Regina Pats kicked off 2017 with a 7-2 victory over the Prince Albert Raiders at the Brandt Centre on Sunday. The Pats scored twice in the first, twice in the second and three times in the third in the win. Adam Brooks and Austin Wagner led the way with three point nights. Bryan Lockner scored his first career WHL goal as part of a two point night as well. Goaltender Max Paddock made his first WHL start and made 30 saves for his first win. The Pats outshot the Raiders 72-32 in the contest and improved to 25-3-6-1 on the year.

Head to Head
The Pats hold a 1-0-0-0 record against the Tigers this season. The previous meeting was on October 22, which the Pats won 8-5. Lane Zablocki scored a hattrick and an assist in the win while Austin Wagner had a goal and three helpers. Mark Rassell, Max Gerlach and Clayton Kirichenko had two point nights for the Tigers. The Pats hold the WHL’s top powerplay at 30.2%, the Tigers are second at 28.4 %. The Pats lead the league with 192 goals, the Tigers are close behind with 189. The Pats enter Tuesday night, two points ahead of Medicine Hat for first in the Eastern Conference.

Pats acquire Sloboshan from Spokane
The Pats acquired 19-year-old forward Wyatt Sloboshan and a third round pick in 2017 from Spokane on Monday. In exchange, the Pats send 19-year-old forward Rykr Cole and 18-year-old forward Riley Woods to the Chiefs. Sloboshan, in 30 games this season, has four goals and 12 assists for 16 points. He started the year with the Saskatoon Blades but was traded to Spokane just prior to the Christmas break. He played in just one game with the Chiefs. For his career, Sloboshan has 33 goals and 91 points in 146 games. Rykr Cole was drafted in the third round of the 2012 WHL Bantam Draft by the Pats. In 166 games, he has scored 27 goals and has 57 points. Riley Woods is a list player and has 15 goals and 27 points in 59 games.