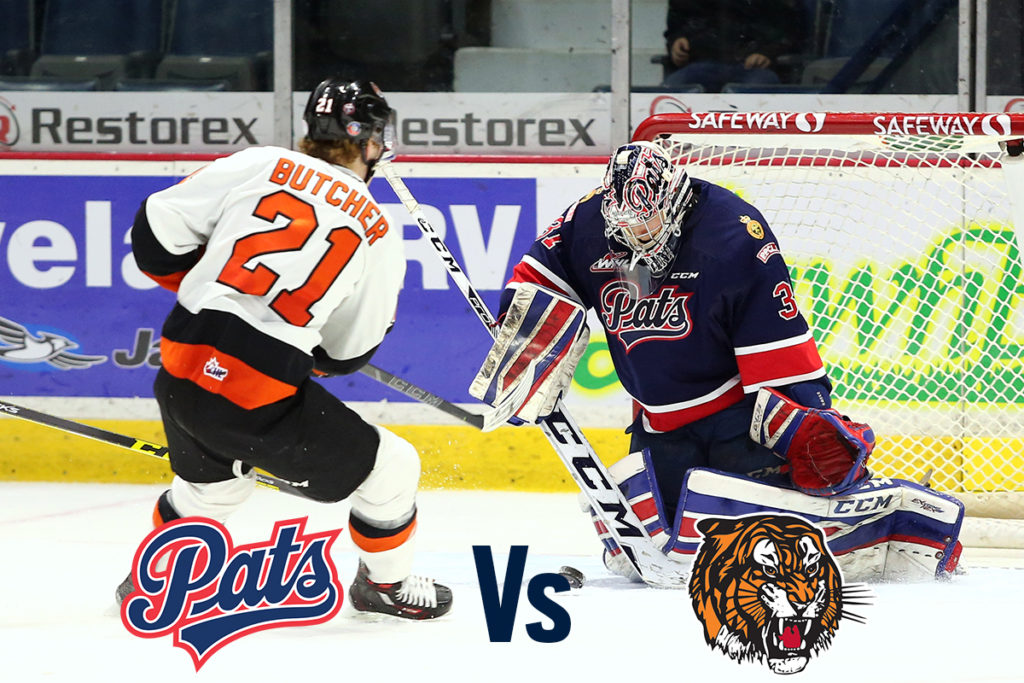 The Regina Pats (8-0-3-0) carry a four game winning streak into Medicine Hat on Saturday night against the Central Division leading Tigers (8-3-1-0). Puck drop at the Canalta Centre is at 7:30 p.m. The Pats are coming off a 4-2 win over the Spokane Chiefs on Friday night at the Brandt Centre. The Tigers meanwhile won their second consecutive game over the Kootenay Ice on Friday 4-1. Tonight’s game can be heard on 620 CKRM TWO via 620ckrm.com with Bennett Dunlop Ford Pats Hockey beginning with the pre-game show at 7:05 p.m.

Lead Up: Pats Shorthanded Success Leads to 4th Straight Win
The Pats exploded for three shorthanded goals in the second period to beat the Spokane Chiefs at the Brandt Centre on Friday night, 4-2. Luc Smith gave the Pats the 1-0 lead in the first but Curtis Miske tied it up for Spokane and it was 1-1 after 1. In the second Austin Wagner scored twice shorthanded and Jake Leschyshyn added another to give the Pats the 4-1 lead and they cruised from there to their fourth straight win. Jordan Hollett was named the games second star, making 28 saves for his 4th win of the season.

Leading Shorthanded
The Pats are atop the WHL in shorthanded goals with nine through 11 games on the 2016/17 season. The Brandon Wheat Kings are second in the league with five. On Friday night the Pats scored three times down a man on six shorthanded situations.  It was the second time this season the Pats had scored three shorthanded in one game. The first was October 2nd at home to the Red Deer Rebels in a 7-2 win. Austin Wagner leads the team with three shorthanded goals in six games played. Jake Leschyshyn and Sam Steel each have two and Braydon Buziak and Dawson Leedahl have one. In 2015/16 the Pats scored 13 times shorthanded which was fourth best in the WHL.

Streaking
Defenceman Chase Harrison extended his point streak to six games on Friday night with a helper in the second period. Harrison has one goal and eight assists over that stretch. The overager out of Winnipeg has recorded 14 points in the first 11 games of the season (2G, 12A). He and teammate Sergey Zborovkiy are tied for the WHL lead at plus 17. Adam Brooks also extended his point streak on Friday night. The 20-year-old Toronto Maple Leafs prospect has at least a point in every game he has played this year (3G, 6A).

Point A Game
The Pats and Medicine Hat Tigers lead the Eastern Conference in goals for with 54 each. The Pats have played one less game and are averaging 4.9 goals per contest. Nine members of the Regina Pats are at a point a game or better to start the year. Sam Steel has 19 points in nine games, Jake Leschyshyn 14 in 11, Chase Harrison 14 in 11, Filip Ahl 13 in 11, Dawson Leedahl 12 in 11, Nick Henry 11 in 11, Adam Brooks nine points in five games, Connor Hobbs 10 points in nine and Austin Wagner six points in six games played. Beyond that, every player on the roster has at least a point so far this season.