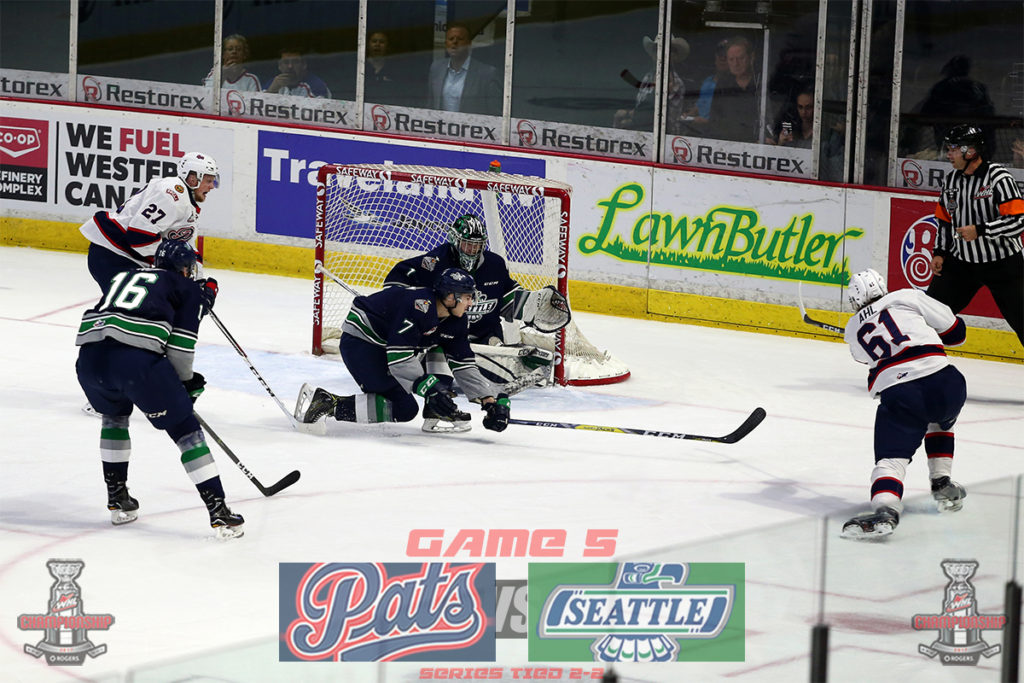 The Regina Pats (14-7) are on the road tonight for game five of the WHL Championship Series, presented by Rogers, in Seattle against the Thunderbirds (14-4). Puck drop at the ShoWare Center is 8:30 p.m. Regina time. The Pats lost in game four on Wednesday night and the best-of-seven series is tied at two games apiece. The game can be heard on 620 CKRM with Bennett Dunlop Ford Pats Hockey beginning at 8:05 p.m. It will also be broadcast on the WHL on Shaw and Access 7.

Lead Up: Pats Fall in Game Four Wednesday
The Regina Pats dropped game four of the WHL Championship Series on Wednesday night, 6-1 to the Seattle Thunderbirds. The series is now tied at two. The Pats opened the scoring on the powerplay in the first when Sam Steel potted his 10th from the right circle. However, Seattle scored three times late I the first and added three more in the second to lead 6-1 and that was the final score. The Thunderbirds outshot Regina 36-19 in the win, Tyler Brown and Jordan Hollett combined to make 30 saves for the Pats, Carl Stankowski made 18 saves for the Thunderbirds. The Regina powerplay was one for three and the penalty kill five for seven.

Series At A Glance
The Pats and Thunderbirds have split the first four games of the WHL Championship Series, both clubs picking up a win at home and a win on the road. The Pats have scored nine goals while the Thunderbirds have 13 through the first four games. The Pats have been outshot by the Thunderbirds 130-105. The Regina powerplay has gone six for 17 and the penalty kill 13 for 18. Sam Steel leads the Pats with two goals and three assists through four games. Josh Mahura has four  points while Dawson Leedahl and Filip Ahl have three. Tyler Brown is 2-2 with a 3.46 GAA and a .889 SV%. Seattle is led by Ethan Bear who has put up six points in the series. Mathew Barzal is next with five while Alexander True, Ryan Gropp and Keegan Kolesar have four points each. Carl Stankowski is 2-2 with a 2.21 goals against average and a .914 save percentage.

Game Five’s
The Regina Pats will play in their third game five of the 2017 WHL Playoffs on Friday night. Regina swept Calgary in the first round but needed seven games to get by Swift Current in round two and six games against Lethbridge in the third round. The Pats won both game fives in those series. Against the Broncos, Regina was facing elimination in game five but won that game and eventually the series. Against Lethbridge, the Pats took a 3-2 series lead with a win in game five and then closed out the series on the road in game six. In those two games, the Pats scored a total of eight goals and given up five. Regina has outshot their opponent 68-63 in game five’s while the powerplay has gone two for six and the penalty kill eight for eleven. Sam Steel and Adam Brooks each have four points in those games, Dawson Leedahl and Austin Wagner each have three points. Tyler Brown has stopped 59 of 64 shots for a .921 save percentage and a 2.50 goals against average.