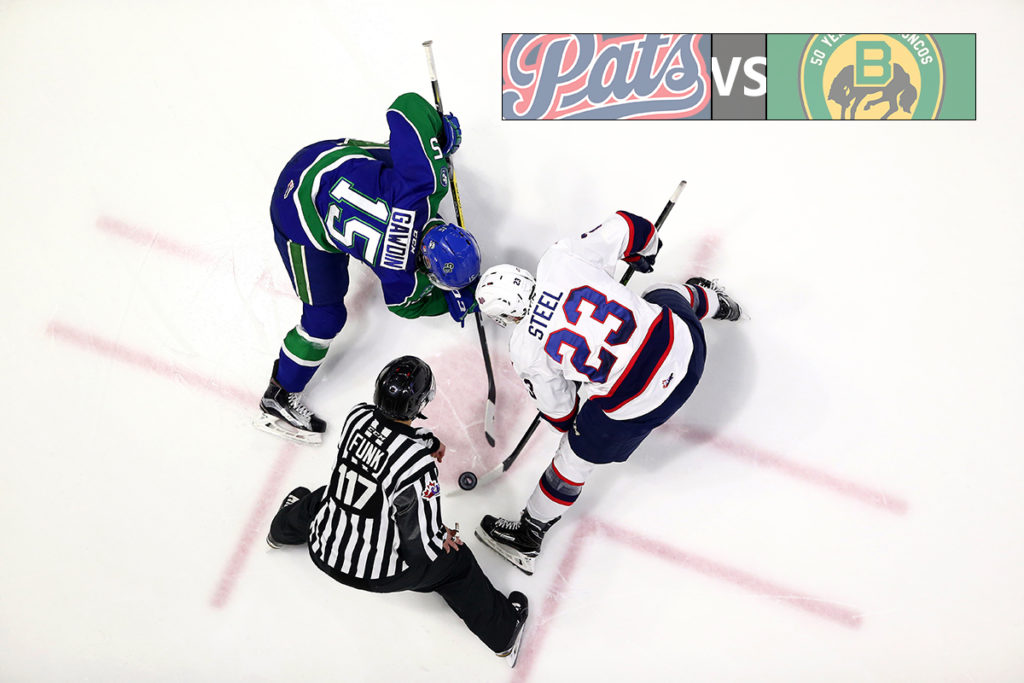 The Regina Pats (45-12-7-1) head to Swift Current for the final time this season tonight to take on the Broncos (35-20-4-6). Puck drop is 7 p.m. at the Credit Union Iplex. The Pats were last in action on Sunday in Brandon, beating the Wheat Kings 4-2. The Broncos were in Prince Albert on Tuesday night, winning a fifth straight game, 4-2 over the Raiders. Tonight is the seventh of eight meetings between the Pats and Broncos. Regina is 5-0-1-0 in the season series. The game can be heard on 620 CKRM with Bennett Dunlop Ford Pats Hockey beginning at 6:35 p.m.

Lead Up: Pats End Slide in Brandon Sunday
The Regina Pats snapped their four game winless streak on Sunday afternoon with a 4-2 victory in Brandon over the Wheat Kings. The Pats opened the scoring shorthanded in the first thanks to Adam Brooks and led 1-0 after 20 minutes. Connor Hobbs scored in the second for the Pats, his 28th but Brandon got two and it was a 2-2 game heading to the final period. Sam Steel gave the Pats the lead for good, 2:24 into the third, with his 46th and Wyatt Sloboshan added an empty netter to give the Pats the two points. Regina outshot Brandon 54-38, Tyler Brown made 36 stops for the Pats, Logan Thompson 50 for the Wheat Kings. The Regina powerplay was one for five and the penalty kill was four for five with a shorthanded goal.

Head to Head
The Pats hold a 5-0-1-0 record against Swift Current heading into tonight’s seventh meeting of the season. Regina has won twice at home and three times on the road in the season series, losing once at home in overtime. The Pats have scored 33 goals to the Broncos 14 in the first six games. Regina has outshot Swift Current 270-155, the powerplay has gone 10 for 27 and the penalty kill 15 for 20. Sam Steel and Nick Henry each have six goals and 15 points in six games against Swift Current. Dawson Leedahl has put up 14 points, Adam Brooks 11 and Connor Hobbs 10. Tyler Brown is 3-0-0-0 with a 1.33 GAA, a .942 save percentage and one shutout in the season series. The Broncos are led by Aleksi Heponiemi who has scored three goals and has six points against the Pats. Ryley Lindgren, Max Lajoie and Lane Pederson have five a piece. The Pats currently lead the WHL with 98 points through 65 games, the Broncos sit third in the East Division with 80 points in 65 games.

Wagner Signs
Pats forward Austin Wagner signed a three year entry-level contract with the Los Angeles Kings on Monday. The 19-year-old product of Calgary was a fourth round pick, 99th overall, by the Kings in the 2015 NHL Entry Draft. Wagner is on pace for a career year with 28 goals and 60 points through 58 games this year. 28 goals ties his personal best from last season in 70 games. Wagner is on pace to put up 67 points this year, five better than his totals from 2015-16 when he had 62 in 70 games. Wagner is currently tied for second in the WHL with five shorthanded goals and has 17 for his career.