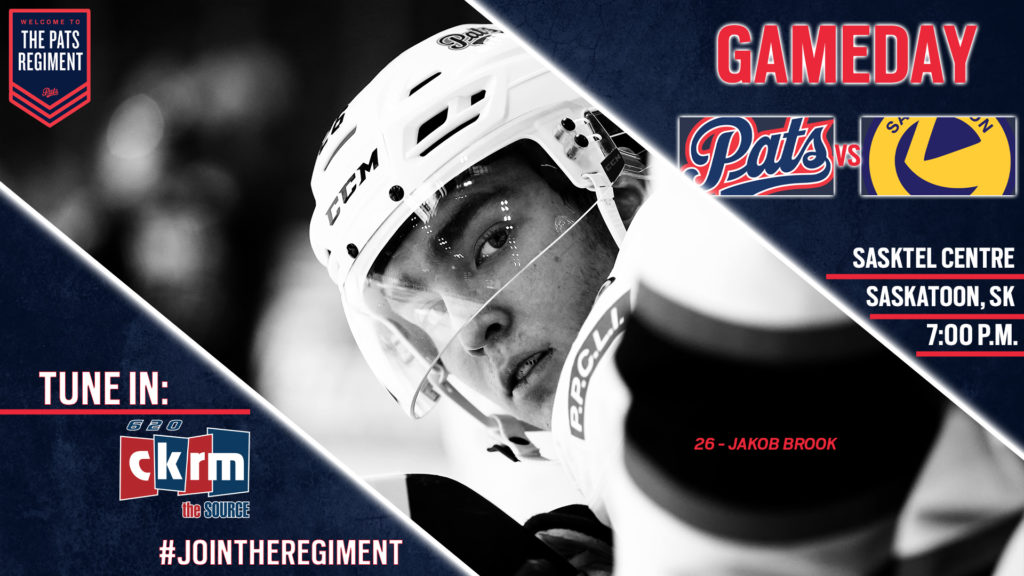 The Regina Pats (21-33-4-2) will hit the road on Friday night to take on the Saskatoon Blades (31-24-2-3). Puck drop is at 7:00 p.m. at the SaskTel Centre. The Pats last game was on Tuesday night when they beat the Moose Jaw Warriors 7-4 at the Brandt Centre. The Blades last game was Wednesday night when they hosted the Calgary, losing 4-3 to the Hitmen. Tonight is the fourth of six meetings on the year between Regina and Saskatoon, the Pats are 2-1-0-0 so far in the season series. The game can be heard with Bennett Dunlop Ford Pats Hockey starting at 6:35 p.m. on 620 CKRM.

Quick Facts
– The Pats are 4-5-1-0 in their last 10 meetings with Saskatoon and are 2-1-0-0 in the 2019-20 season series.
– Regina is 12-15-1-1 in their 29 games in the second half of the season.
– Saskatoon product Zack Smith had two goals in his last three games and leads all Pats rookies with 18 points.
– Donovan Buskey is 5-1-0-0 in his six career starts against the Blades.
– 17-year-old goaltender Spencer Welke made 20 saves and won his first career WHL start on Tuesday.
– Cole Carrier had a career high two goals and three points against Moose Jaw on Tuesday night.
– Austin Pratt had two assists Tuesday and leads the team with 54 points, that is a new high for his career.

First Start, First Win
Goaltender Spencer Welke made his first start in the Western Hockey League on Tuesday night, making 20 saves en route to his first win in the league. The 17-year-old was called up after his season ended with the Prince Albert Mintos of the SMHL on Saturday. The product of Yorkton, Saskatchewan played in 18 games with the Mintos this season, posting a 9-9-0 record with a 2.89 goals against average and a .910 save percentage. He was a listed prospect by the Pats and signed in October of 2019.

Career Night
Pats forward Cole Carrier broke out for two goals and an assist on Tuesday night against Moose Jaw for the first three-point game of his WHL career. The 17-year-old opened the scoring for Regina in the first period and added the fourth goal of the game in the third. Carrier has played in 16 games with the Pats since being acquired from the Kelowna Rockets, he has put up three goals and five points in those 16 games. He started the year in the AJHL with the Whitecourt Wolverines where he had six goals and 13 points in 30 games. He was originally a fourth-round pick by Kelowna in the 2017 WHL Bantam Draft.

Last Pats Game
Cole Carrier and Carson Denomie each had three points, while Spencer Welke made 20 saves in his first WHL start and the Regina Pats beat the Moose Jaw Warriors 7-4 at the Brandt Centre on Tuesday night. In the first, the Pats took an early lead when Cole Carrier buried his second of the season at the 3:44 mark. The Warriors tied it on a penalty shot at 5:19 and then took a 2-1 lead at 7:21 of the first on a goal from Carson Sass. The Pats responded at 16:34 when Ryker Evans slid home his seventh and it was 2-2 after the opening period. In the second, Regina took the lead at 3:10 when Logan Nijhoff tipped in a point shot for his 15th to make it 3-2. The Pats outshot Moose Jaw 13-4 in the frame and took a 3-2 lead to the third. Cole Carrier added to the lead, 3:38 into the third with his second of the night and third of the season. Zack Smith then scored his 12th and Carson Denomie his 21st and the Pats went up 6-2. The Warriors came back with two goals and trailed 6-4 with eight minutes left to play. Regina would seal it on a goal from Carter Chorney, his seventh, to make it 7-4 and that was the final score.

Last Pats Game Vs Saskatoon
February 21, 2020 – Austin Pratt and Cole Dubinsky each had a goal and an assist in the Pats 6-3 loss at home to the Blades. Scott Walford led Saskatoon with three points. Donovan Buskey made 30 saves for the Pats in the defeat.