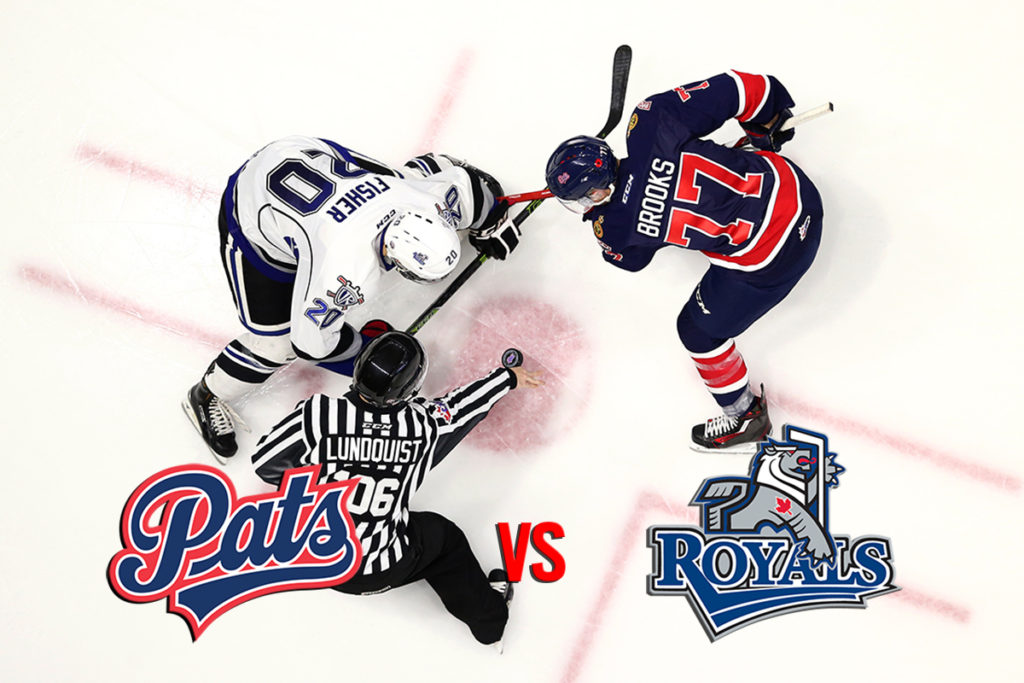 The Regina Pats (15-0-3-0) carry an 11 game winning streak into Saturday night against the Victoria Royals (12-8-2-0). Puck drop is at 9 p.m. Regina time at Save-On-Foods Memorial Arena. The Pats were last in action on Wednesday in Edmonton and came back from down 2-0 to beat the Oil Kings 4-2. The Royals last played on Tuesday at home to Prince Albert and won 3-1. Tonight is the first and only meeting of the season between the two clubs. Tonight’s game can be heard on 620 CKRM Bennett Dunlop Ford Pats Hockey beginning at 8:35 p.m.

Lead Up: Pats Come From Behind to Beat Oil Kings
The Regina Pats battled back from a 2-0 deficit in the second period to win their 11th straight game, 4-2 in Edmonton over the Oil Kings on Wednesday night. Davis Murray and Lane Bauer scored for Edmonton to take the lead. Sam Steel responded late in the second on the powerplay with his team leading 17th to get the Pats within one heading to the third. In the final frame, Connor Hobbs tied it, Chase Harrison scored the game winner and Nick Henry sealed it with an empty netter. Jordan Hollett made 15 saves to win his 6th game in his 7th start of the year. The Pats outshot Edmonton 43-17 in the victory. Steel led the offence with a goal and two assists and is up to 37 points on the year.

Franchise Mark
The Pats have started the 2016/17 campaign with a 15-0-3-0 record. That has tied a franchise record for games to start a season without a loss in regulation at 18 games. The first time it happened was in 1964-65 when the Pats were a member of the SJHL. The Pats are currently riding an 11 game winning streak, the last time that happened was in the 1947-48 season. Over the streak, the Pats have outscored their opponents 72-35 and are currently three points ahead of Moose Jaw for first place in the East Division and have three games in hand.

Four Pats on CSS November Rankings
The NHL’s Central Scouting Service released their November Players to Watch List for the 2017 NHL Entry Draft on Thursday. Four members of the Pats were on the list. Forward Jake Leschyshyn who has 24 points in 18 games is ranked a ‘B’ skater as a potential second to third round pick. Nick Henry is also ranked a ‘B’ skater, the Portage la Prairie, Manitoba product has scored eight goals and has 19 points in 18 games. Forward Lane Zablocki also made the list as a ‘B’ skater. The second year forward has 15 points in the Pats 18 games on the year. Finally goaltender Jordan Hollett was ranked a ‘C’ skater as a potential fourth to sixth round pick in 2017. The Langley B.C. native has started seven games and has a 6-0-1-0 record with a 2.68 G.A.A. and a .909 save percentage.

Man of Steel
Pats forward and Anaheim Ducks first round pick Sam Steel is enjoying the best production of his WHL career in his third season. The 18-year-old from Sherwood Park, Alberta has scored 17 goals in 16 games and is leading the league with 37 points. Over the last six games, Steel has recorded at least one goal and one assist in each contest. Steel has at least a goal and an assist in 10 of his 16 games played this year. He is currently riding a seven game point streak, with eight goals and 10 assists over that stretch.