PREVIEW: Pats Visit Raiders in Back Half of Home and Home 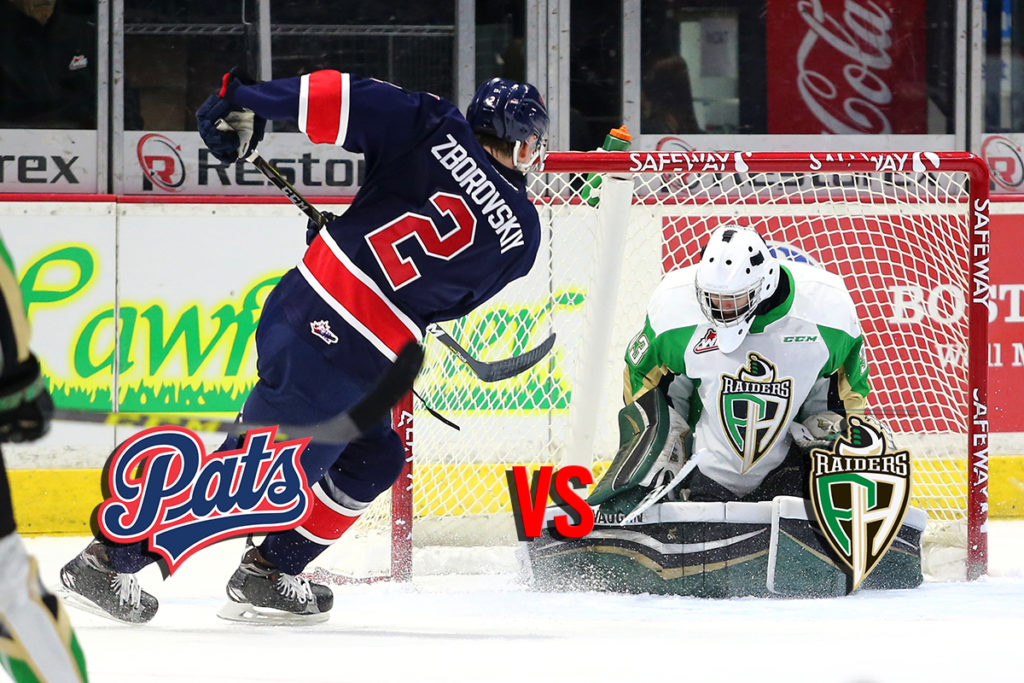 The Regina Pats (28-5-6-1) hit the road Sunday for the back half of a home and home with the Prince Albert Raiders (8-32-3-2). Puck drop is at 4 p.m. at the Art Hauser Centre. The Pats erased a four goal deficit after the first period on Saturday night to beat the Raiders 7-6 in overtime. Tonight is the seventh of eight meetings between the two clubs. The Pats are 5-0-1-0 in the previous five matchups. The game can be heard on 620 CKRM with Bennett Dunlop Ford Pats Hockey beginning at 3:35 p.m.

Lead Up: Brooks Spurs Pats Past Raiders Saturday
The Regina Pats overcame a 4-0 first period deficit to beat the Prince Albert Raiders 7-6 in overtime on Saturday night at the Brandt Centre. Regina scored three times in the second to get within a goal heading to the third. Prince Albert didn’t go away however, restoring their lead to two goals, twice in the final stanza. However the Pats kept coming and with the extra attacker, Adam Brooks scored with 8.5 seconds left to tie the game 6-6 and force overtime. 18 seconds into the OT period, Brooks ripped a shot into the top of the net for his second of the night and it gave the Pats the 7-6 victory. Brooks and Sam Steel led the club with three points apiece while Max Paddock stopped 13 of 15 shots in a relief effort to pick up his second win in as many WHL appearances.

Head to Head
The Pats hold a 5-0-1-0 record against the Raiders on the season. Prince Albert won the first meeting, 4-3 in overtime on September 23. The Pats have won five in a row since then. Regina has outscored the Raiders 41-15 in the first six games. Adam Brooks leads the Pats with five goals and six assists for 11 points in four games against Prince Albert. Austin Wagner and Jake Leschyshyn are next with nine points apiece. The Raiders are led by Simon Stransky who has three goals and three assists for six points against the Pats. Kolten Olynek and Carson Miller are next with three. The Pats have scored 34 goals in the last four matchups and given up ten.

Lockner Rolling
Pats 16-year-old forward Bryan Lockner is enjoying a solid second half of his rookie season in the WHL. The Windsor, Colorado product has goals in consecutive games. In nine contests since the Christmas break, Lockner has three goals and an assist for four points and is a plus one. Conversely, Lockner had one assist in his first 21 games of the year.