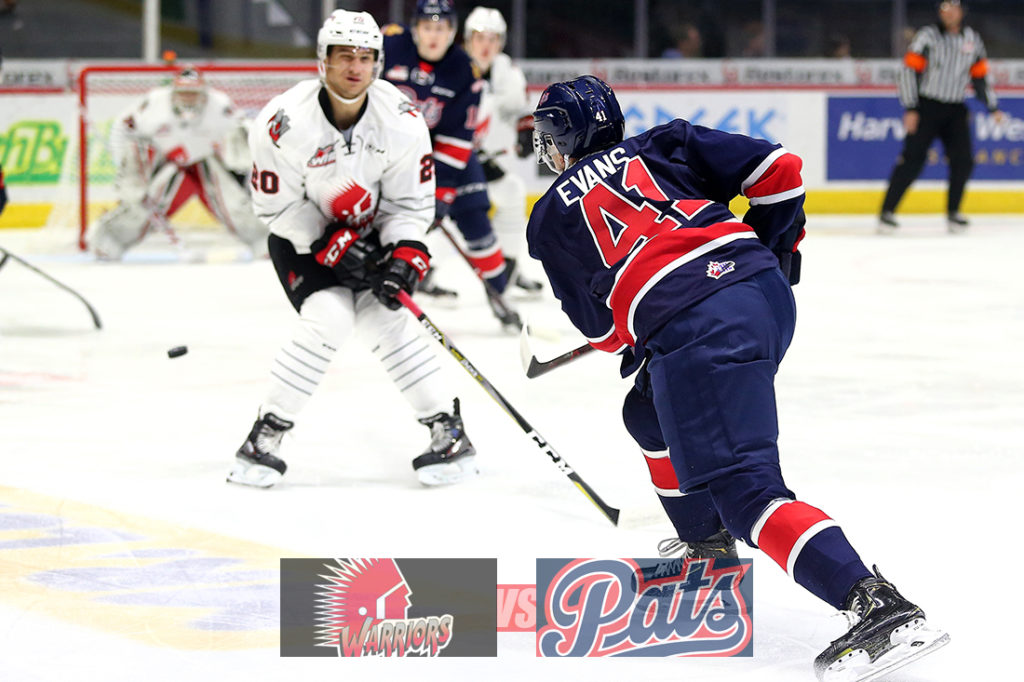 The Regina Pats (18-43-1-2) are on the road Saturday for the back half of a home and home set with the Moose Jaw Warriors (36-19-6-2). Puck drop is at 7:00 p.m. at Mosaic Centre. The Pats hosted the Warriors on Friday night and dropped a tight one, 3-1 to Moose Jaw at the Brandt Centre with the Warriors scoring an empty netter in the dying seconds. Tonight is the eighth and final meeting between Regina and Moose Jaw in the 2018-19 season, the Pats are 1-6-0-0 in the season series. Tonight’s game can be heard with Bennett Dunlop Ford Pats Hockey starting at 6:35 p.m. on 620 CKRM.

The Lead Up: Pats drop a tight one to Moose Jaw Friday
The Regina Pats lost a tight one, 3-1 to the Moose Jaw Warriors at the Brandt Centre on Friday night. In the first, the Pats scored the first goal just as their first powerplay of the game expired. Ty Kolle got a shot away from the top of the right circle to score his 14th and Regina led 1-0, four minutes in. Moose Jaw found the tying goal five minutes later on the powerplay from Justin Almeida and 43 seconds later, Carson Denomie scored to make it 2-1 Warriors and that was the score after the first. In the second, the Warriors outshot Regina 9-6 but neither team would score, and it was 2-1 after 40 minutes. In the third, the Pats outshot Moose Jaw 7-4 but the Warriors got an empty net goal with 19 seconds left to lead 3-1 and take the two points. The Pats were outshot 32-20, the powerplay was oh for four, the penalty kill was three for four, while Max Paddock made 29 saves on 31 shots in a first star performance.

Pouteau Vs Moose Jaw
Pats defenceman Brady Pouteau picked up an assist on Friday night against the Warriors and has a goal and three assists in five games in the season series. The overager has points in four straight games against Moose Jaw with a goal in the team’s last meeting in Moose Jaw on February 23, an assist on the road on February 16 and another assist in the Friendly City on December 15. Only Austin Pratt has more points against the Warriors this season, scoring three times and adding two assists in seven games. Pouteau has put up three goals and four assists for seven points in his last eight games and sits just a point back of Nikita Sedov for the team lead in defence scoring on the season. 13 of Pouteau’s 15 points on the year have come in the 29 games since the Christmas Break.

Paddock’s Strong Outing
Pats goaltender Max Paddock was named the first star on Friday, thanks to his 29 saves and just two goals against on home ice. The 18-year-old has had a stellar second half of the year, posting a .913 save percentage, a 3.03 goals against average and one shutout in 17 games. He has put up a record of 5-11-0-1 in that stretch. The Brandon product currently ranks 24th in the Western Hockey League with a 3.55 goals against average and his .884 save percentage is 26th in the league.