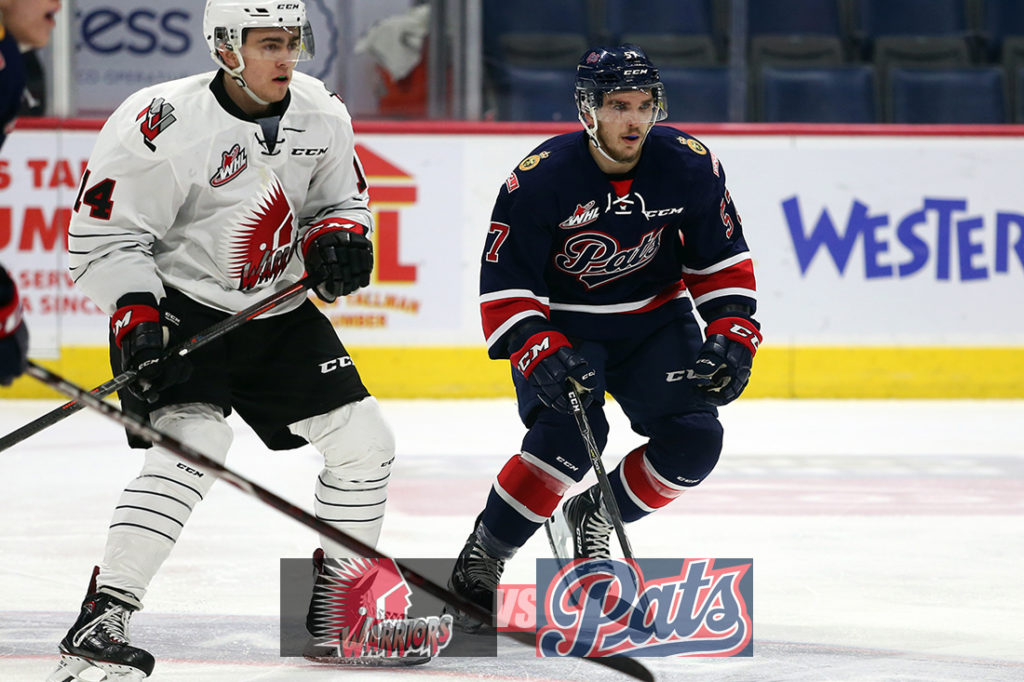 The Regina Pats (18-38-1-2) hit the road on Saturday for an afternoon contest against the Moose Jaw Warriors (32-16-2-2). Puck drop is at 2:30 p.m. at Mosaic Place. The Pats have won five of their last eight games including their last contest on Friday night at home, 5-4 in overtime over the Calgary Hitmen. The Warriors were in Swift Current last night and picked up a 4-2 win over the Broncos. Tonight is the sixth of eight meetings between Regina and Moose Jaw in 2018-19, the Pats are 1-4-0-0 in the season series. Tonight’s game can be heard with Bennett Dunlop Ford Pats Hockey starting at 2:05 p.m. on 620 CKRM and the game will be broadcast on Rogers Sportsnet.

The Lead Up: Logan Nijhoff’s OT winner lifts Pats over Calgary Friday
Logan Nijhoff scored 30 seconds into overtime to lift the Regina Pats to a 5-4 victory over the Calgary Hitmen on Friday night at the Brandt Centre. In the first, the Hitmen opened the scoring six minutes in thanks to Mark Kastelic. The Pats drew even when Carter Massier set up Garrett Wright in front, he buried his fifth to make it 1-1. Three minutes later, Duncan Pierce scored his eighth of the season in his first game back from injury and the Pats took the 2-1 lead. Calgary got the game back to even late in the frame on the powerplay and it was 2-2 after the first. In the second, the Pats took the lead back on the powerplay, Austin Pratt with his 23rd and it was 3-2. Regina got the lead to two goals when Carter Massier scored on a shorthanded breakaway, his fourth, to make it 4-2. Calgary responded with two goals in the final five minutes of the frame and it was 4-4 after two periods, the third was scoreless forcing overtime and in it Logan Nijhoff skated up the left wing and buried his seventh of the year into the top of the net to give the Pats the 5-4 win.

Massier’s Career Night
Pats rookie forward Carter Massier put up his first multi-point game of his WHL career on Friday against Calgary with a goal and an assist. The 17-year-old is playing his best hockey of the season, scoring goals in three of his last four games, two of those coming shorthanded. A product of Peace River, Alberta, Massier is tied for the league lead among WHL rookies with two shorthanded goals this season.

What a Stretch
The Pats as a team have put together their best stretch of the season over the last month. The club has won five of their last eight contests, outscoring their opponents 27-26 in that stretch. The Pats are 6-5-0-1 in their last 12, dating back to January 26. Austin Pratt has put up six goals and 10 points in the 12 games, Sebastian Streu, Nikita Sedov and Ty Kolle all have seven points and Sergei Alkhimov has six points in that span.

Gordie Howe Hattrick
Pats leading scorer Austin Pratt picked up a Gordie Howe Hat trick on Friday night, scoring a goal, an assist and a fight in the win over Calgary. The 19-year-old has goals in four of his last five contests and has recorded eight points in his last seven games. He leads the club with 23 goals and 47 points, all are career highs.