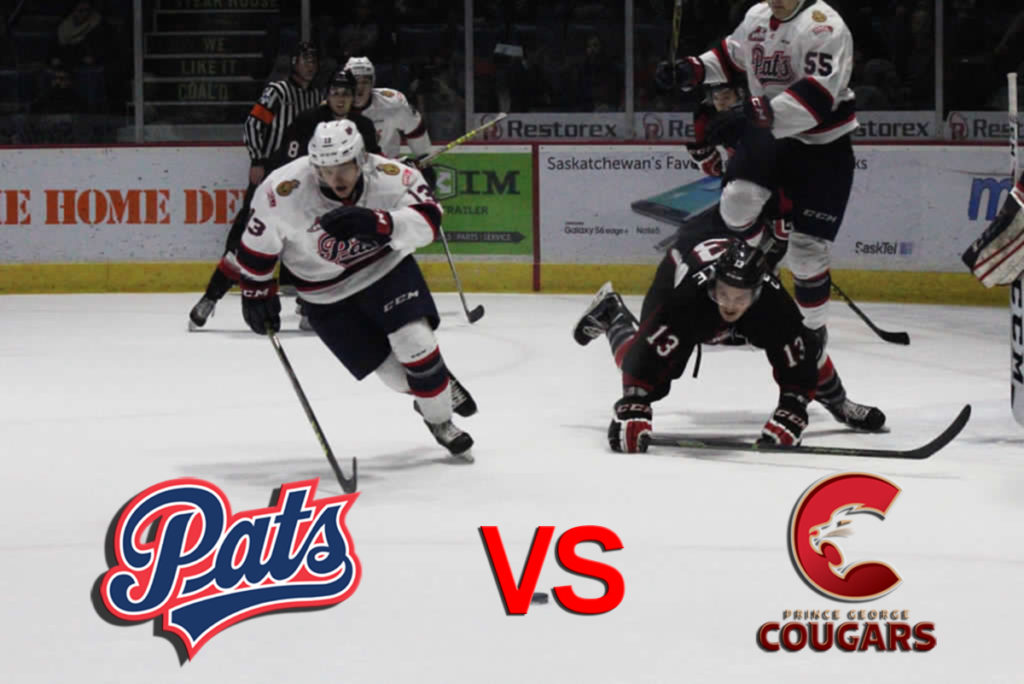 The Regina Pats (16-1-3-0) are in Prince George on Tuesday in a battle of Conference leaders with the Cougars (17-4-2-0). Puck drop is at 9 p.m. Regina time at the CN Centre. The Pats bounced back in a big way after losing their first regulation game on Saturday and beat the Vancouver Giants 8-3 Sunday afternoon. The Cougars were last at it on Friday and beat the Prince Albert Raiders 4-2 for their third straight win. Today is the first and only meeting of the season between the two clubs. Tonight’s game can be heard on 620 CKRM Bennett Dunlop Ford Pats Hockey beginning at 8:35 p.m.

Lead Up: Pats Rout Giants Sunday
The Regina Pats scored four times in the first on the way to an 8-3 win over the Vancouver Giants on Sunday afternoon. Adam Brooks got the offence started with a goal and two assists in the opening frame and ended with a four point night. Brooks has points in every game since returning from training camp with the Toronto Maple Leafs (8G, 24A). Sam Steel also had three points while Connor Hobbs, Luc Smith and Filip Ahl each had a goal and an assist. Nick Henry added two goals and goaltender Jordan Hollett made 21 saves to win in his hometown.

Road Warriors
he Pats carry a 7-1-0-0 road record into Tuesday night in Prince George. In those eight road games, the Pats have outscored their opponents 44-27. The teams road powerplay is second best in the WHL at 32.4 percent, scoring 12 times in 37 opportunities. The penalty kill is at 80.5 percent, going 32 for 41 and in those eight games have scored three shorthanded goals. In total the Pats have picked up 14 of 16 possible points away from the Brandt Centre.

Brooks Streaking
Pats captain Adam Brooks continues to light up the score sheet in his 5th and final season in the WHL. The Maple Leafs prospect is currently riding a 14 game point streak with eight goals and 24 assists. If you go back to the beginning of January, Brooks has recorded 119 points so far in the calendar year if you include the playoffs. Going back to the start of the 2015/16 season, Brooks has at least a point in 68 of 86 regular season games played.

Pats Acquire Draft Pick from Kootenay
The Pats announced Monday, the team has acquired a 9th round pick in the 2017 WHL Bantam Draft from the Kootenay ICE in exchange for 18-year-old prospect Jake Elmer. Elmer played in 20 games in a Pats uniform between 2014/15 and 2015/16. This year he was a member of the AJHL’s Grande Prairie Storm. Elmer was originally a 6th round Bantam pick in 2013.

Mastercard Memorial Cup
The Regina Pats have been chosen as one of three teams that will bid to host the 2018 Mastercard Memorical Cup. The Canadian Hockey League announced Monday that the Pats, and the OHL’s Oshawa Generals and Hamilton Bulldogs will be the three finalists to host the 100th anniversary of the Memorial Cup tournament. The Pats played in the first ever Memorial Cup in 1919 against the University of Toronto Schools. Regina has four Memorial Cups to its name, in 1924 and 25 as the Monarchs and in 1930 and 1974 as the Pats.